Just over 2 months and we have finally left Greece. It actually turned out to be the longest single stretch in one country. We weren’t planning to stay here quite as long but that’s the beauty of being flexible, and being in Europe. We have probably gone on enough about it being a cold winter but we were lucky to hide out the worst of it and catch up with family and friends. Extremely glad to have spent time with my Mum, sister, brother-in-law, and niece, over Christmas, then Geoff and Sue, Andy’s parents at the end of January. It had been about a year since we’d last seen them all and we thoroughly enjoyed seeing them all and spending some time with them. Following that having the opportunity to catch up with Annie and Paddy was also just what we needed. 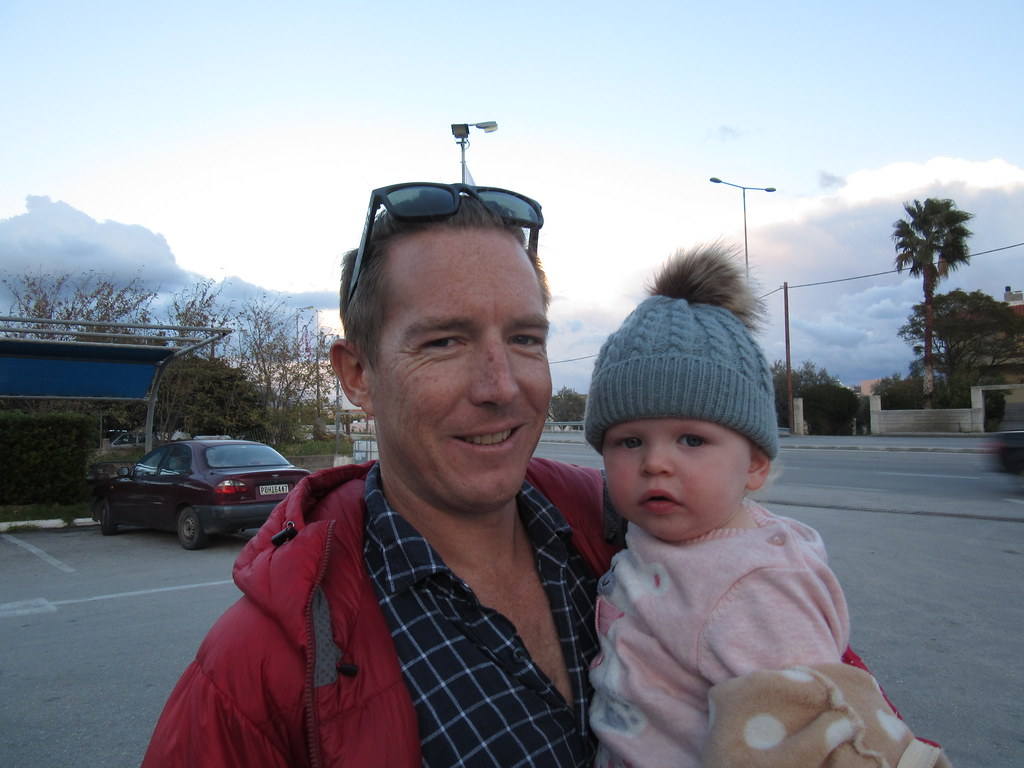 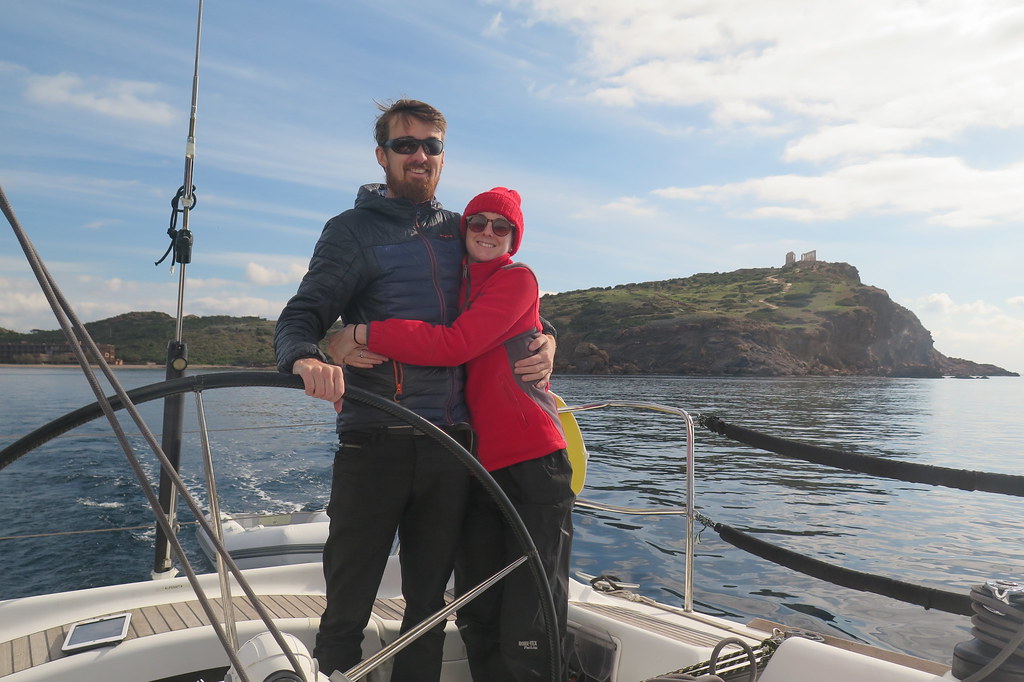 So, Greece! Another new country for us both and somewhere that had been on the list of places we’d wanted to visit for a while. Considering it was late December and January it still had a lot to offer. It was the best option for this time of year and even though we were unlucky with a colder than usual winter we also had some gloriously sunny days too. 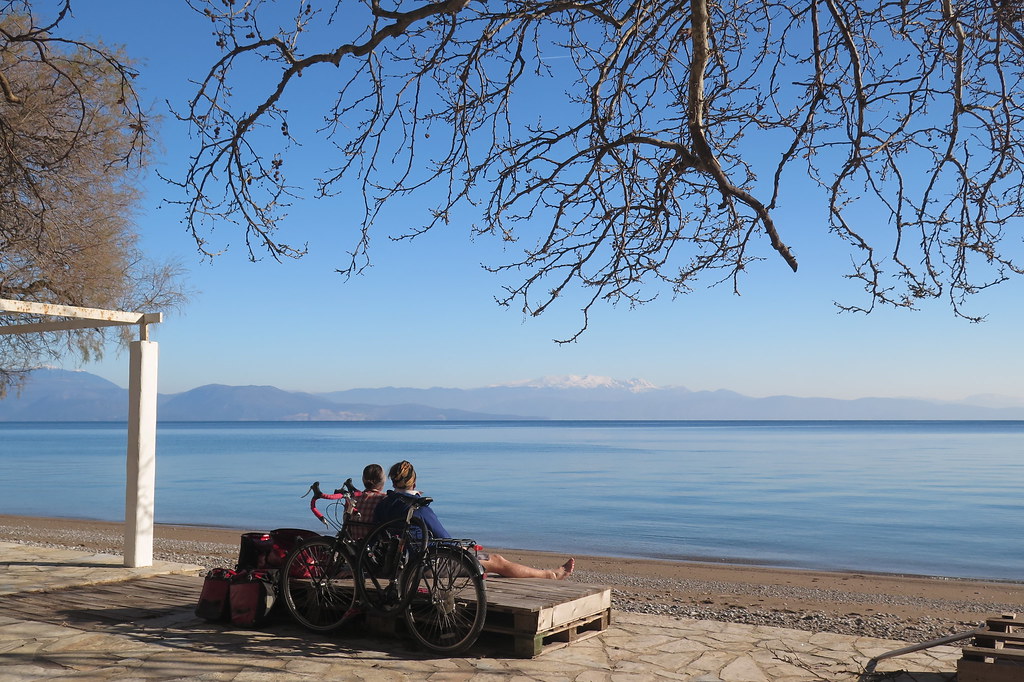 The islands, from the few we saw, are each so different and beautiful. We managed to clock up 11 in the end covering some in the Dodecanese and Cyclades. The majority of our time has been next to the sea, a place Andy and I love. We must have spent so many hours staring out hoping to see dolphins and just looking off into the distance! The colours are phenomenal, sometimes even more so when the sky is darker. I thought you only saw colours like this in places like Mauritius or the Maldives. 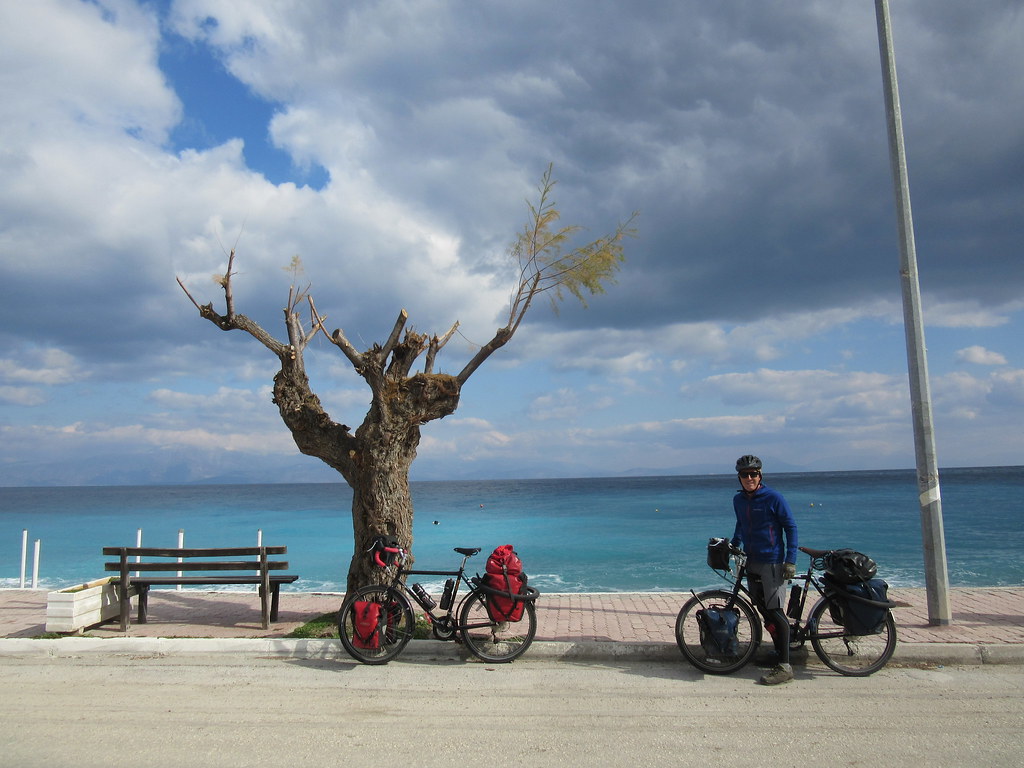 *Geography geek alert* We also marvelled at the different rock types as many of the islands are in active seismic areas including two islands, Milos and Santorini, that used to be volcanoes. Many of the islands have working mines, large areas are being quarried to extract stone (a lot of marble) and minerals. 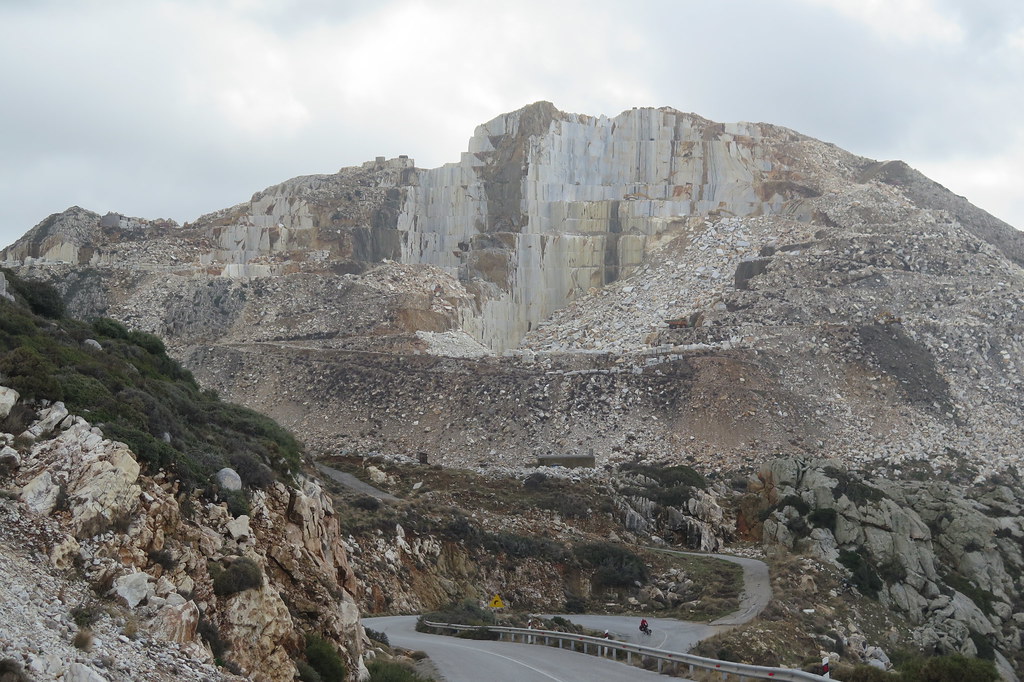 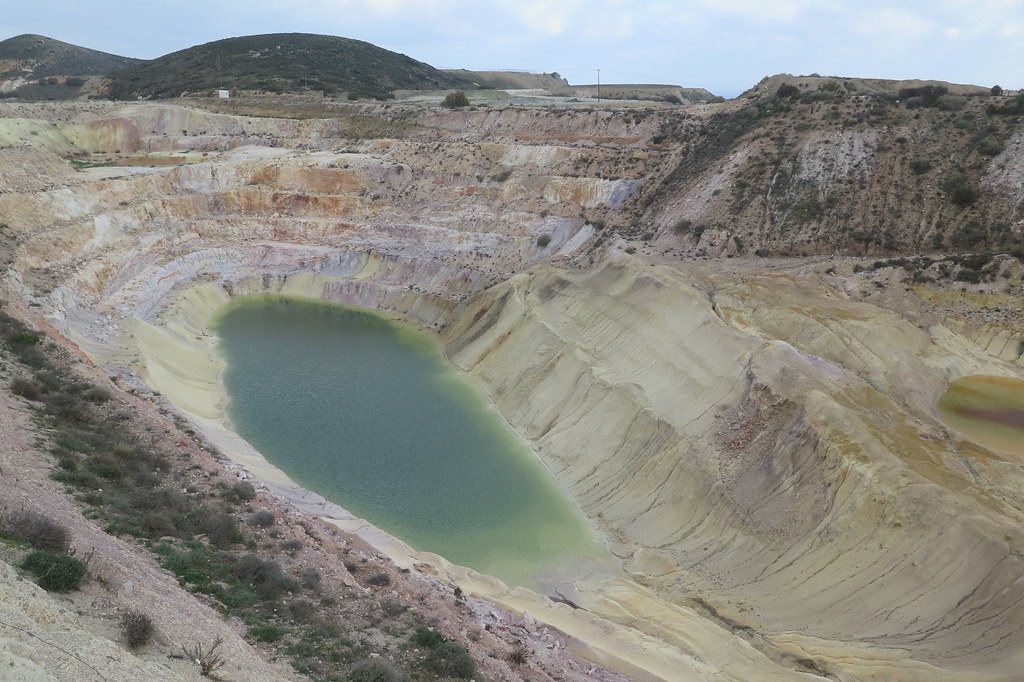 It meant there were again stunning colours and layers in the rock formations. 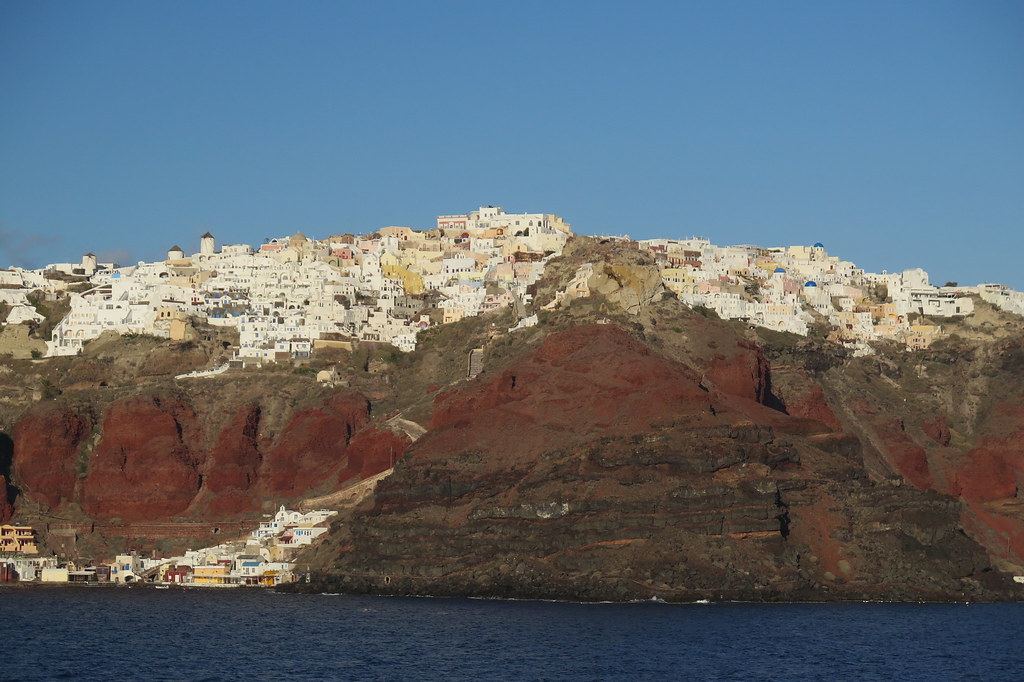 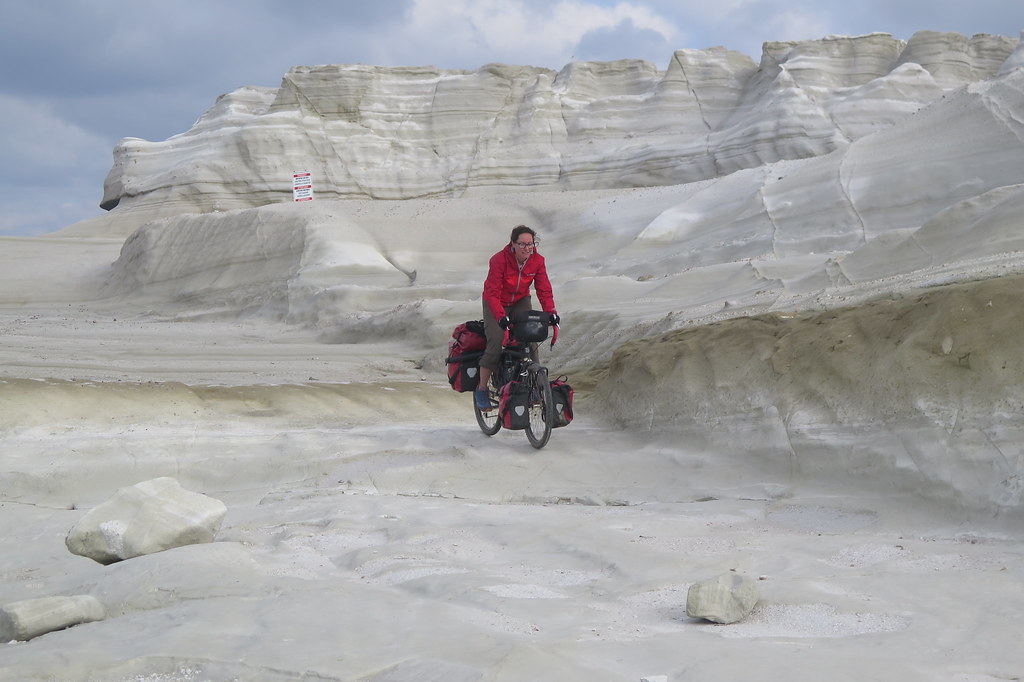 Few people lived on the islands we saw, mostly as the land was quite barren and only suitable for the goats and sheep. There are then lots of dogs about guarding these animals, most are behind fences, we’ve only had a few give chase. 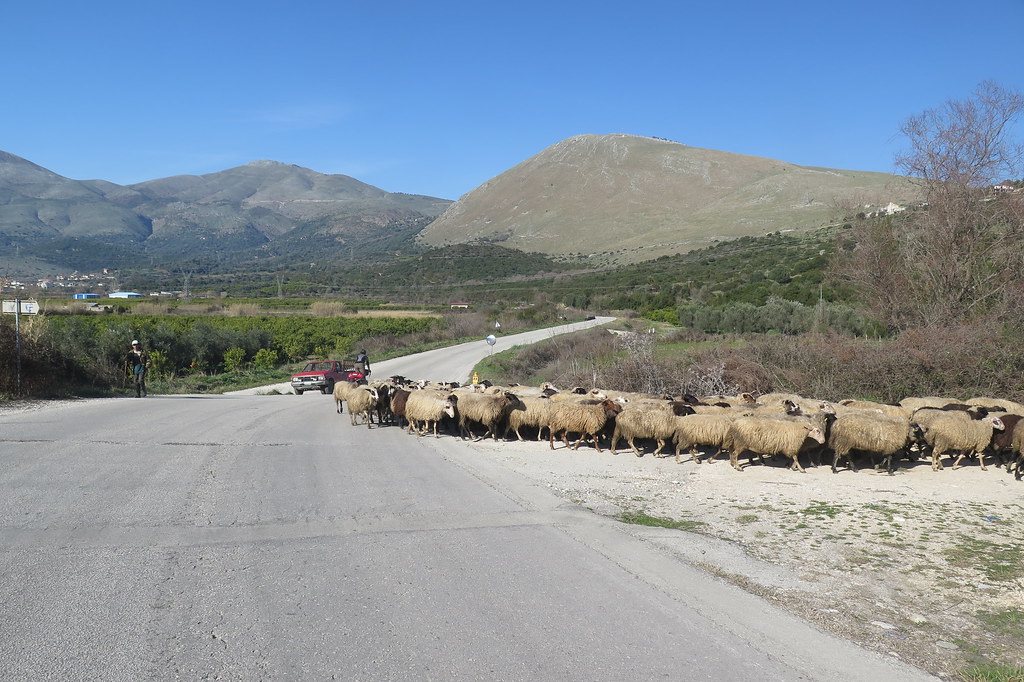 With it being the off season it meant we had a lot of places to ourselves. This was absolutely perfect for camping. Beaches that would be full of people and open bars/restaurants in the summer months were closed up and we were able to pitch a tent almost anywhere. I always prefer to camp on a public beach rather than chance it on someones land. It was always quiet and we felt safe. 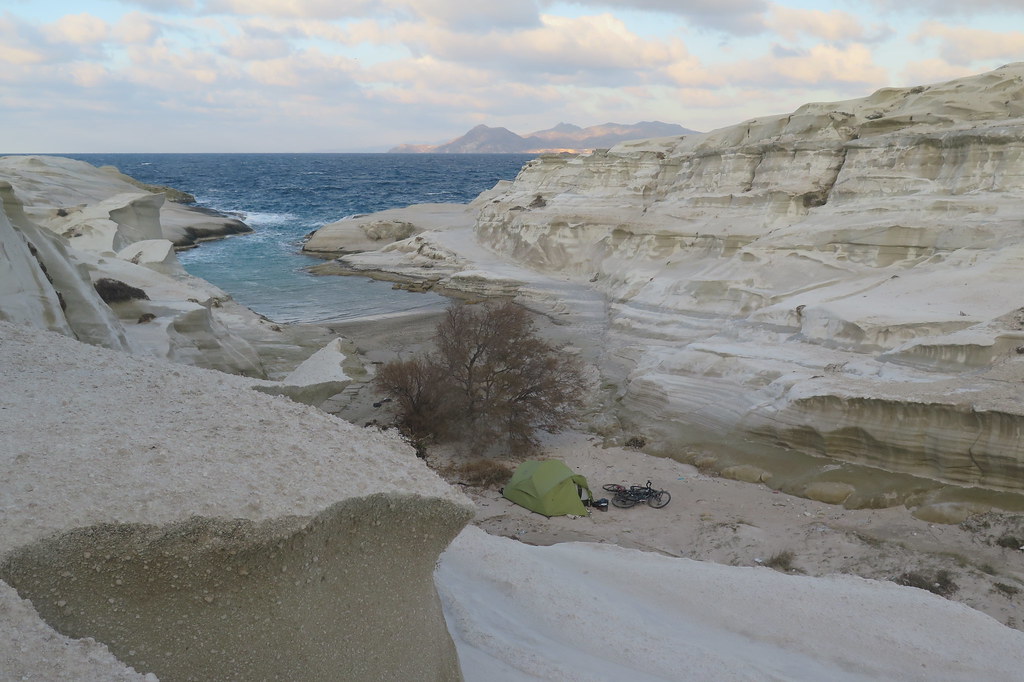 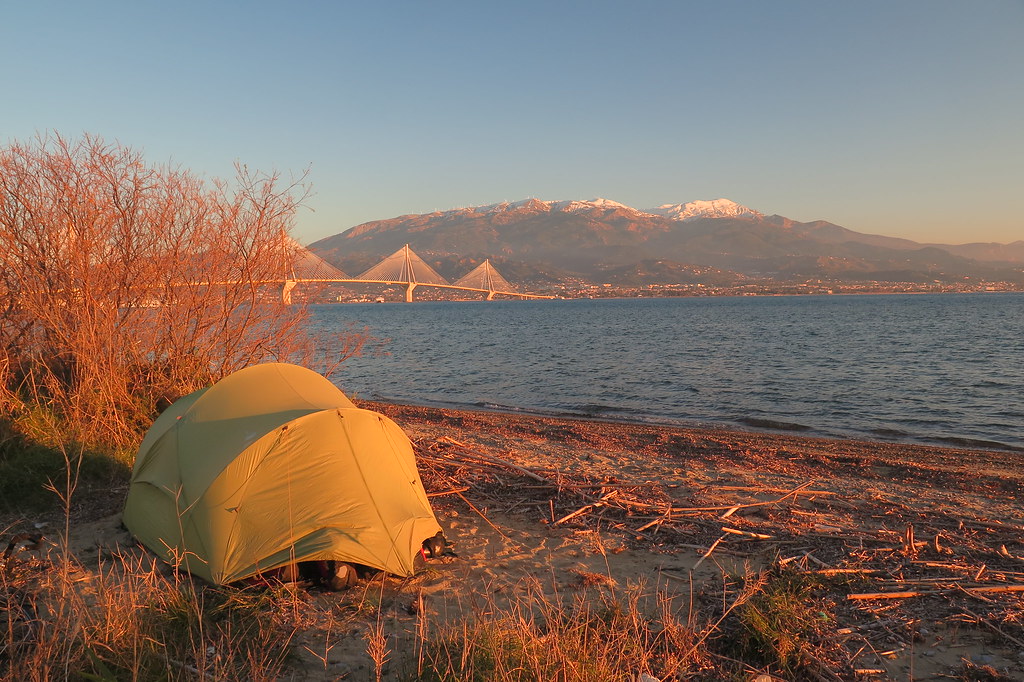 When we did decide to visit any tourist spots on the islands there was no one around making it free to visit, unless they were locked up of course. So being there out of season definitely had many advantages. 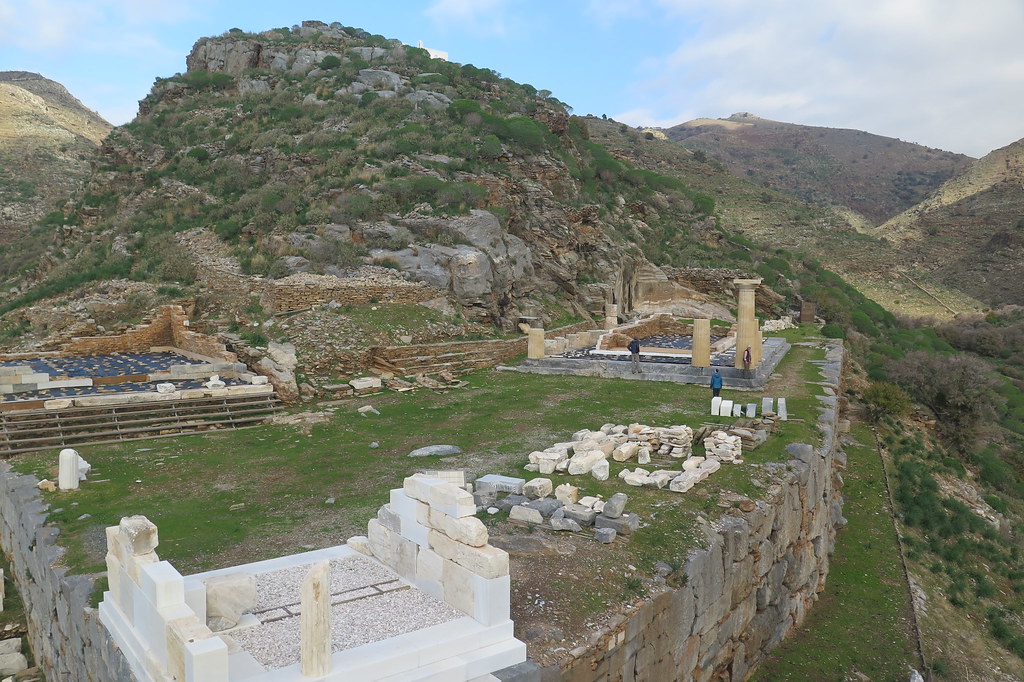 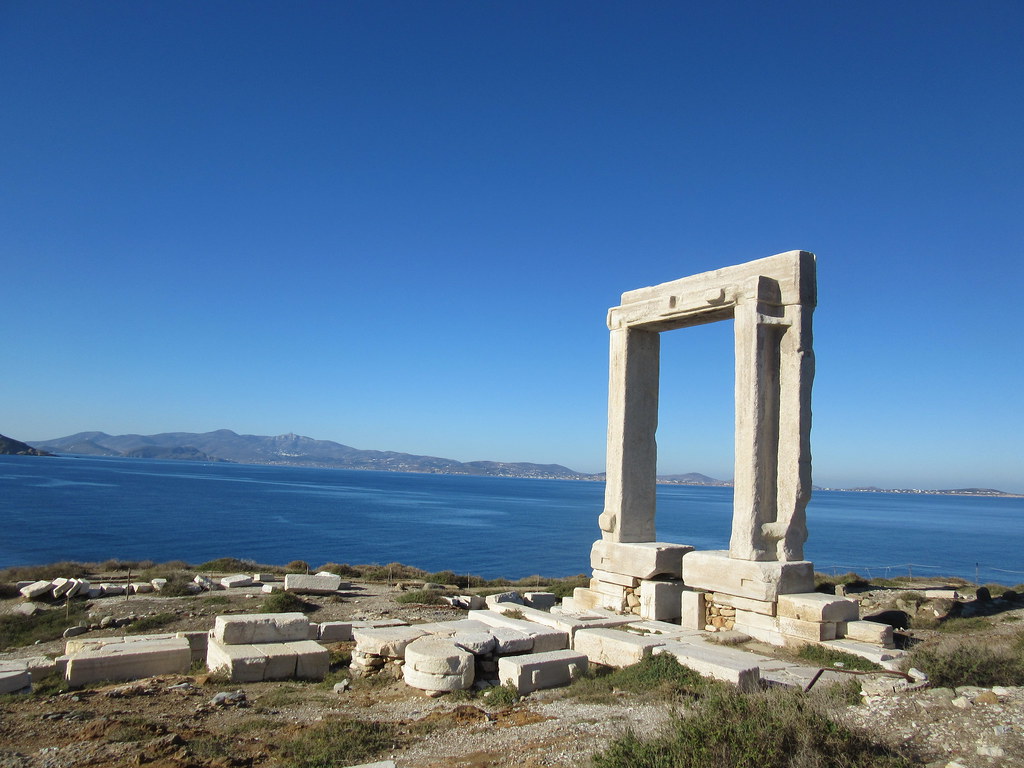 The only downside, other than the weather, was that there were fewer ferries between islands, and delays, but other than our long waits at Rhodes and Crete the rest were very reliable and on time. 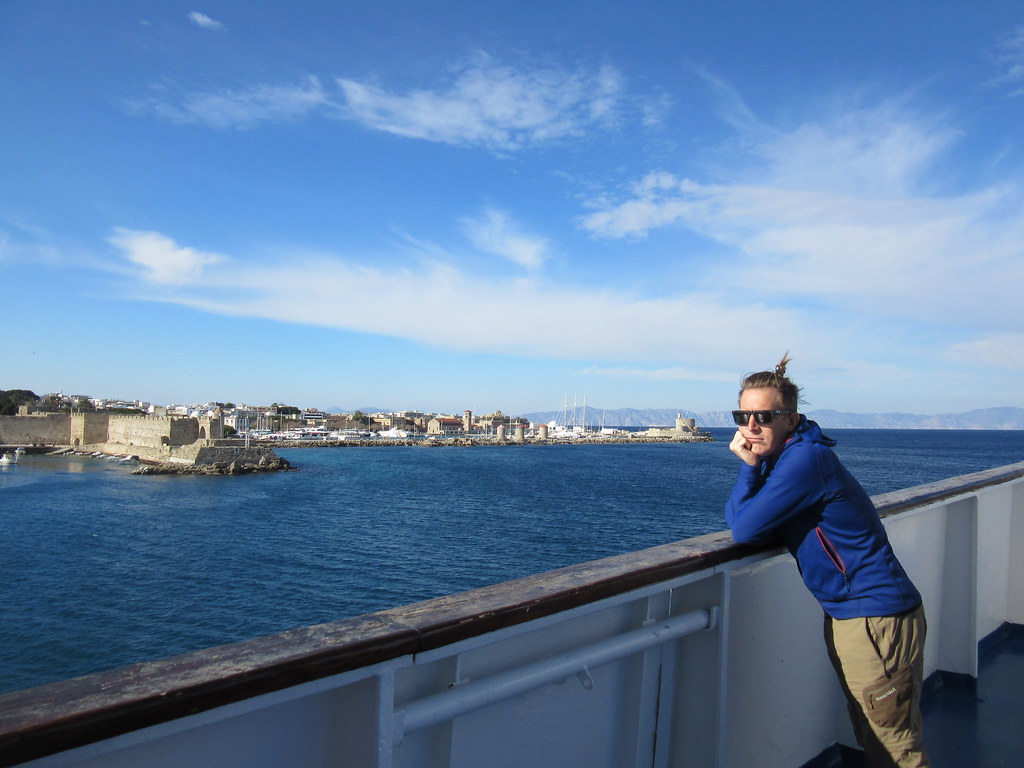 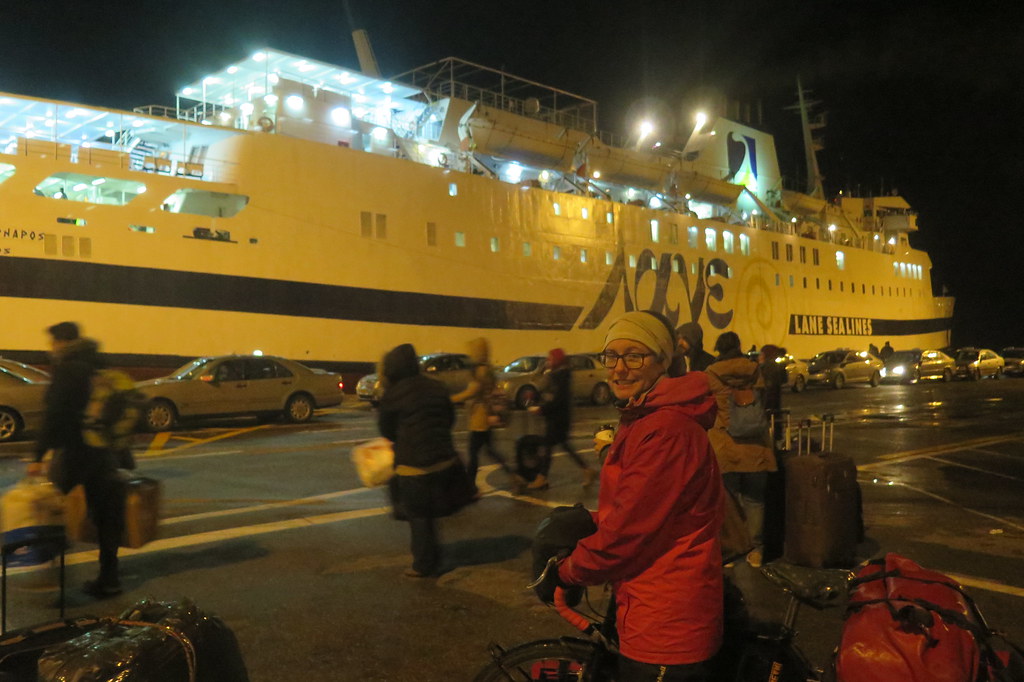 We have felt a difference coming onto Greek roads, people drive pretty fast, the roads are good but many are not that wide leaving us not that much room. On the whole, drivers give us space and seem quite courteous. We have sadly seen too many dead animals in the road, dogs, cats and badgers seem to be the most unlucky! Many of the roads follow the contours of the land, and Greece is quite a mountainous country. Following the sea has meant that we haven’t climbed too high up but it’s quite an undulating landscape, which does mean it is more interesting. 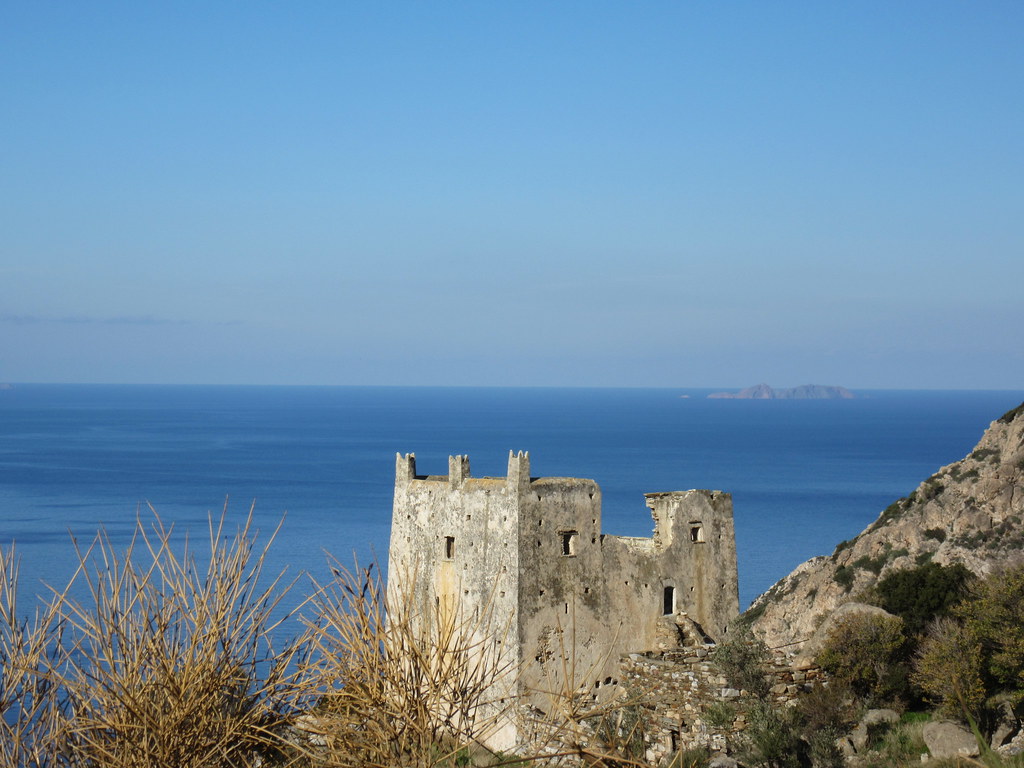 There are also enough shops and petrol stations along the way to make it easy to not have to carry too much with us until we are getting close to camping. We’ve been asking in petrol stations for water as there are few taps/springs in towns or on the roadside. There have been plenty of bins though.

We have now moved away from mosques being all around us to churches. On the islands, small, white churches, and on the mainland more ornate, large ones. They are all beautiful but we were amazed at how many there are. Maybe the small churches are for different Saints or to pray for different things, we’re not 100% sure but there were a lot and they were very pretty. There were also a lot of small shrines by the side of the road in remembrance of people who had been killed. 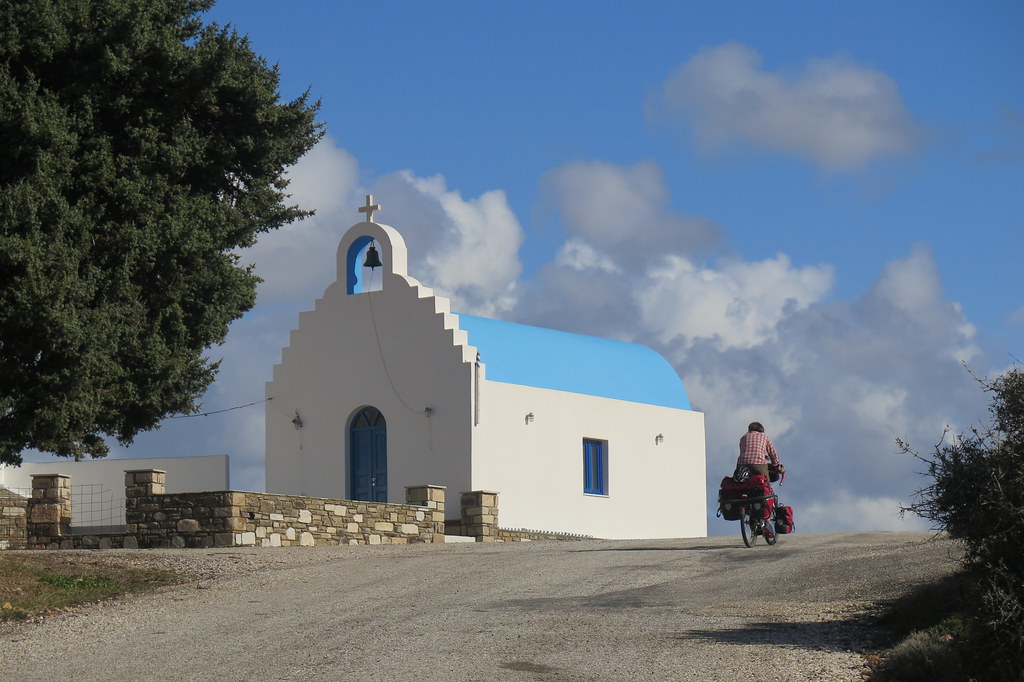 We could definitely feel we were back in Europe getting to Greece. We were visiting many tourist areas but we were amazed at how fluently most people spoke English, once again putting us to shame. We only ended up learning the very bare minimum words to at least look like we were trying with Greek. Overall we found people very friendly. They weren’t the most forthcoming but if we needed help and had to ask, people were always kind and helpful. When we did get speaking to people they were lovely, especially a couple of owners of places we stayed at. On a few of the quieter islands we got more waves and beeps of encouragement when cycling but overall people are less interested in what we’re up to. I’m sure they see plenty of tourists and a fair number travelling by bike. Also cycling is much more popular here, on the mainland most days we see road cyclists so it’s not as shocking to see touring cyclists as it has been in other places. One other random thing to note is the number of female drivers, after being in many conservative Muslim countries it now seems strange to see so many women driving, I’m sure this will soon change the longer we are in Europe.

For once I don’t think I have that much to say about food. We have tried a few traditional Greek dishes in our time here, one over Christmas when the lovely owners of the villa we were staying at cooked us a whole leg of lamb with some delicious beans. We’ve had some great seafood and some yummy Greek salads but otherwise we have been back to cooking a lot more for ourselves. As we have mentioned in previous blogs with an increase in prices we are trying to keep the costs down. We’re happy to be cooking again and have been enjoying some of the one pot wonders that we’ve produced. There is lots of delicious fresh produce to use, so it’s been great. 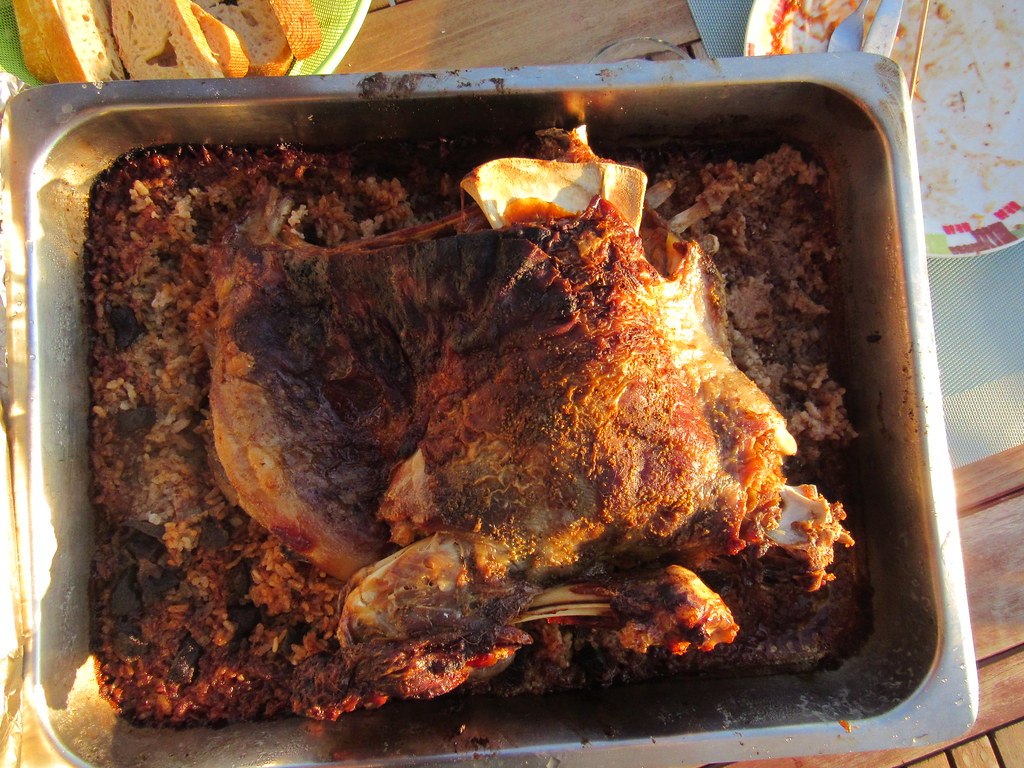 Overall we’ve really had a great time here. If it is this beautiful when it is out of season I can only imagine what it’s like when it’s a bit warmer and you can swim in the sea (not that this stopped Andy, I think I made it in once with clothes on and knowing I had a hot shower to go to). We are very keen to return in late spring or early autumn another time. We were extremely lucky to have stayed in some lovely accommodation when my family and Andy’s family visited. We also had an amazing opportunity to go sailing for a week thanks to Paddy and Annie. It was incredible to see the islands from a yacht and experience life on a boat, something neither of us have ever done. Let’s just say that Greece did not disappoint. 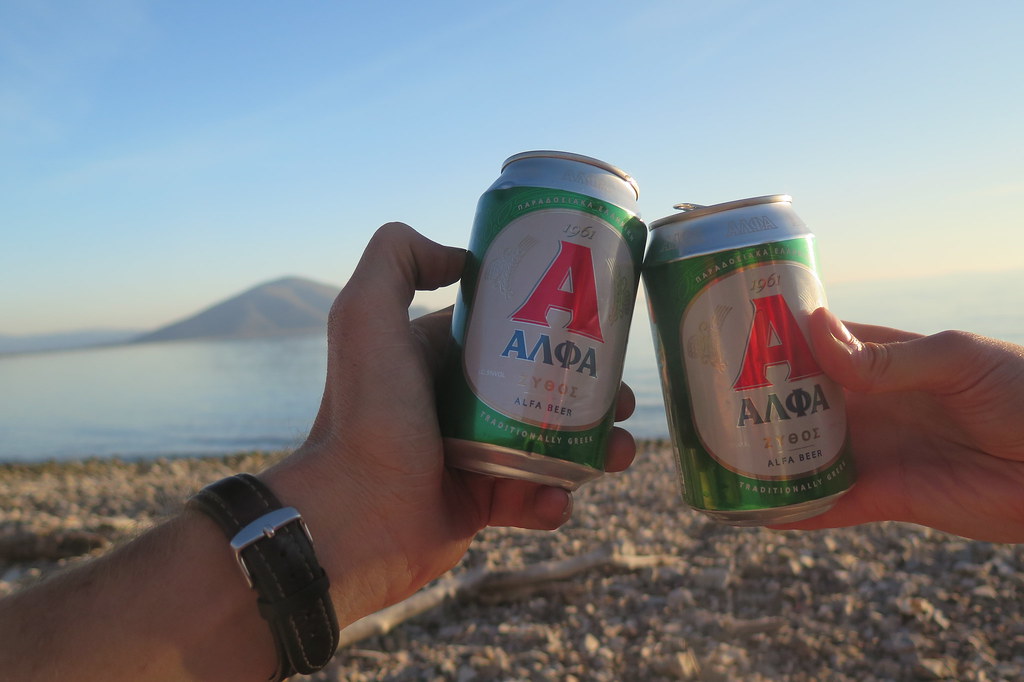 Highlight, there really have been a lot of great things we enjoyed but our first really enjoyable cycle in 2017 was when we were on Naxos, we had our first day of beautiful sunshine after snow and rain, and the island was just what we needed. We really loved our 2 days of cycling there. 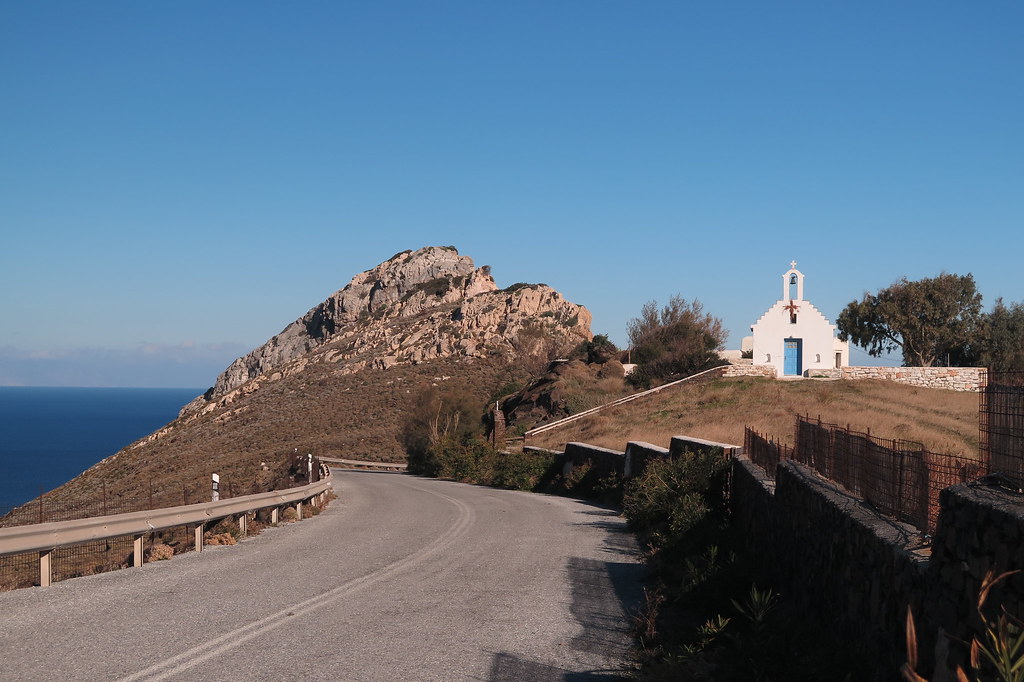 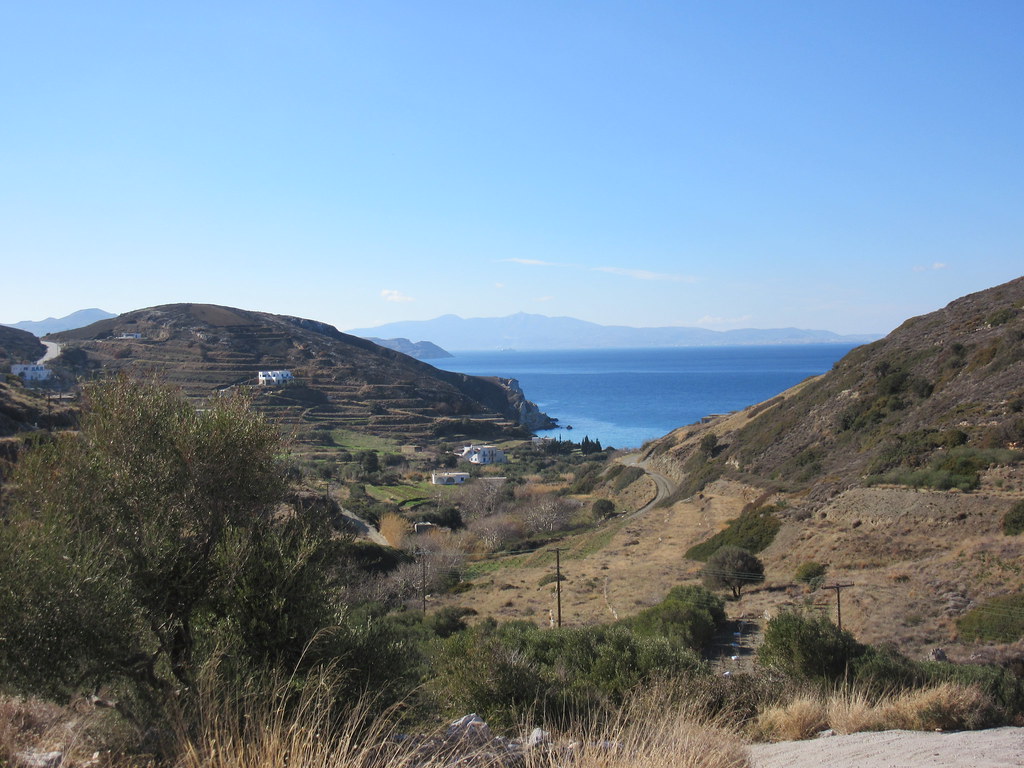 Lowlight, I think we might have mentioned this once or twice 😉 but of course the weather was our biggest frustration and when we were in Crete and didn’t see any of the island that was a big disappointment for us both. 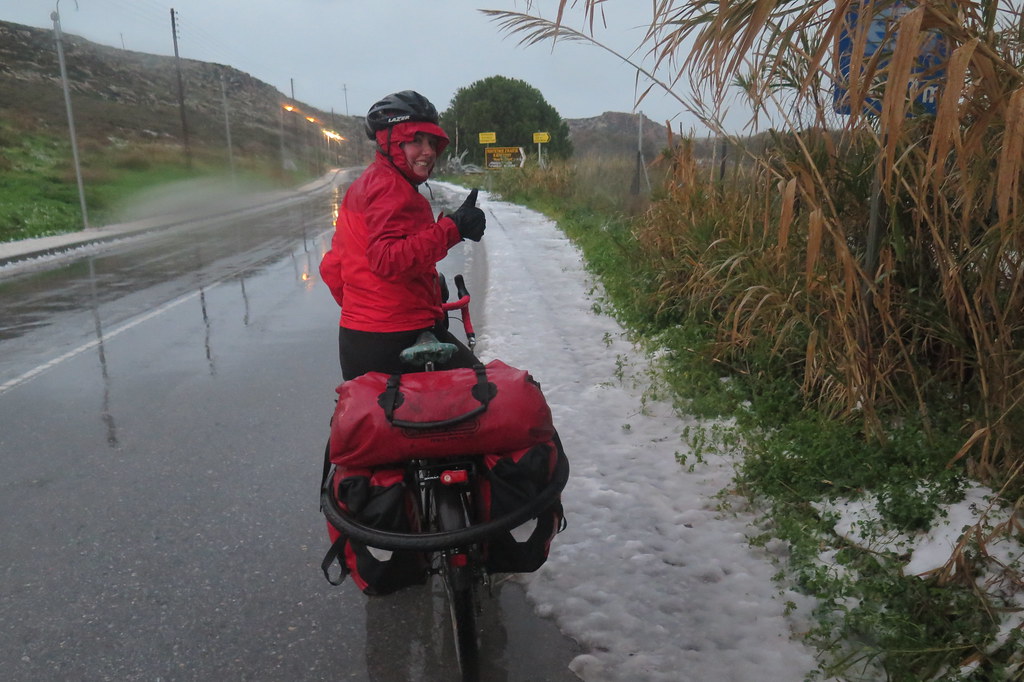