We haven’t done much since our last update. We’re into Albania now after a really lovely final few days in Greece. We were lucky with the timing of our rest day in Paleros, thunderstorms and heavy rain coming down all day outside our hotel window. It’s nice when it works out like that. It was still overcast when we left on the 20th, but it stayed dry. Our route took us inland up towards Preveza. There is a big lagoon in our way, with the option of passing through a tunnel, or taking the long way around the inside of it, adding about 100km. It’s a no brainer, the one issue being that bikes aren’t allowed in the tunnel. We stuck to our tried and tested method of ‘winging it’, hoping that smiling and playing dumb would work. Unfortunately, once we got to the toll booth, it was immediately clear that they wouldn’t let us pass on our bikes. But, they told us to wait beside the road, and that we’d be taken through in a service van. Perfect! We didn’t fancy riding through the tunnel anyway. 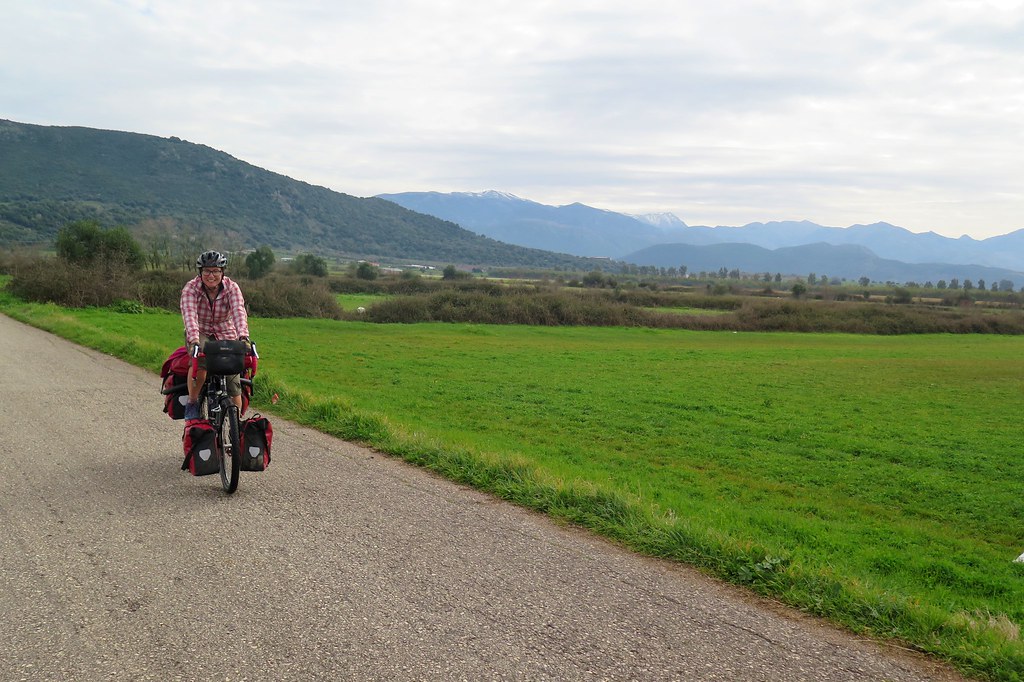 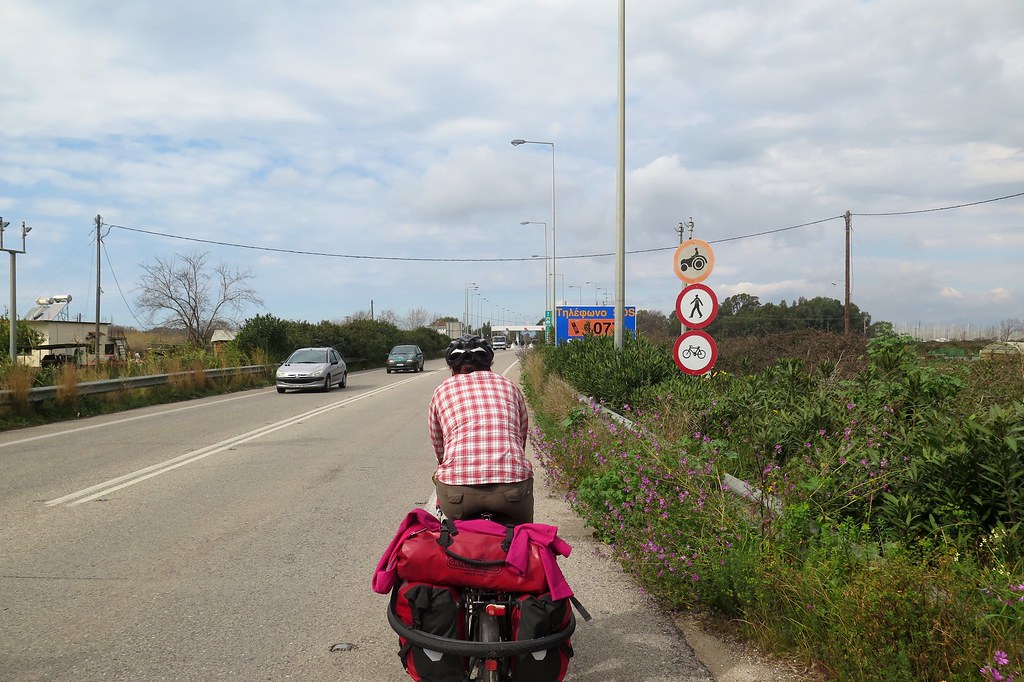 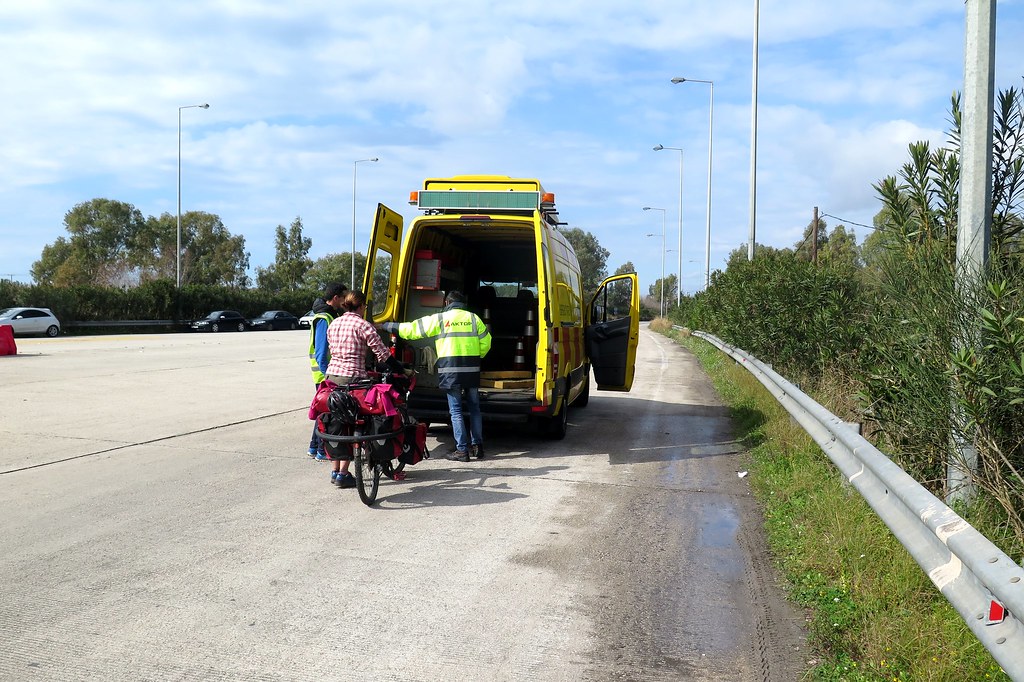 On the far side, we ducked into Preveza town to stop at a supermarket, and then headed a few kilometres north to a long stretch of beach that we’d seen on the map. It was a good spot to camp, right on the sand, accessed by a very quiet road with only a few dog walkers and joggers around. Facing west, we got the sunset and it stayed warm enough to eat our dinner outside. The only downside was that we didn’t catch any sun the next morning so we had to pack up our tent while it was still wet from the heavy dew. We took it out later in the morning to dry while we had our lunch in an orchard in the sunshine. 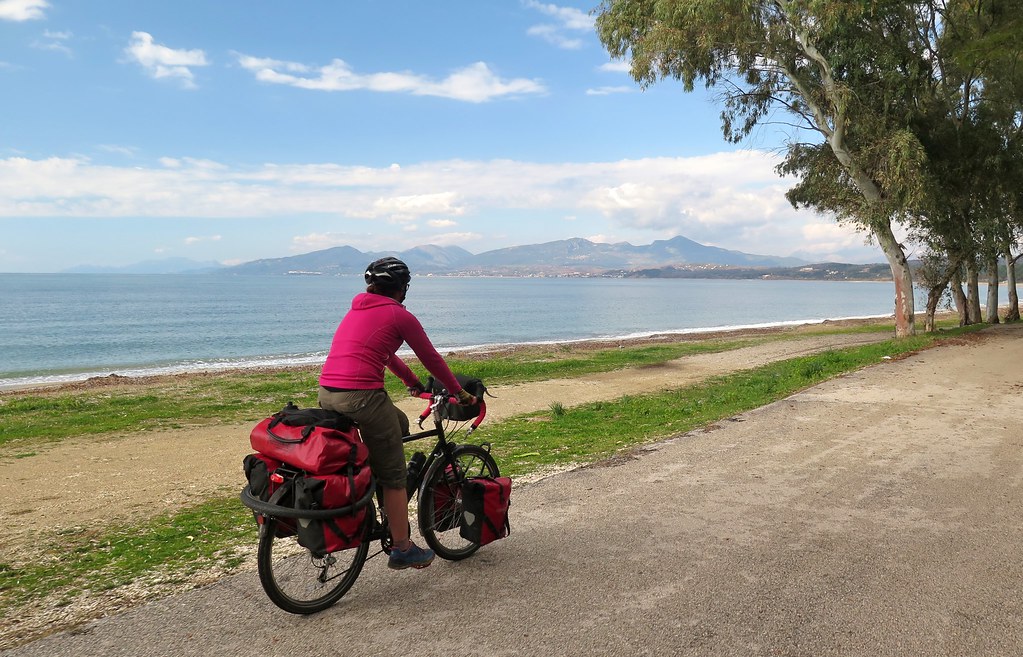 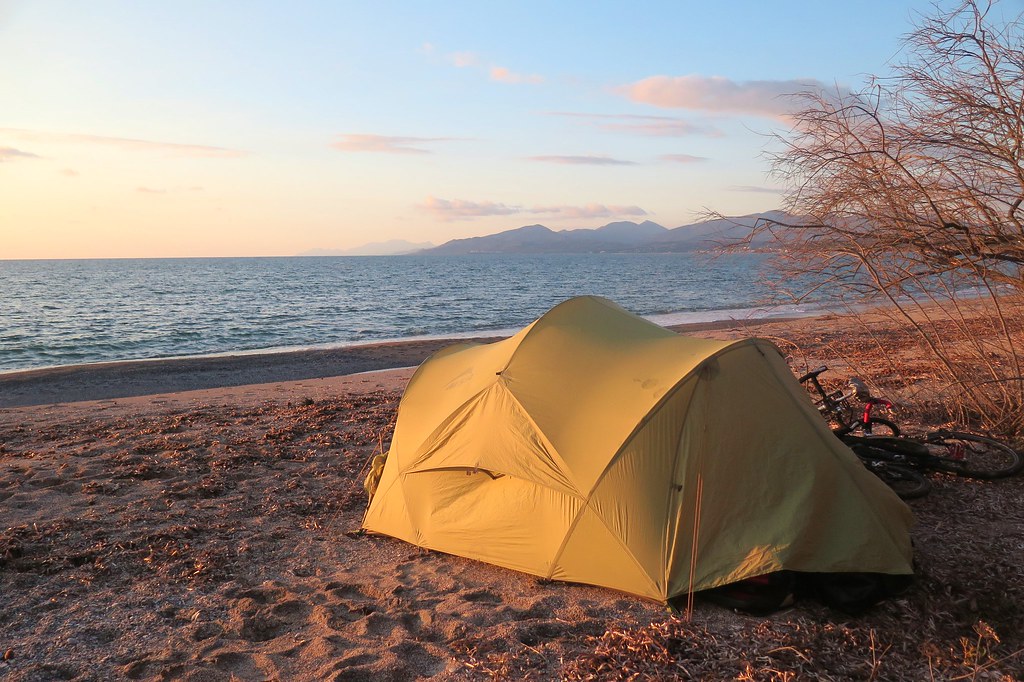 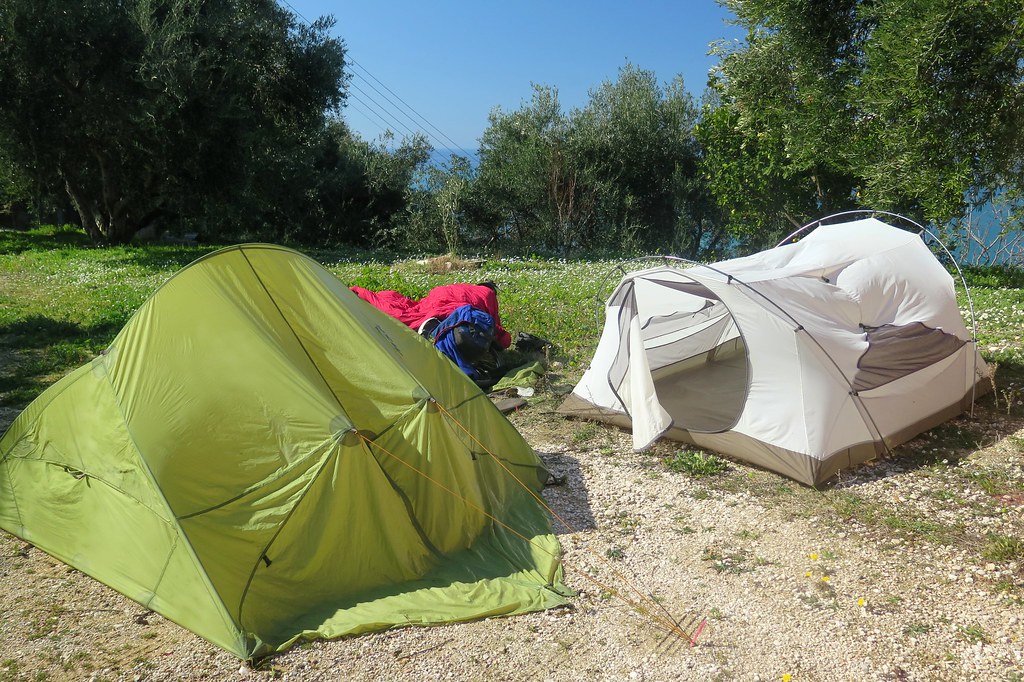 Most of that day was quite slow, riding uphill along the cliffs with the Ionian Sea to our left. At one point a guy in a Toyota pickup pulled alongside us and offered us a ride. Tempting, but we were fine and enjoying the view. Later in the afternoon we cut inland, through some wetlands and then alongside Kaneta Lake, a wildlife sanctuary. Our first reccy to find a campspot was a failure, the ground underfoot was marshy and very muddy. We pushed back up to the road and continued, until we found a picnic area overlooking the lake which was much better. It was a bit visible from the road so we waited a while, having dinner watching the birds, otters and coypu (which we’d never heard of) in the lake, before we put the tent up. 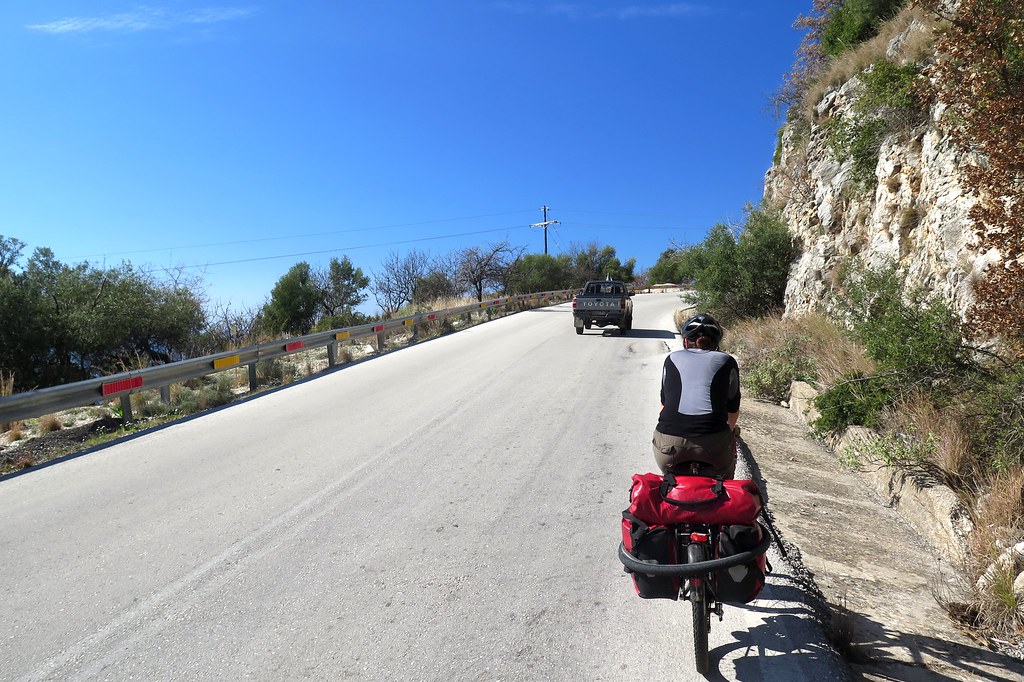 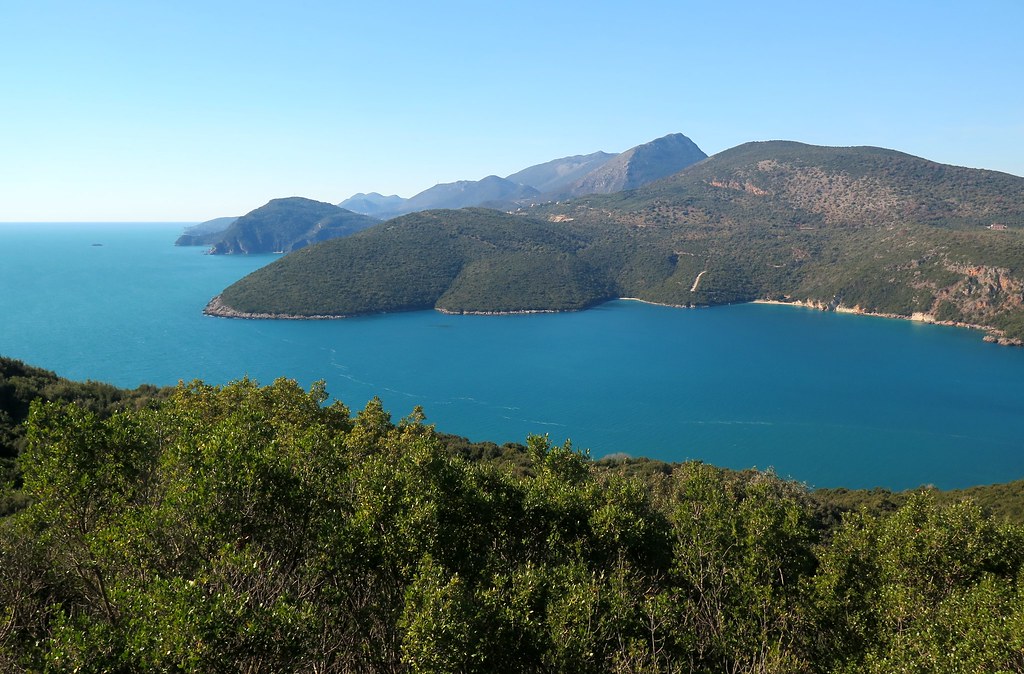 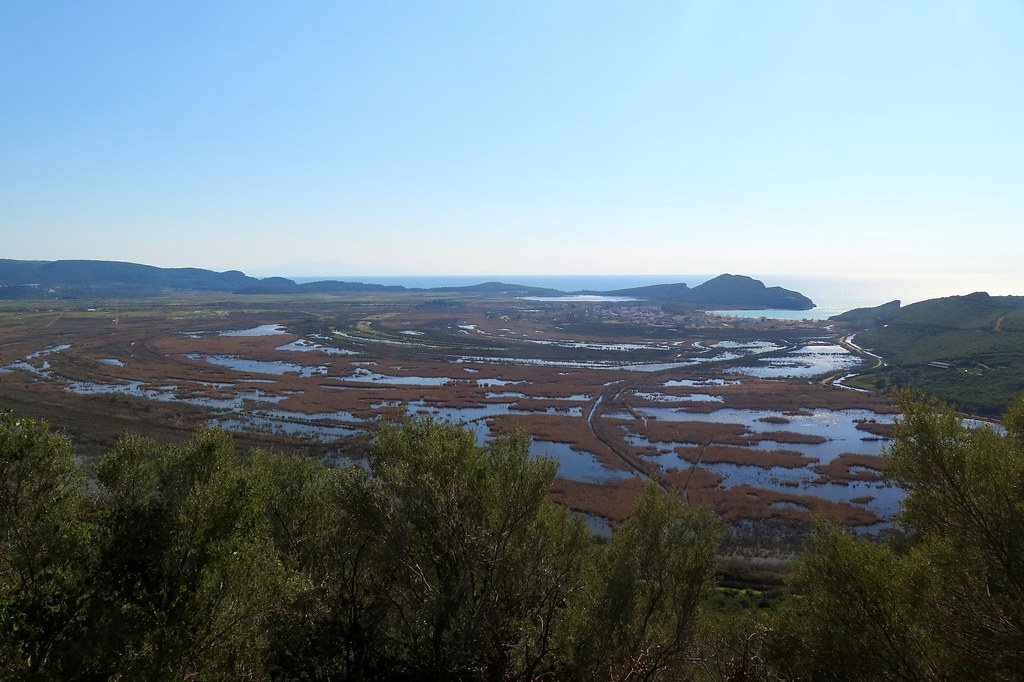 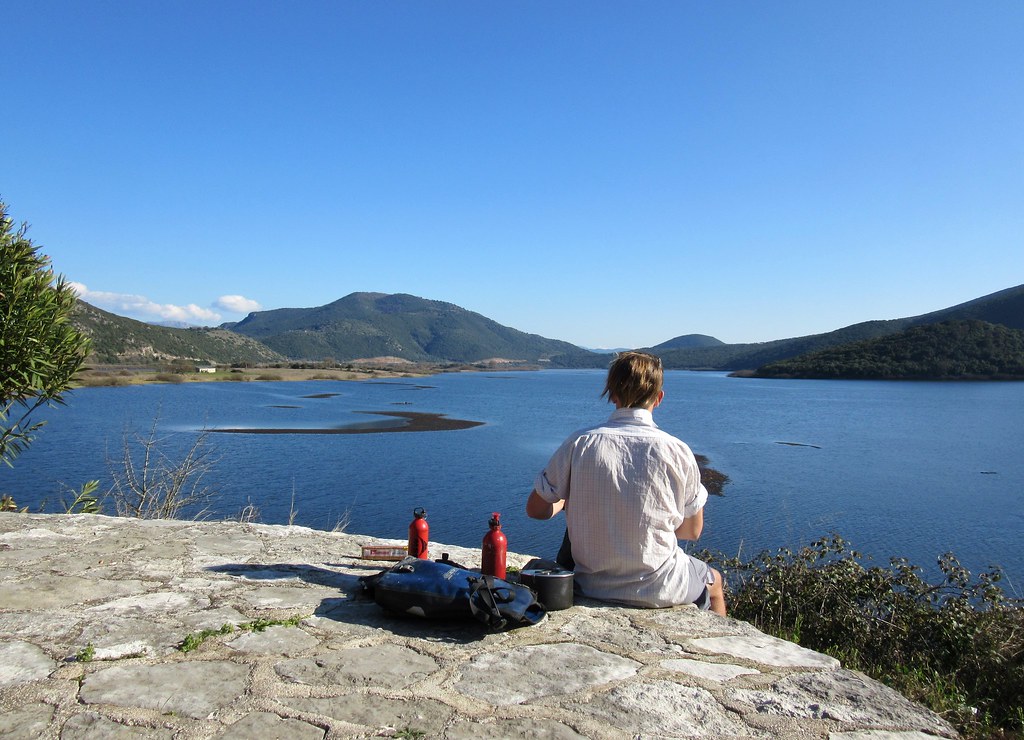 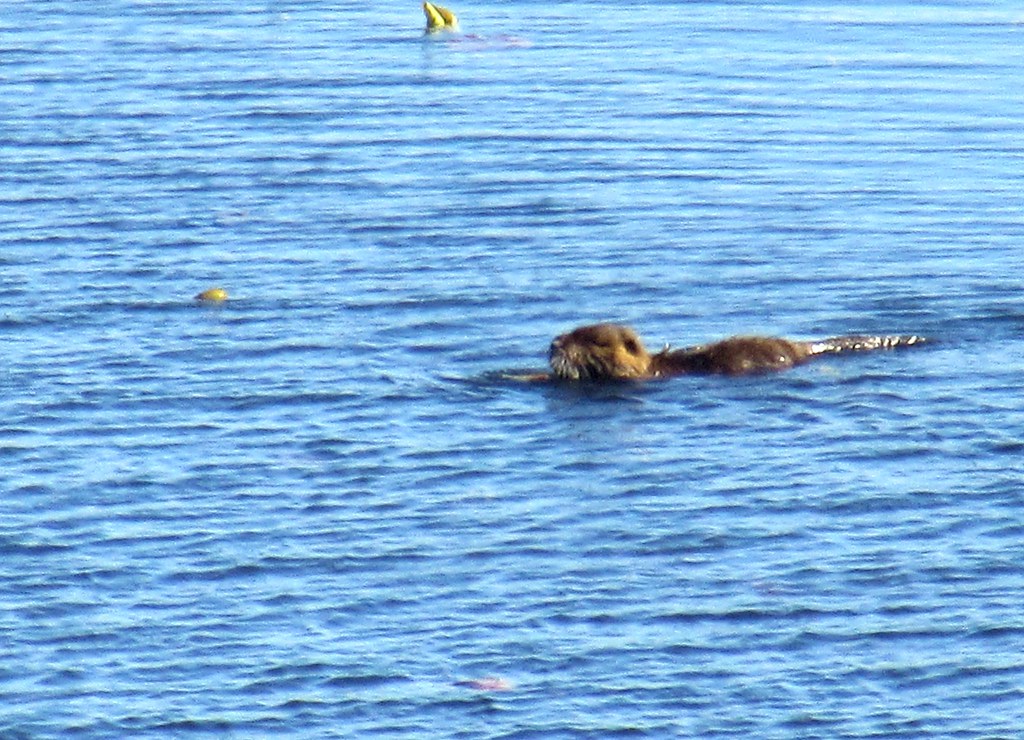 Our last full day in Greece was a good one – bright sunshine all day with temperatures way up in the 20s. We had a couple of hours riding inland before the road took us back to the coast, level with Corfu. We rolled down into Igoumenitsa which from afar just looked like a big industrial port but was really nice once we got into it. We took an afternoon break, sitting outside a cafe next to the harbour enjoying our final Greek coffee and baklava. Our time in Greece really is ending on a high. 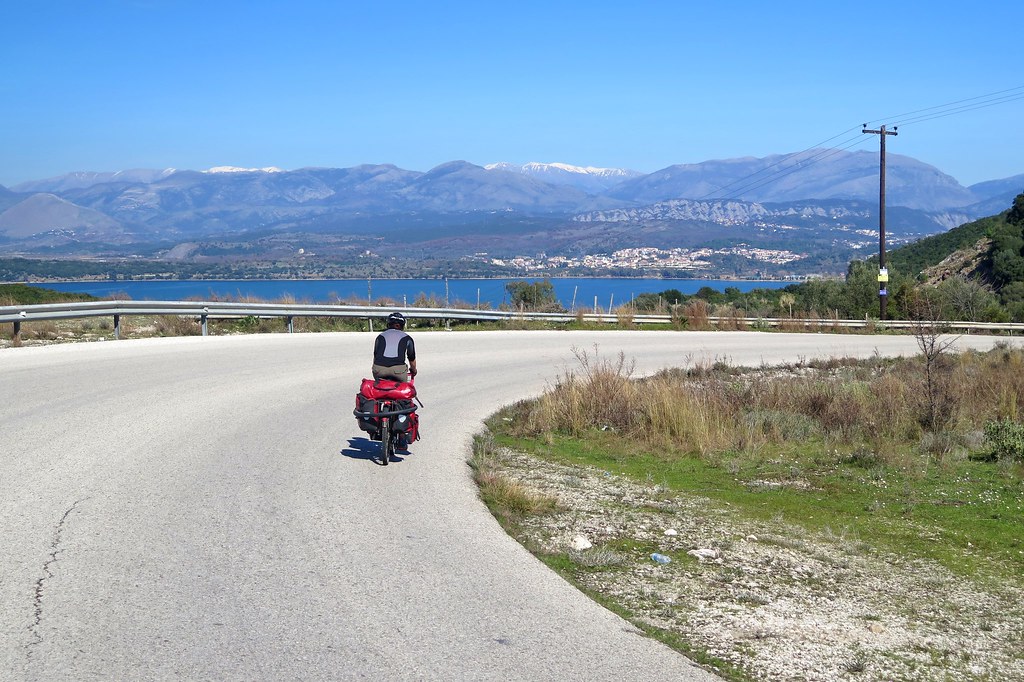 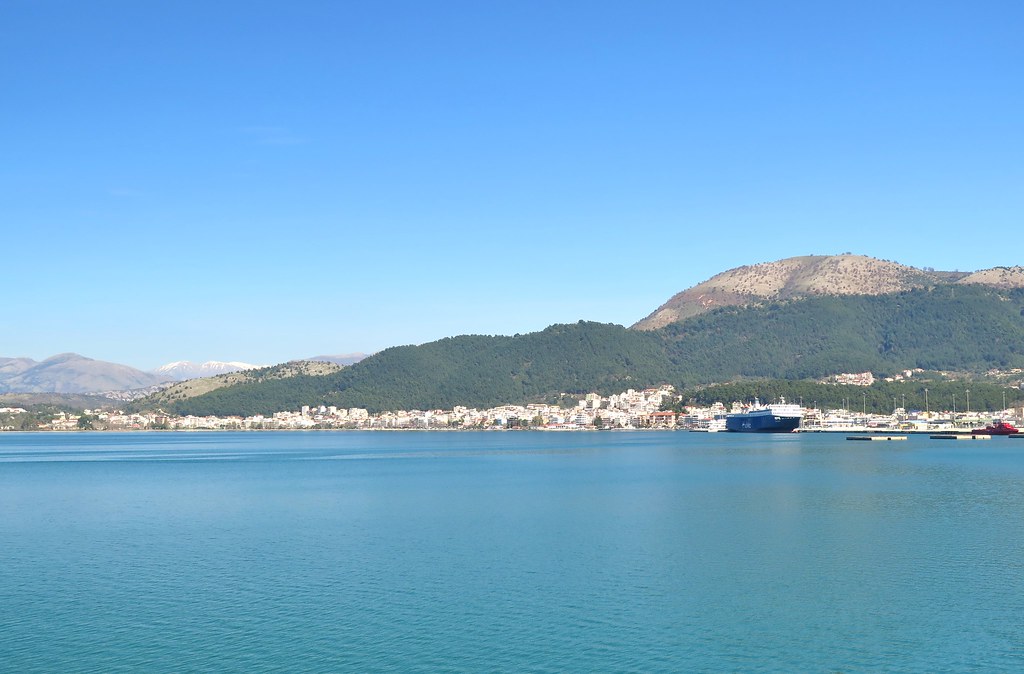 Our final campspot in Greece was probably the best yet. Another beach, next to the tiny fishing village of Sagiada. It was completely empty with a grassy area where we pitched our tent. We’d picked up a couple of beers when we passed a small shop, which we cracked open with our dinner, while we sat out watching the sun dip behind Corfu. We lit a fire which kept us warm until we retired to the tent well after dark. 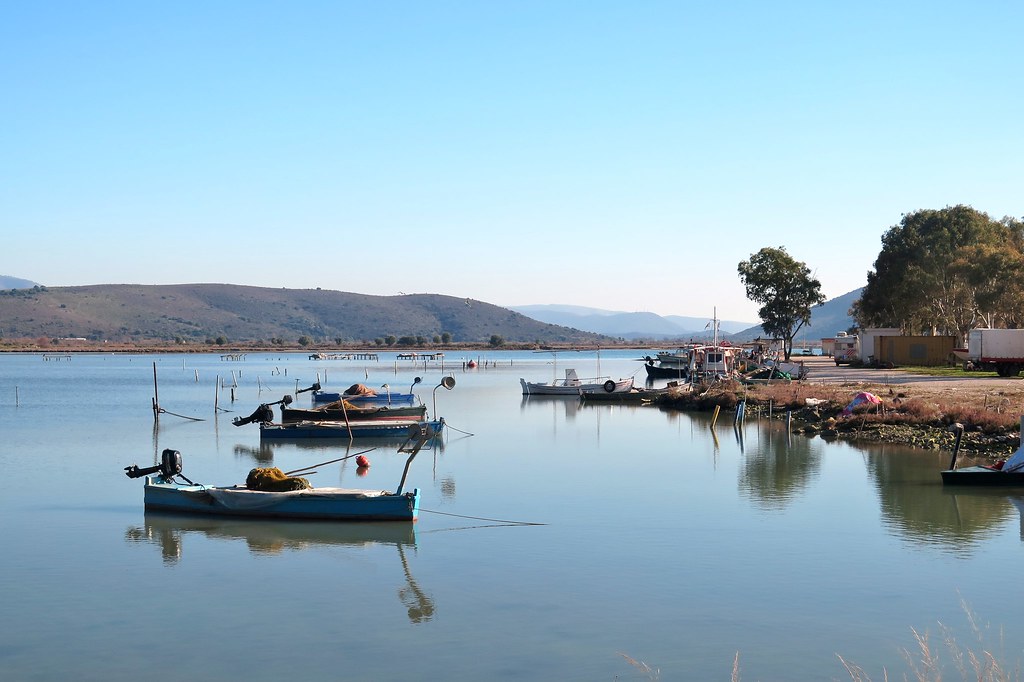 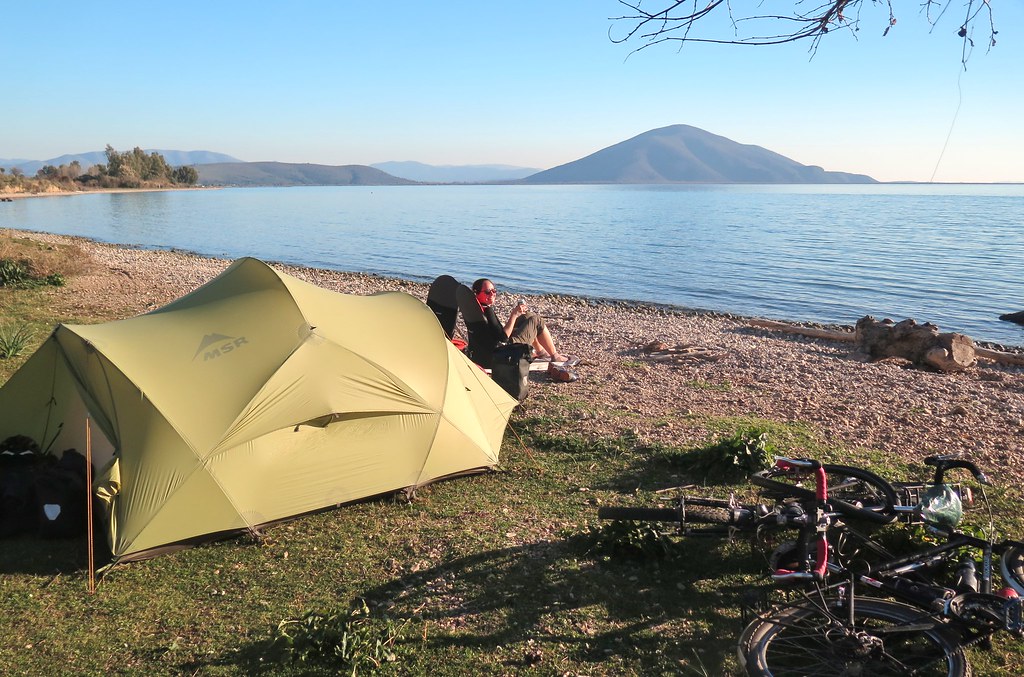 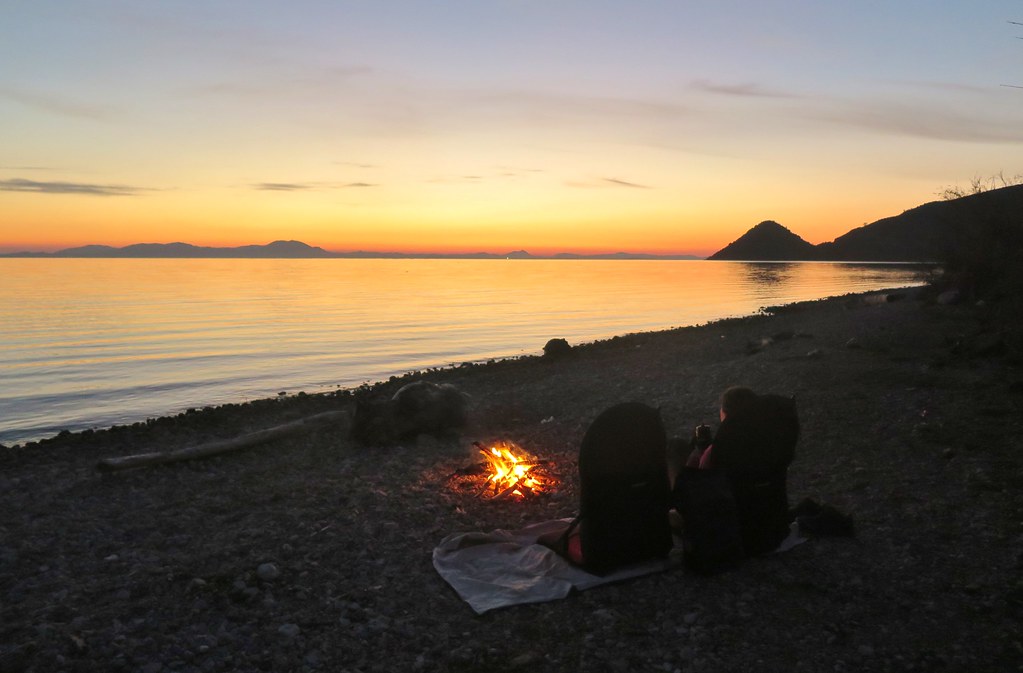 From the beach at Sagaida, we only had a few kilometres to the Albania border. The checkpoint is away from the coast up in the hills, so the road doubled back on itself and climbed, making it a hard start. We were passed by a van with UK plates which beeped us in encouragement. At the border we met the driver, an Albanian guy who has lived in Birmingham for 13 years. The border crossing was quick and easy, and another (maybe the last) stamp in our passports. Into Albania, country number 17! 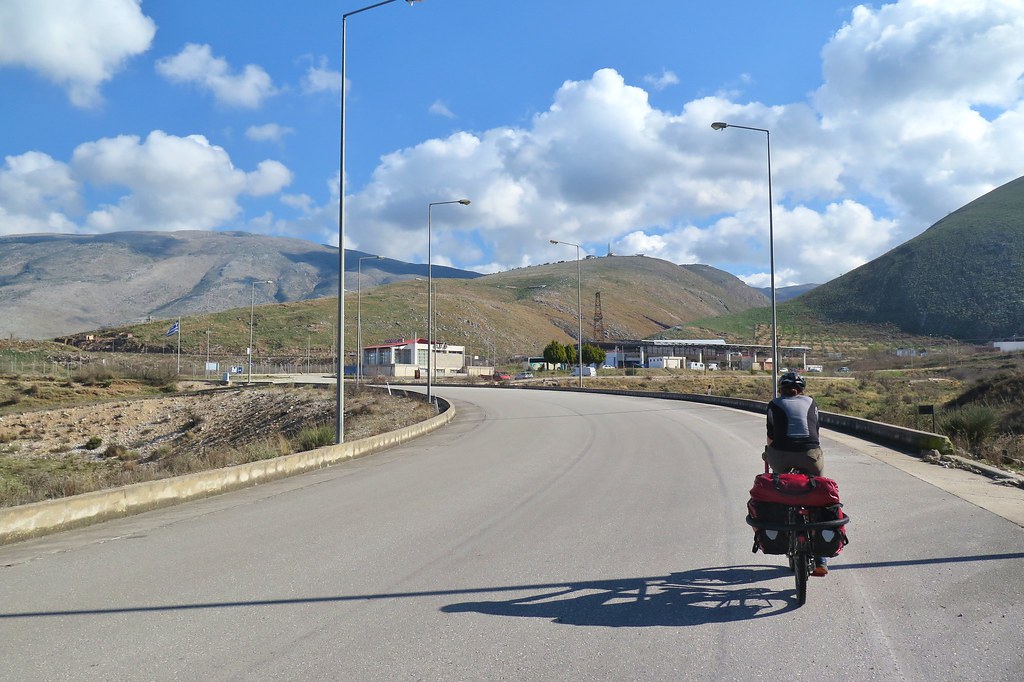 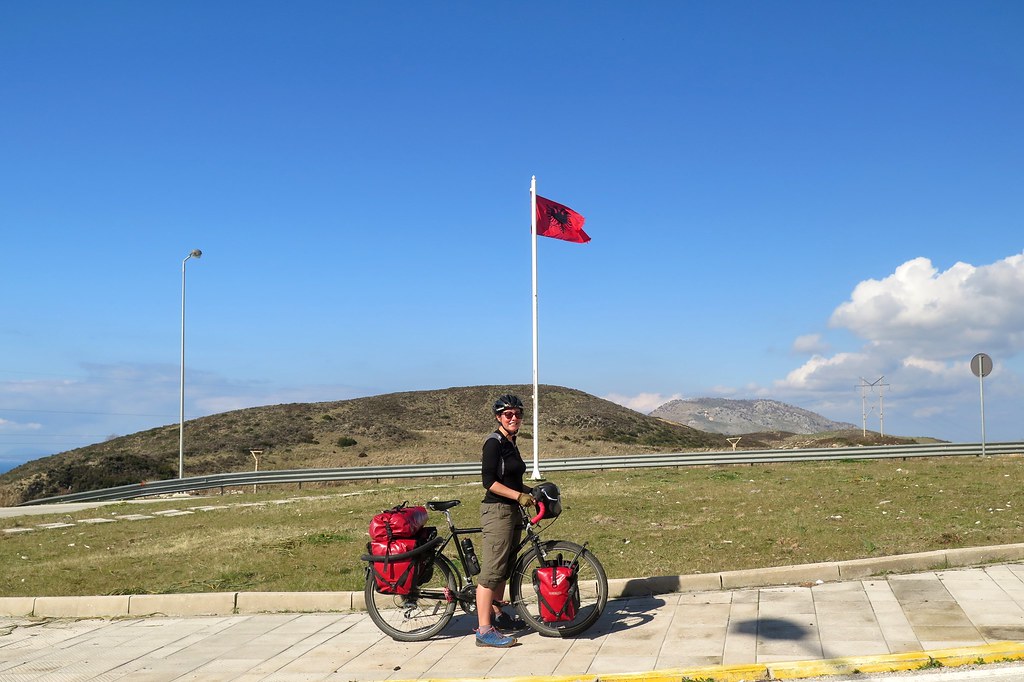 First impressions, excellent. A quiet road taking us back downhill through rolling hills, friendly people waving from farms and passing vehicles. We were having so much fun on the long downhill that we missed our turning towards Sarande and continued on the main road to Tirana. Luckily there was another option, but it took us along a bumpy dirt road to rejoin our intended route. Which turned out to be a bumpy dirt road, reminding us that we’re not quite in developed Europe just yet! 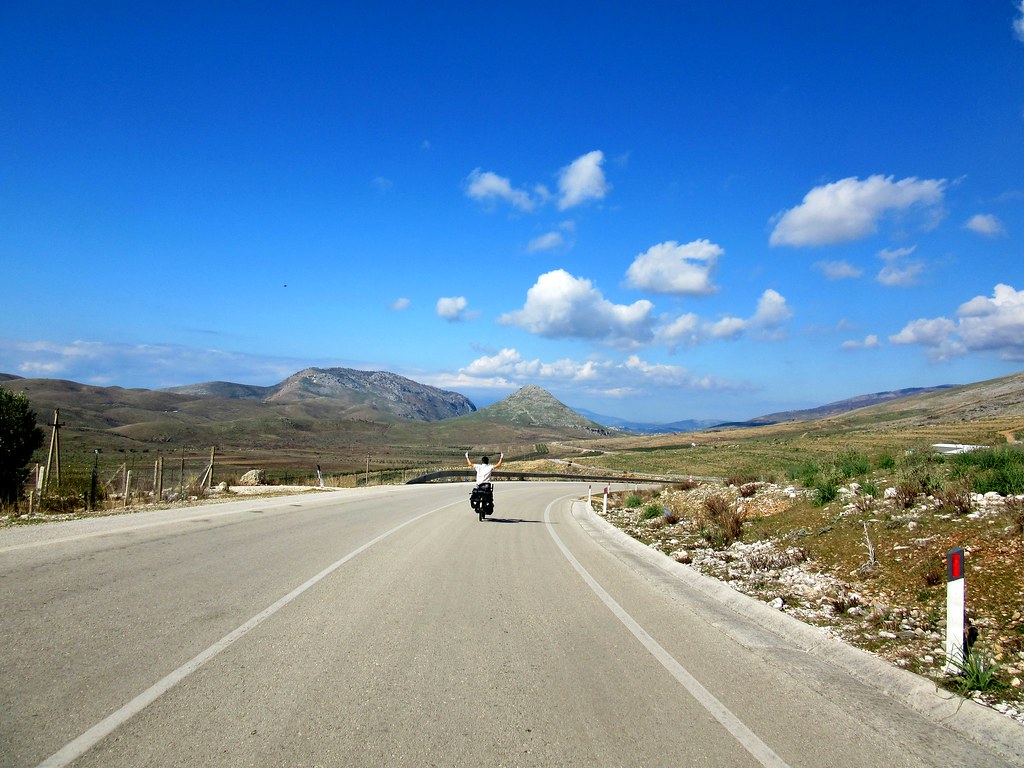 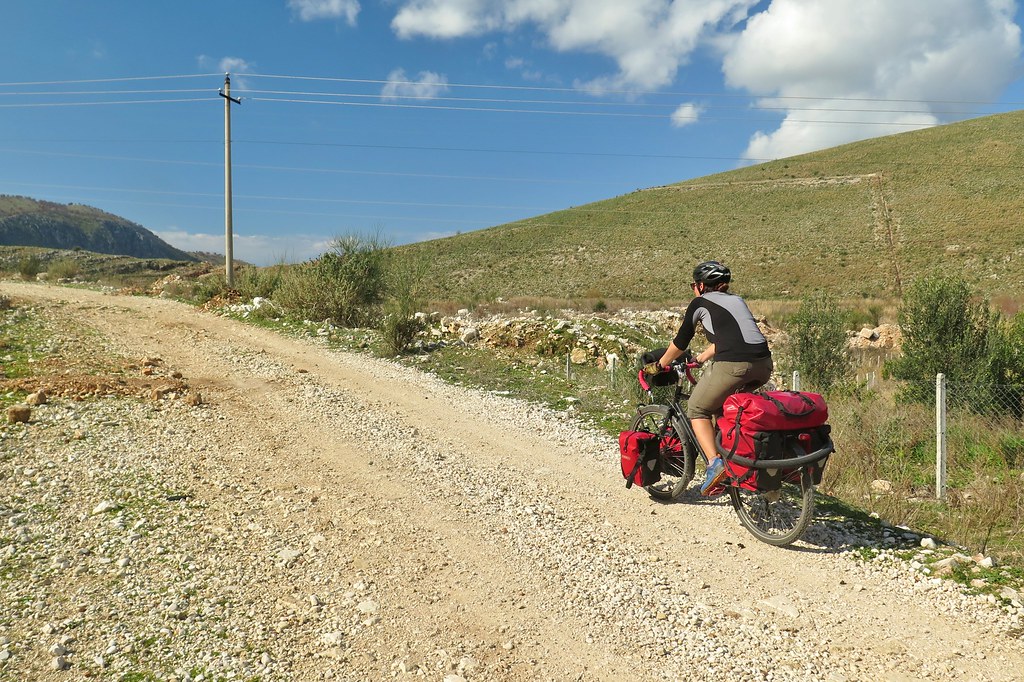 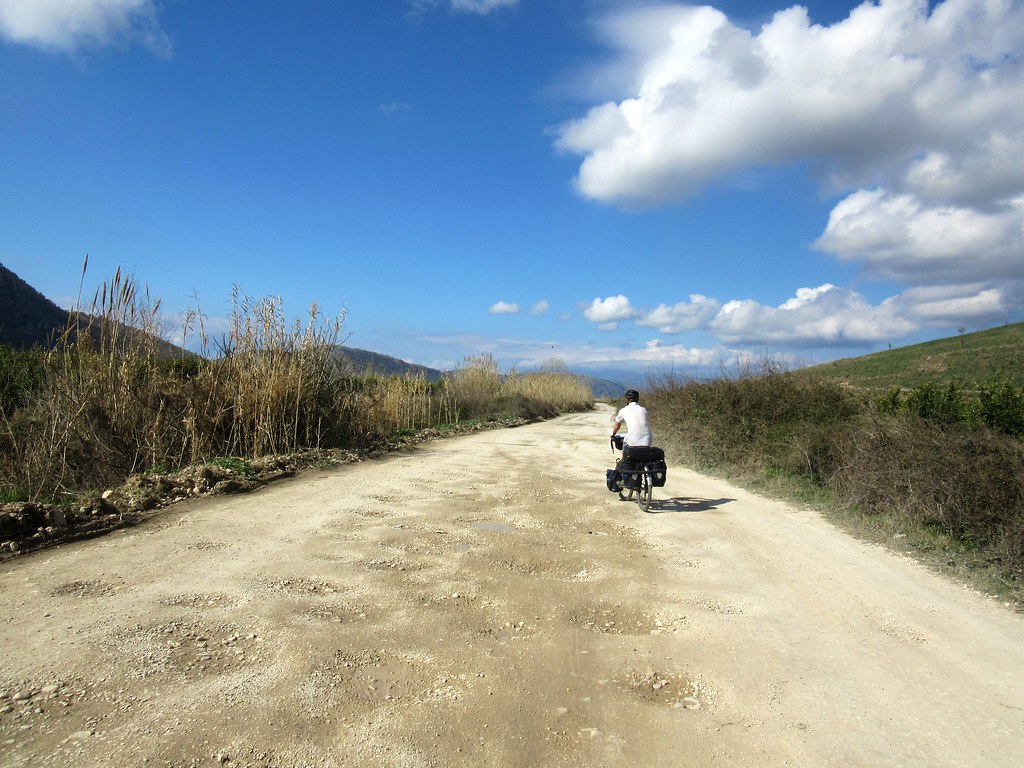 What the road lacked in smoothness it made up for in great views, and to be fair, we were back on a sealed surface before too long. We had a few climbs through the hills close to the coast, up and down between grazing goats and orange orchards. Our first real interaction with anyone was when a guy pulled over to pass a handful of tangerines through his car window. All good so far. 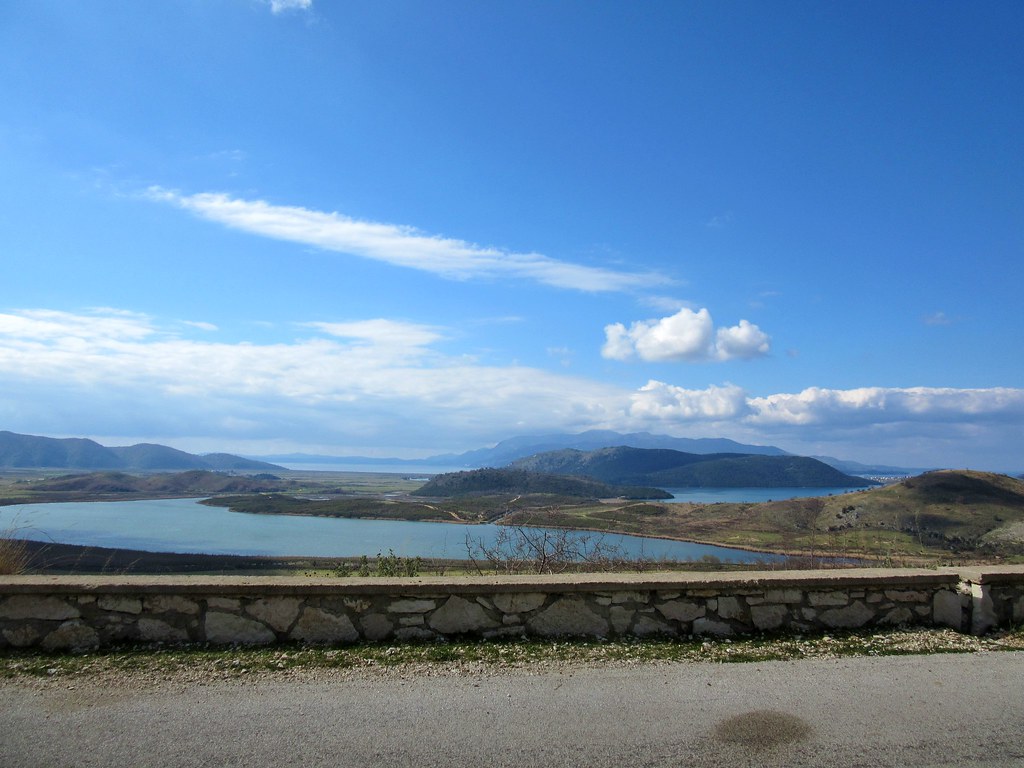 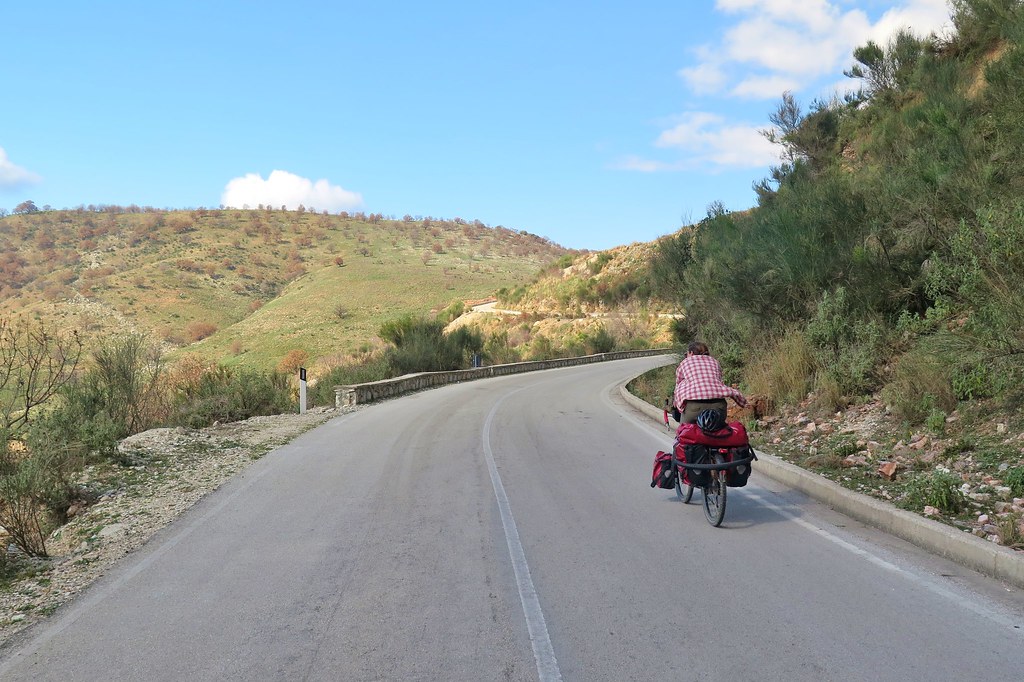 We had a long downhill and then a final flat stretch to get to Sarande. The road was blocked by a big black dog who looked fairly calm from afar, but when we passed him he started growling and then chased us. His mates got involved too, getting a bit close for comfort so we slowed and shouted back at them which got them to back off. Maybe we’ll need to start carrying dog rocks in our pockets again..? 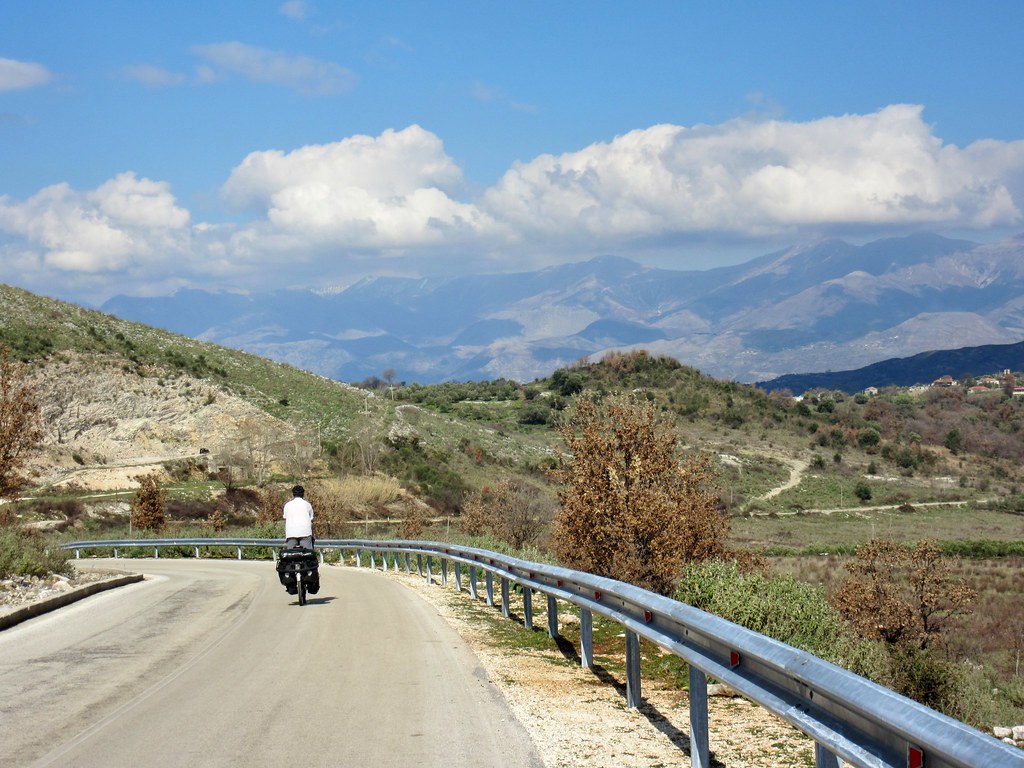 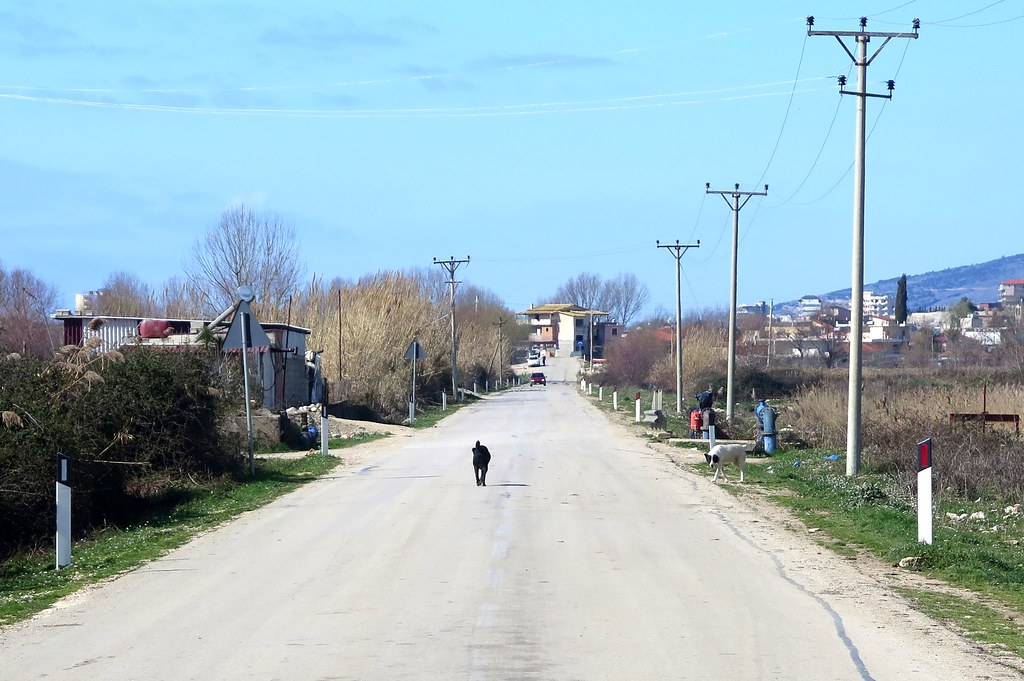 We rolled into Sarande, which felt quite like some of the ‘stans from the outskirts, but once we got closer to the centre it was much more cosmopolitan and we started passing new beach hotels and apartment blocks. The centre was very chaotic, and it took as a long while to find an ATM to get some local currency (Lek). It’s a nice beach town, a bit rough around the edges but looks interesting. We found a hotel for around 10 Euros then went down to the seafront for a ‘well earned beer!’ It’s been a good first day in the country. We won’t be here long, but we’re looking forward to seeing more. 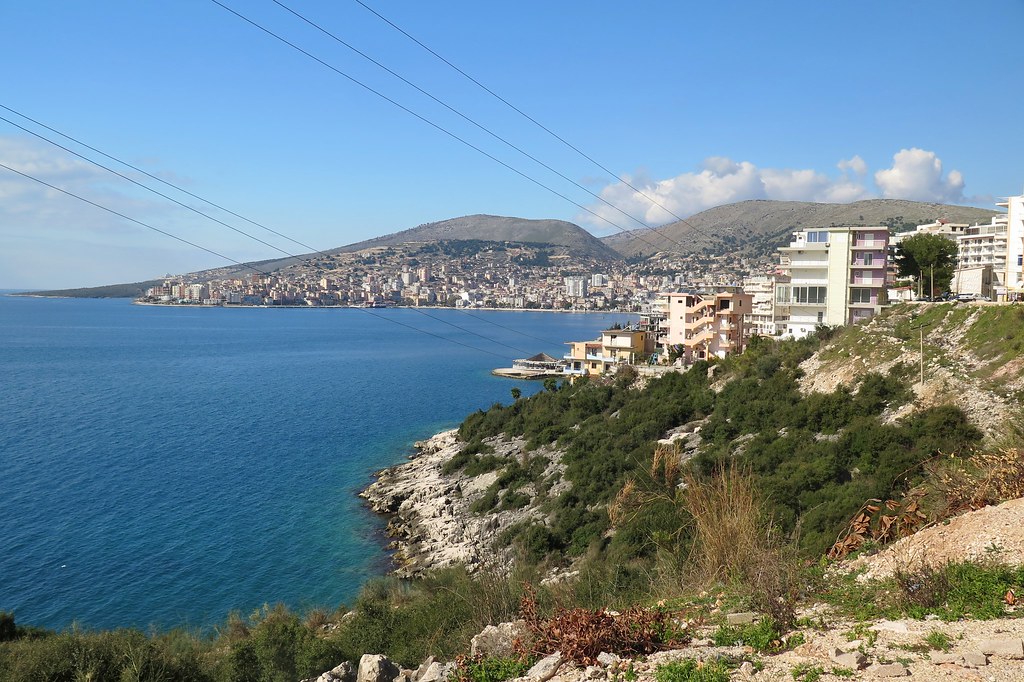 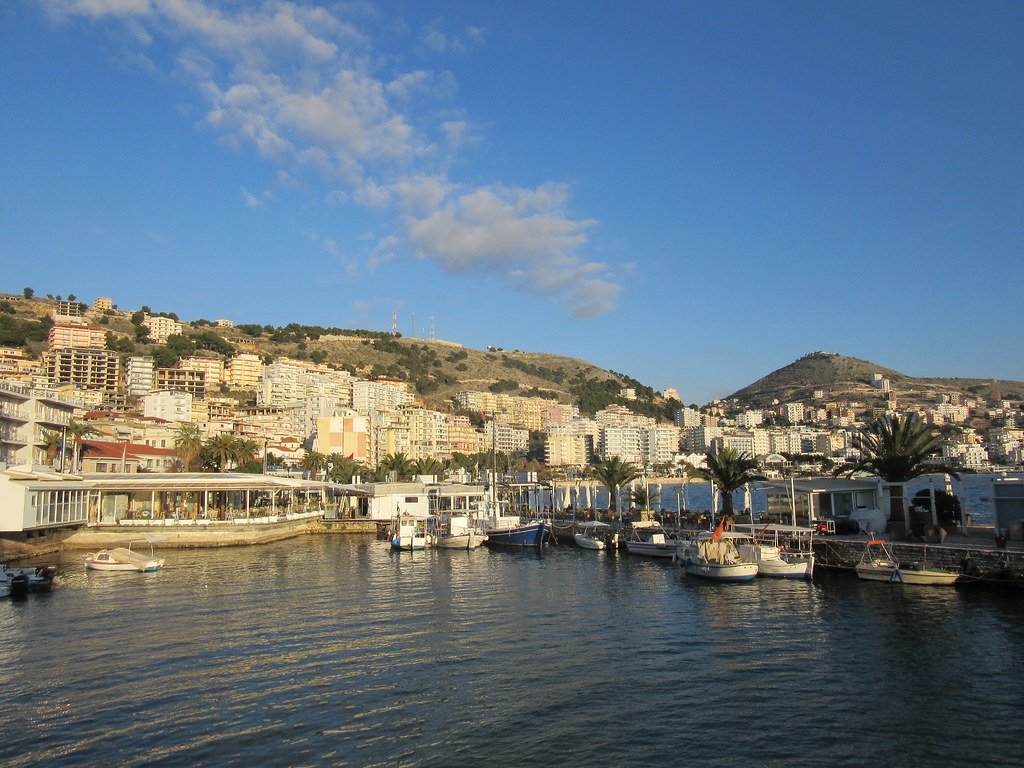 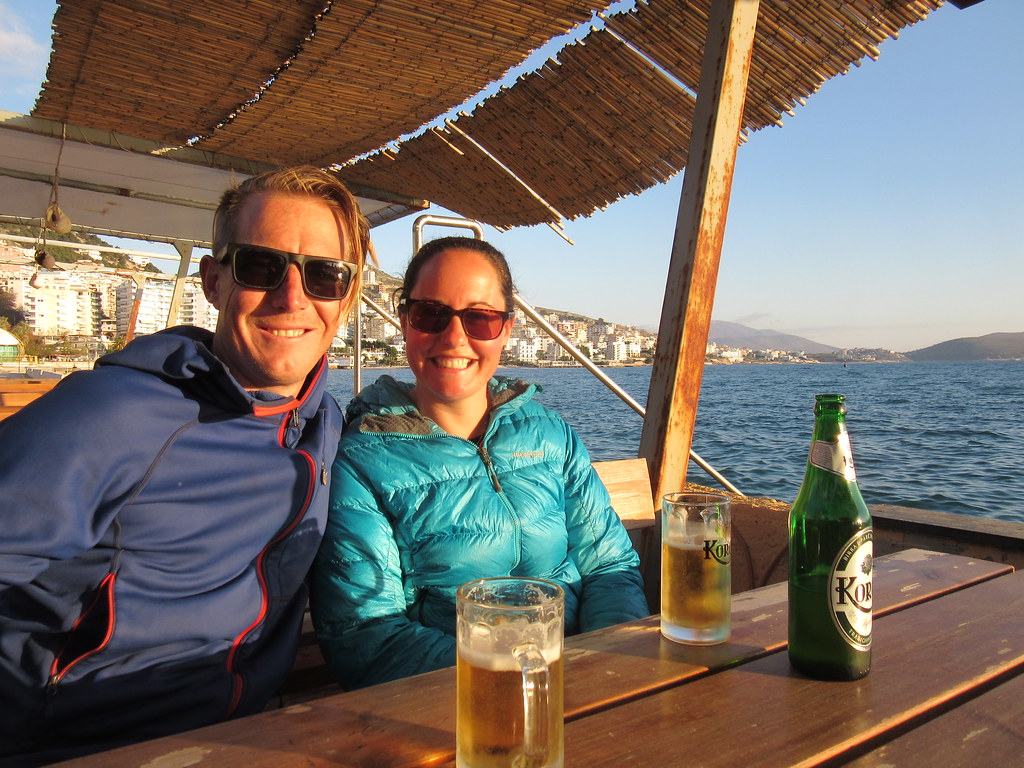 Here’s our route from Paleros to Sarande: 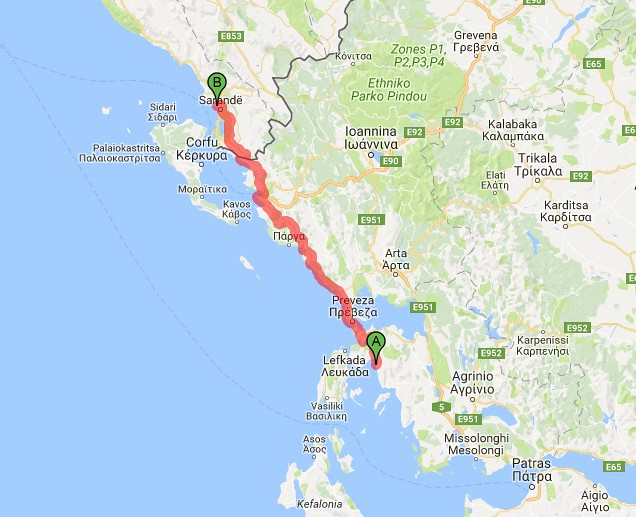