When we arrived in Luang Prabang, we didn’t have a definite idea how long we’d stay. From everything we’d heard, the place is hard to leave, and this turned out to be true for us! I think it became a running joke with the people in our guesthouse when we asked them, yet again, if our room was available for just one more night. Although we didn’t actually do all that much there, we thoroughly enjoyed our time in Luang Prabang. It sits at the meeting point of two rivers (Mekong and Nam Khan), with the water almost completely encircling the old town centre which is full of temples, tree lined alleyways and colonial architecture. I’d love to say we were more cultured and toured around the temples, learning all about the historical significance of the nation’s old capital but, I can’t. We did see a lot of the town though, the night market, the leafy walkways next to the rivers and lots of the restaurants. It was just a very easy place to spend time. 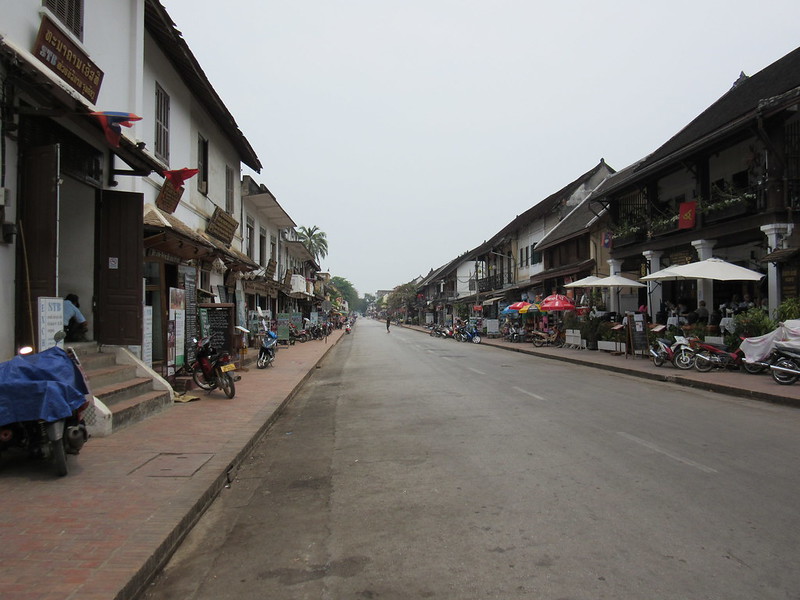 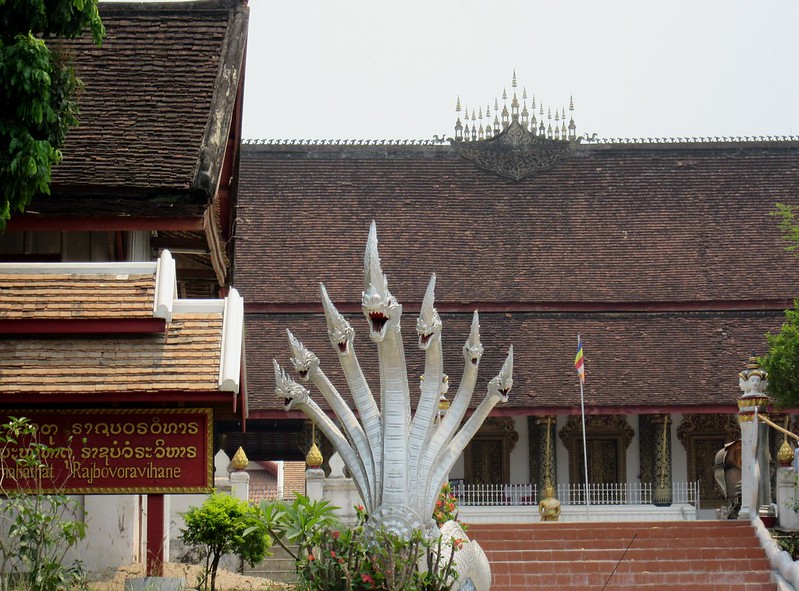 Of course, it was a great place to be for Foreign Food Friday, we were spoilt for choice. Pizza was unanimously chosen this week, in an excellent, but empty, Italian restaurant tucked down a side street off the main drag. There were countless other options, and numerous cafes and bakeries that tempted us, all part of the charm that kept us in town so long. We also managed to meet up with Koen and his family a couple of times as they were staying right opposite us. One evening by chance, we were both drinking beer outside our guesthouses, so they invited us over. We were out on their terrace, joined by a Korean traveller, until about midnight when our place was being locked up, so we thought we should call it a night. 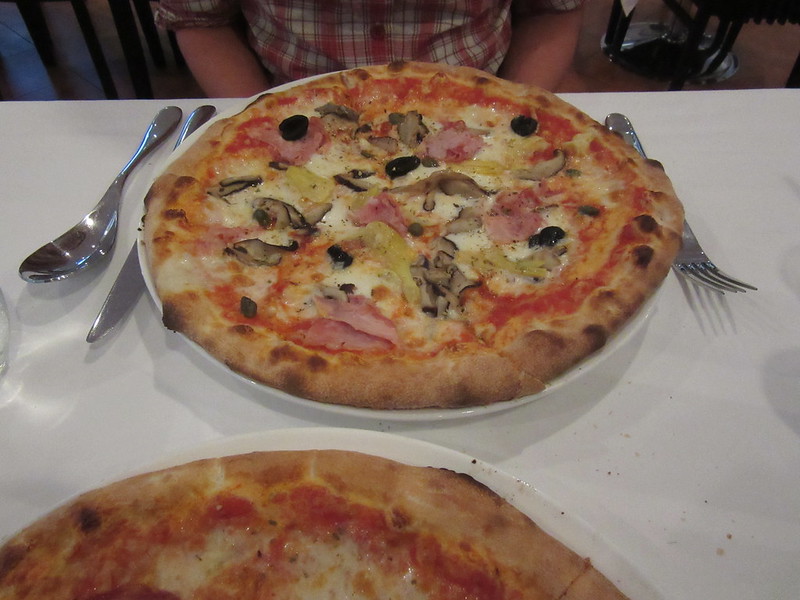 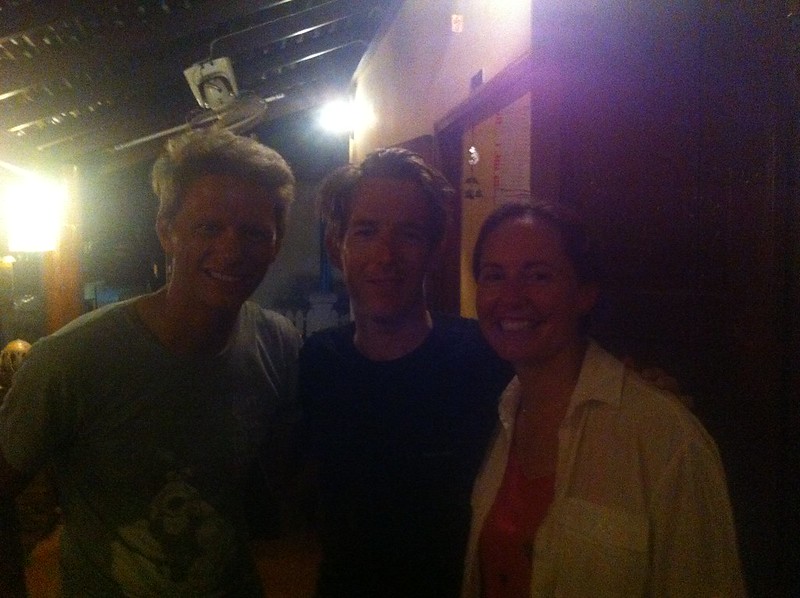 It wasn’t all lazing around eating and drinking beer though, we were semi-active on one day. We cycled down to Kuang Si waterfall, about 30km west of Luang Prabang. This is on all the tour itineraries and looked like a must see. Being on our bikes, we were able to get down there early before most of the tuk tuks arrived, meaning we had the waterfalls almost to ourselves for a couple of hours in the morning. There are 6 or 7 terraced pools, underneath a tall waterfall from the cliffs above. The water cascading over the rocks is a vivid blue colour, especially in contrast to the surrounding green jungle. After 30km riding fast on our unloaded bikes, jumping into the cold water and sitting under the waterfalls felt amazing. We then hiked up to the top of the main waterfall and looped back down to the base area for a great lunch. 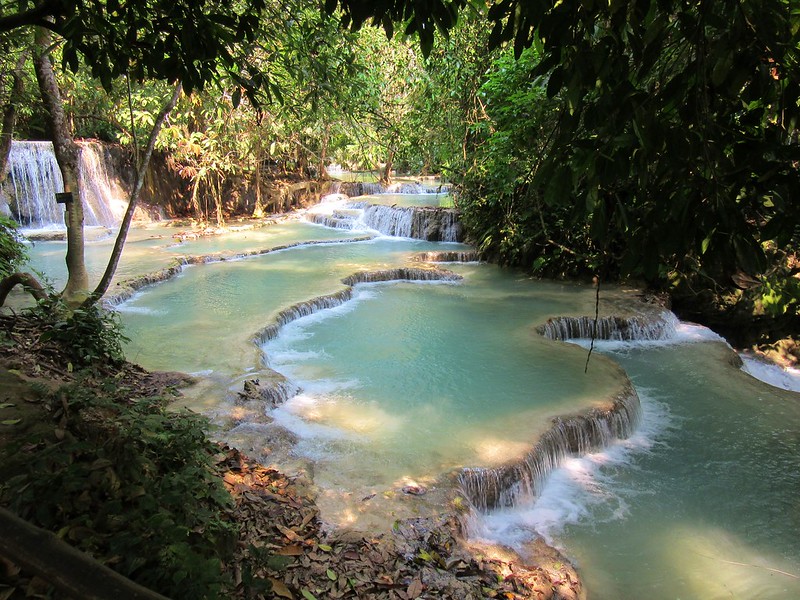 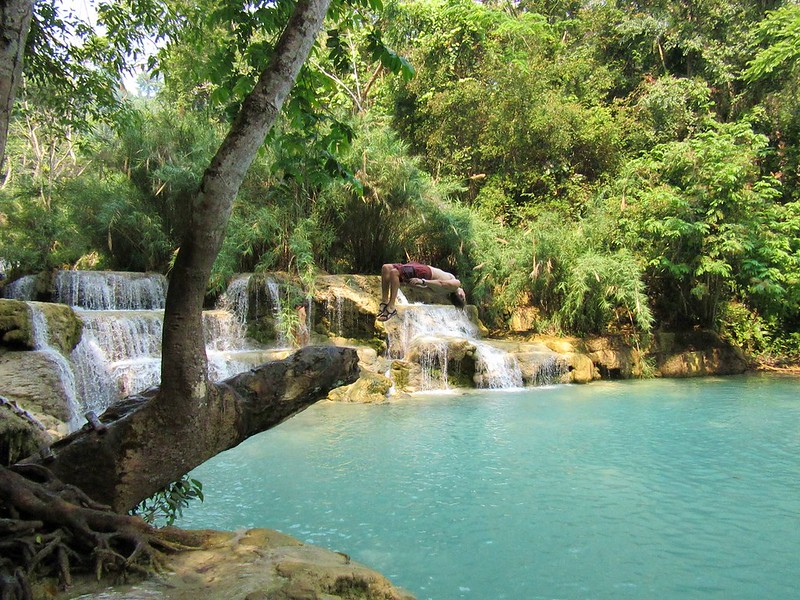 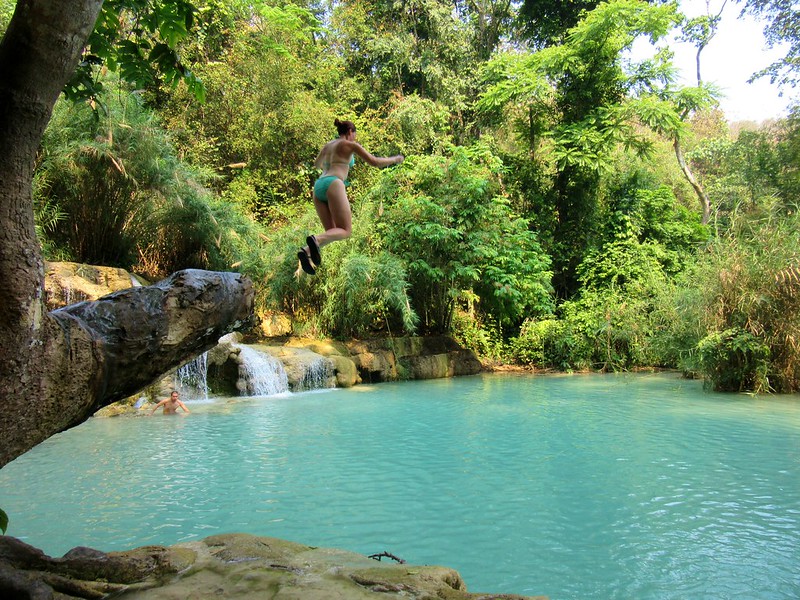 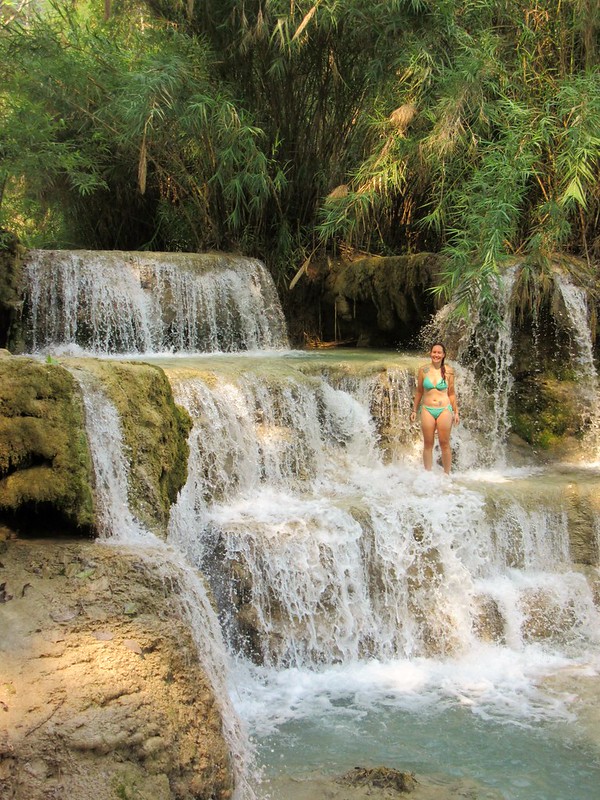 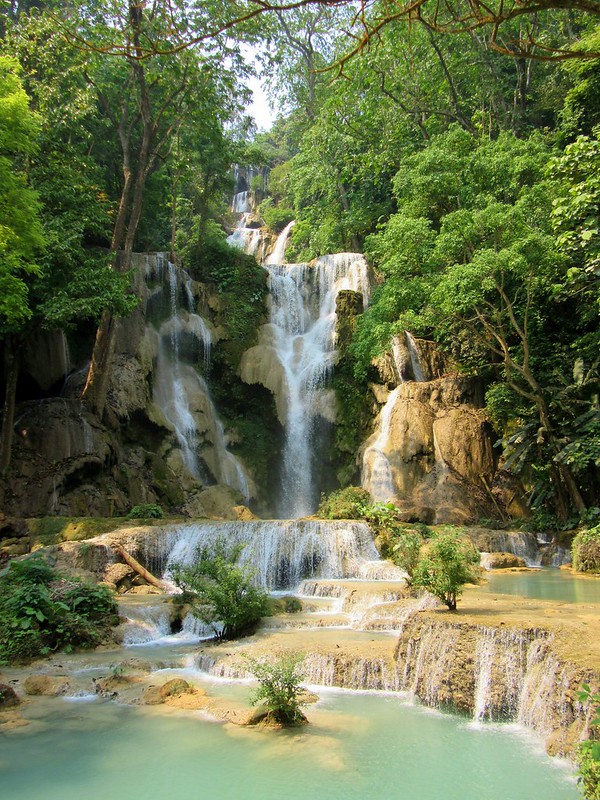 After 5 nights, we reluctantly packed up and got back on Route 13 to head out of town. The next way point was Pakmong, around 115km north. We could’ve done it in one day if we were 100% but we were both feeling a bit under the weather. So we planned to split the ride over two days. Heading out of Luang Prabang, we joined the morning rush hour crossing a rickety wooden bridge with all the other scooters. The air was thick and smoky so even though the sun was out above us, the surrounding mountains were almost all hidden in the murk. We rode past the airport and along next to the Mekong. The road was to follow the Mekong, then the Nam Ou river almost all the way to Pakmong, meaning we didn’t have any big passes to climb, but we still had our fair share of ups and downs. We weren’t sure what accommodation lay ahead and our legs weren’t feeling that strong, so when we saw a sign for a guesthouse after 30km we decided to just call it a short day instead of taking a chance and pushing on. We’d make up the distance the next day. It was a very basic place in a tiny village on the river. We’d finished early, so went and sat on the riverbank for a while until it was a reasonable time to have lunch. We ate in a restaurant next to a bridge on the main road. We were there for some time, and thought we might see other touring cyclists passing. We’d heard so much about how popular Laos is with cyclists, and seen in other journals that meeting other tourers is a daily occurrence. But so far, for us, we’ve only seen one, Koen. Maybe we’re not travelling in the peak season. Or, we suspect, the new hot destination is Myanmar, so everyone is over there instead. 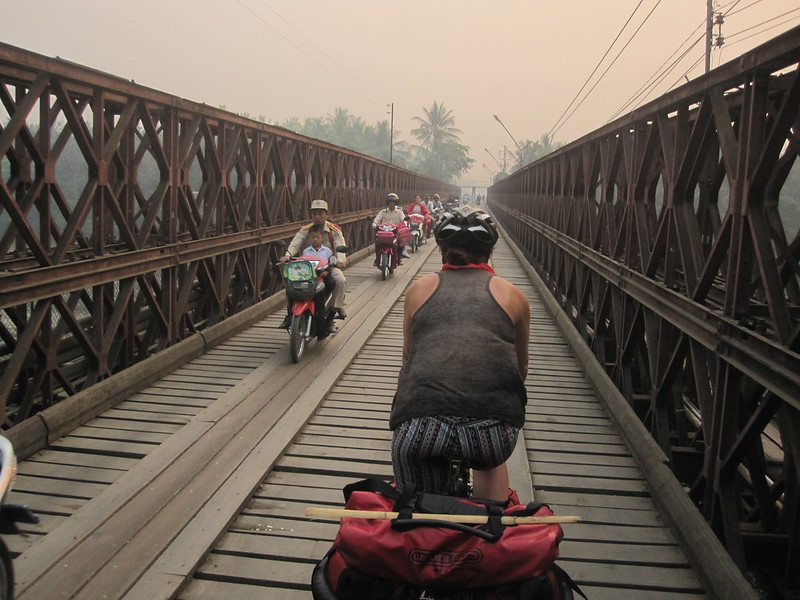 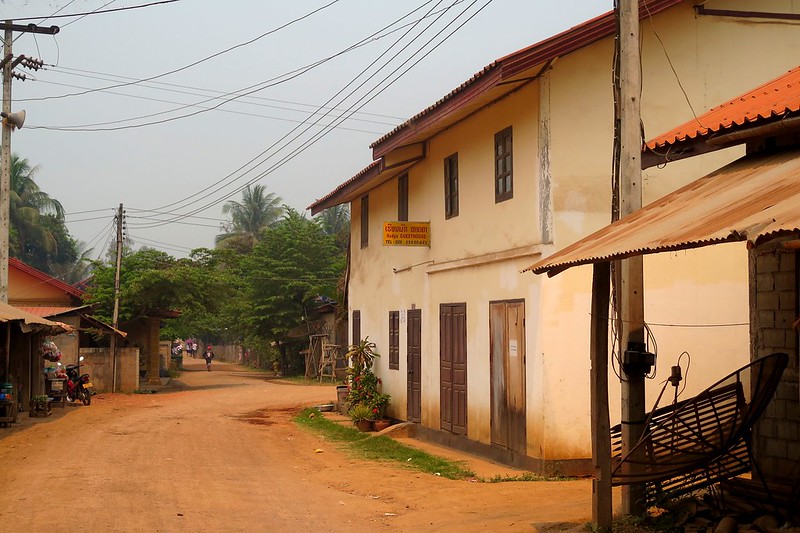 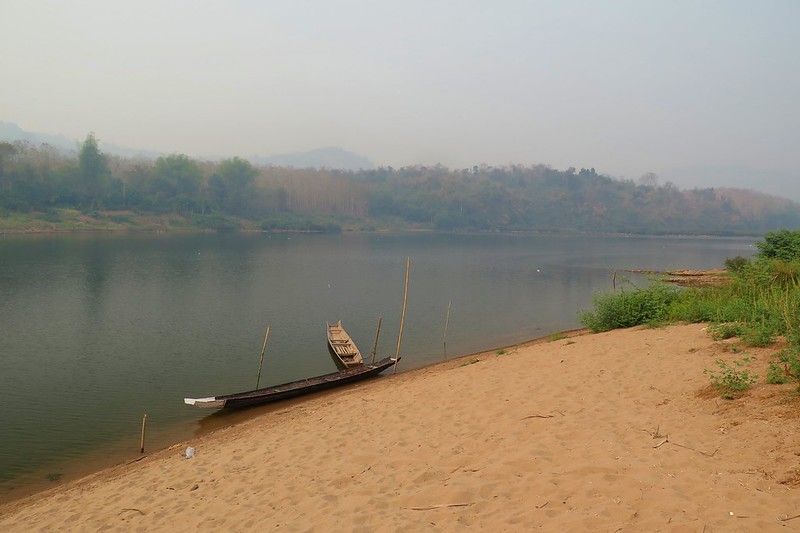 During the night in our room, we heard what sounded like rain hitting the roof and windows. It was really pounding down and the electricity cut out. We went to have a look outside, slightly worried that the dirt road through the village would be flooding, but realised it was a big dust storm. The wind was howling, whipping up the dust and sand, blowing it against the buildings. The next morning though, I think the wind must’ve helped to clear a lot of the smoke and fog from the previous day. We cycled along next to the river as the sun rose with blue skies above us and better visibility than we’ve seen for a couple of weeks. The river ran between tall peaks which, for a change, we could see quite clearly. The views were really good, but the cycling was still quite tough going for us. At one point as we were slowly riding uphill, Clare stopped dead pointing to the side of the road next to us. I’d heard a rustling in the gutter and she pointed out a long black snake climbing up a branch away from us. It was well over a metre long, maybe more. We often sit next to the road, legs dangling over gutters filled with old leaves. We’ll probably check them a bit more closely before stopping in future! 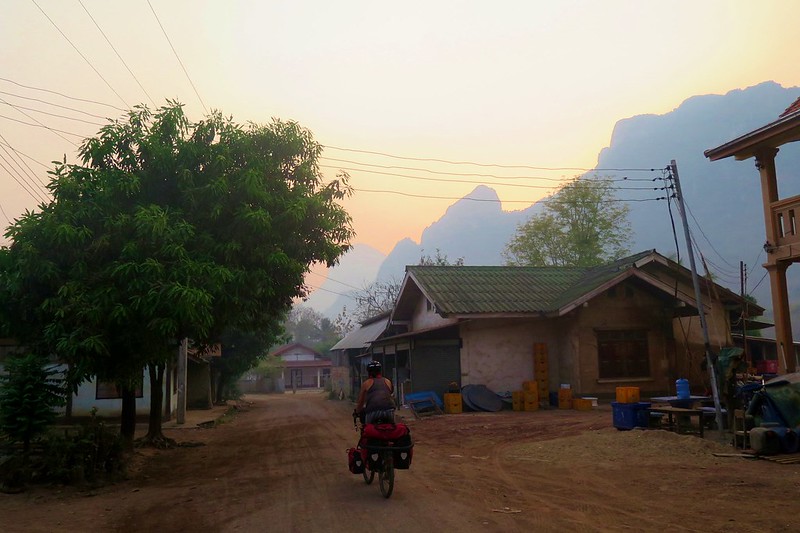 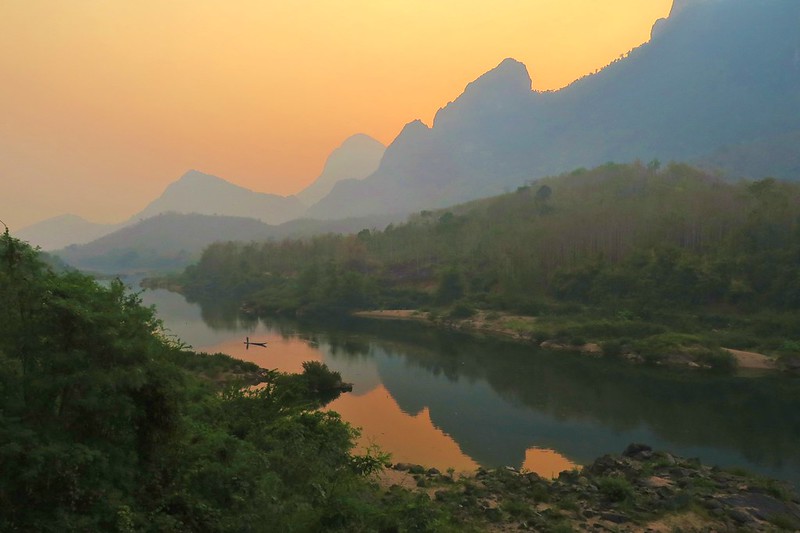 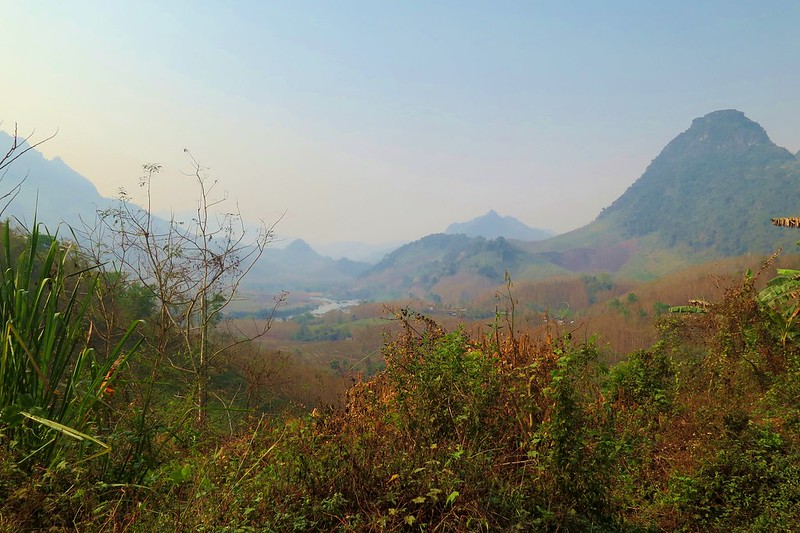 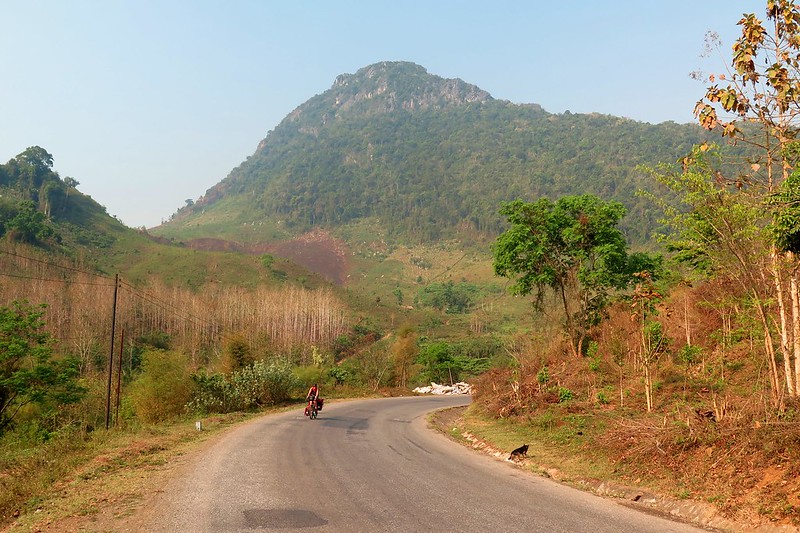 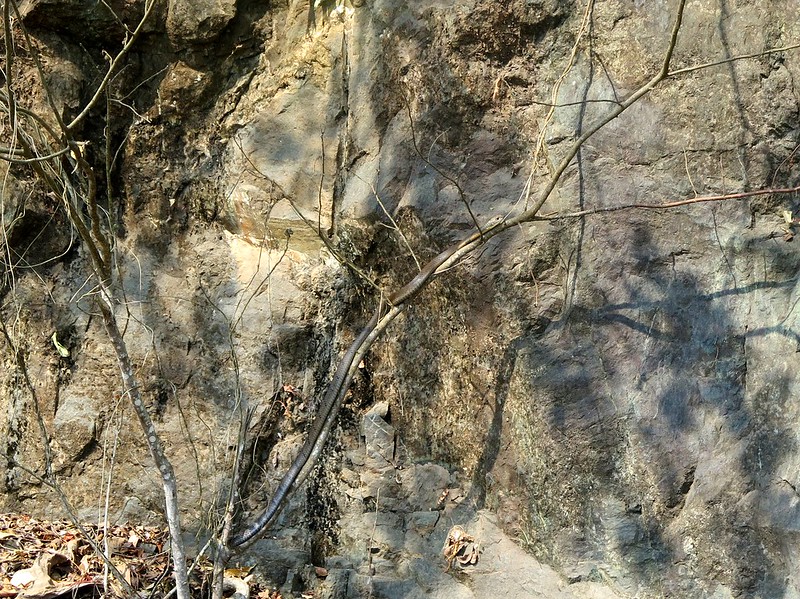 Mid morning and after about 50km, a motorbike pulled alongside us and the rider waved at us. We waved back, cos that’s what you do, but didn’t recognise the guy until he pulled over ahead. We stopped and realised it was Koen’s Dad, Peter. Chatting beside the road, we attracted the attention of some local kids who wanted high fives and handshakes. They were nice, but I think one of them pinched my dog stick off my rear rack. No big deal, it was a bit too long anyway, I was looking for another one, so the joke’s on them. They posed for a photo with Peter before he zoomed off ahead of us. We won’t see Koen or his parents again now, they’re splitting off to head east by boat towards Vietnam. 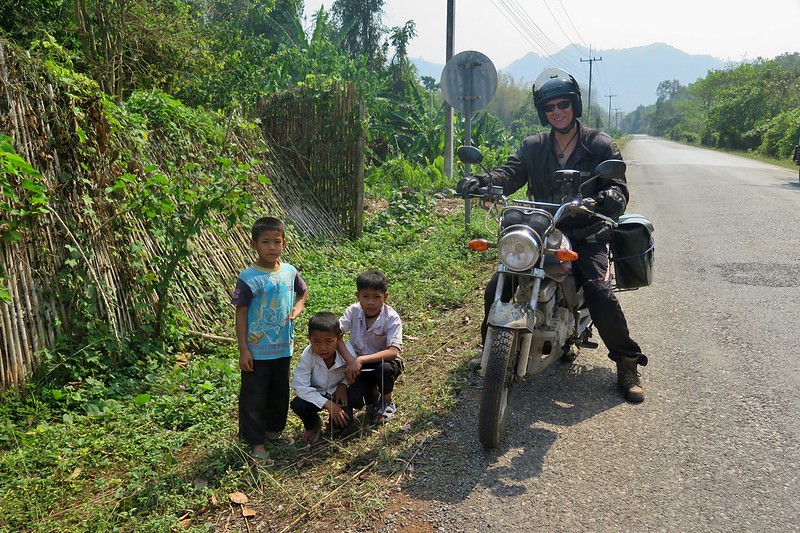 The late morning was very warm, the sun was high and the sky very clear, pushing the temperature into the high 30s. We stopped for a much needed cold drink in the town before Pakmong. There were a load of different guesthouses which looked really nice and very tempting. But we wanted to continue, so as not too make the following day too long. Just after 12 we got into Pakmong, to find a load of restaurants, this is a stopping point for the buses from China, but just the one guesthouse. It was fine though, no wifi, and the owner didn’t have a key to our room, but good for a quick nightstop. The sunset view from our room was a good one, looking west over the mountains that we’d tackle the following day. 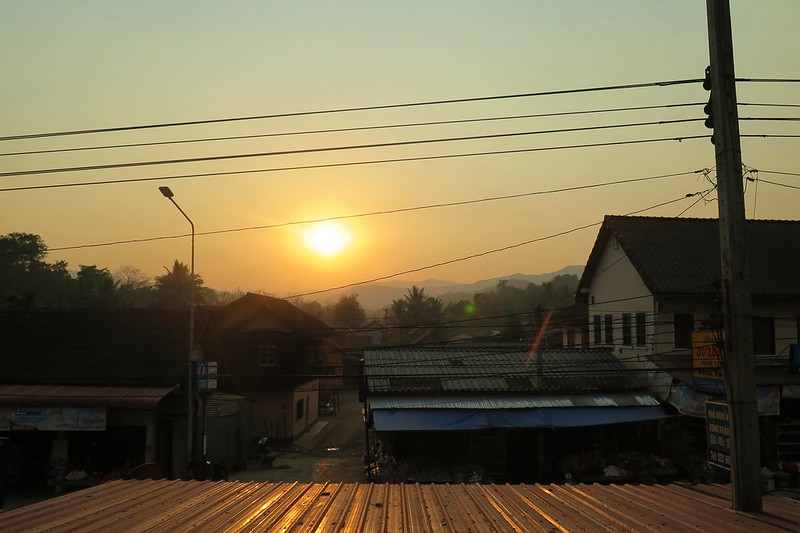 The 80km from Pakmong to Oudomxay is reputed to be very tough. Not only for the two big climbs, but also the terrible road surface. Other cyclists have reported landslides, potholes and long stretches of gravel. But, fortunately for us, I must’ve been reading slightly older blogs. Thanks (I imagine) to the Chinese, the road is now perfectly smooth the whole way. They haven’t given it the full China treatment and tunnelled through the mountains though, so we still had the two climbs to contend with. We were feeling a lot better in the morning after a good night’s sleep, waking at 5:30 and hitting the road by 6:15. The first 10km was a nice warmup, mellow rolling terrain before we started up the first pass. Then it was a tough 20km of consistent climbing, hard work even on a smooth road. The haze was back too, worse than ever, totally obscuring the surrounding mountains. Every time we rounded a corner hoping we’d see the road ahead starting to descend, we’d see another higher ridge and the climb continuing into up the murk. Eventually, after more false summits than I can remember, we found ourselves coasting back downhill. A nice long ride down into the next valley and the halfway point, where we stopped for a cold drink. 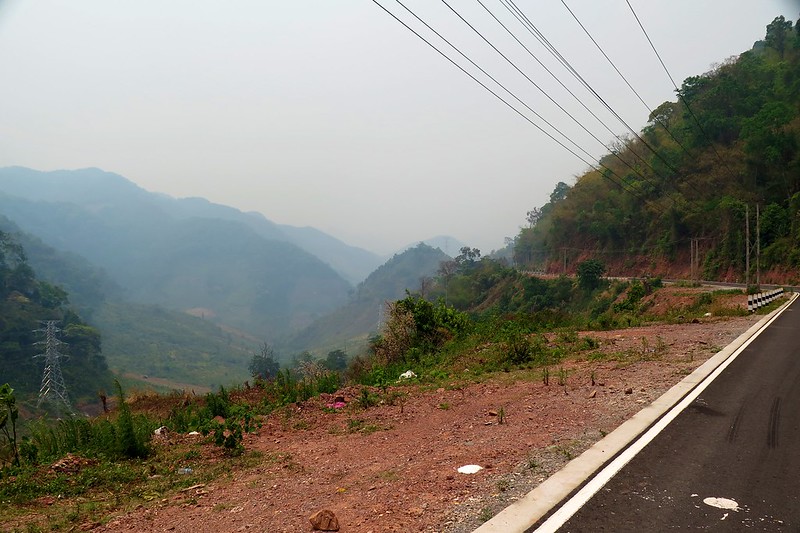 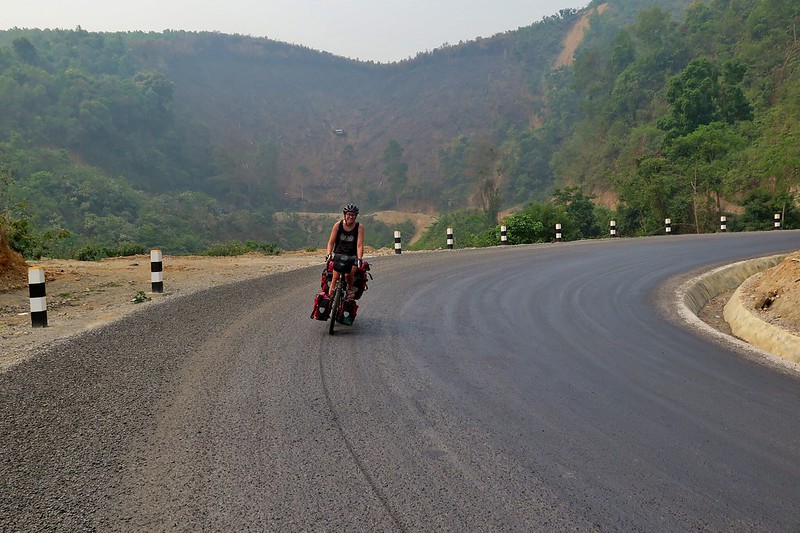 The second climb wasn’t as long as the first, 8km, but took us up to a similar altitude, about 1,300 metres. We found this one very hard, I think it’s the most climbing we’ve done in one day for a while. We took quite a few breaks and rode slowly in between, working our way upwards. At the top, we rode through a couple of mountain villages, perched high up in the clouds. Finally, the downhill arrived, and it was another fun one. They all are, but the road surface was so smooth we were able to really let the bikes go, picking up speed and throwing them over into the corners. After a tough day, this was a nice reward. 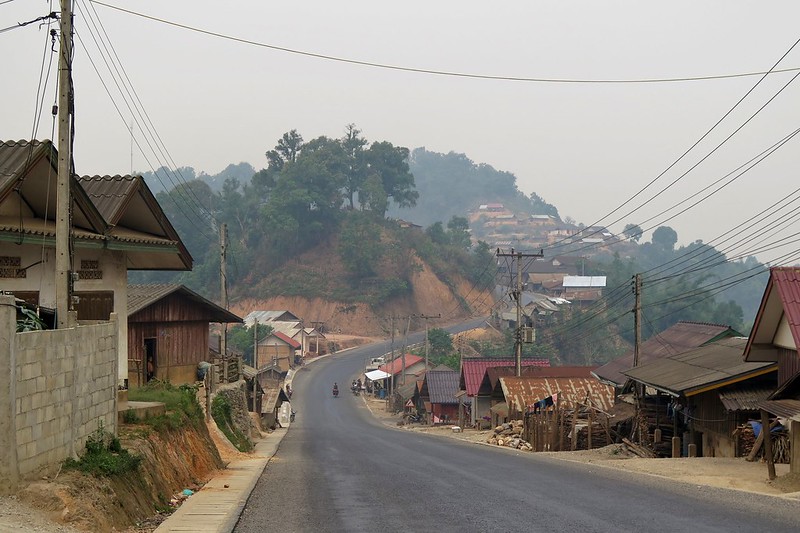 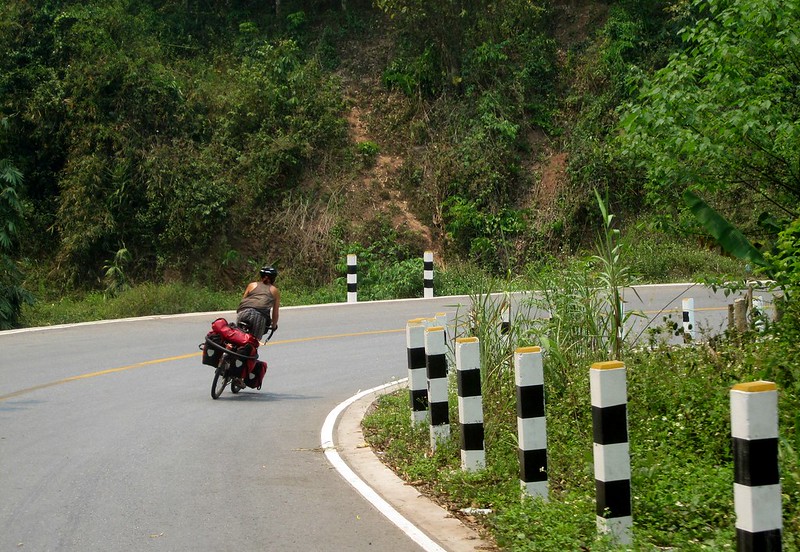 We reached flat ground with just 10km to get us into Oudomxay. Very soon after getting into the valley, a passenger aircraft roared overhead, climbing out from the local airport. It cranked into a tight turn at quite low altitude, obviously to avoid the mountains lurking just out of sight in the haze. We actually had a cycle path for the final few kilometres, getting into the town centre by 1:30. 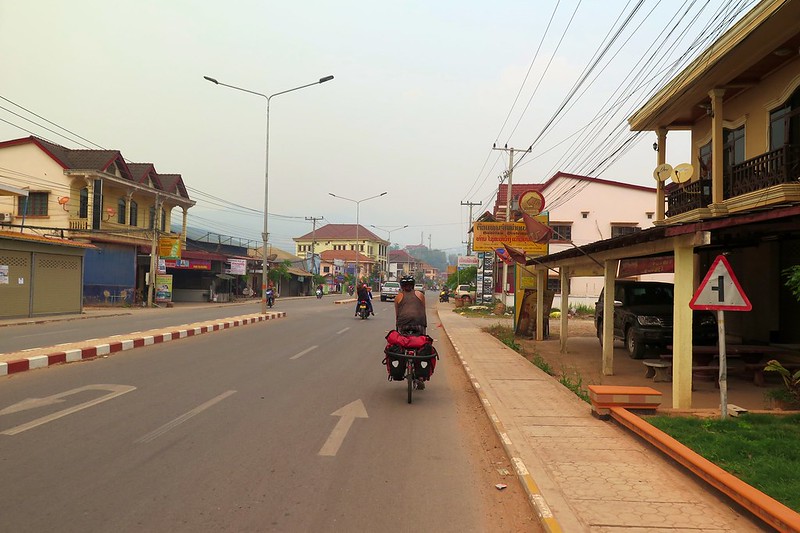 We tried a couple of guesthouses, deciding to stay in the second. Both had stickers from motorbike and cycle touring companies – this is yet another common stopping point on the route into China. From here, it’s just 100km to the border. This is the route from Luang Prabang to Oudomxay: 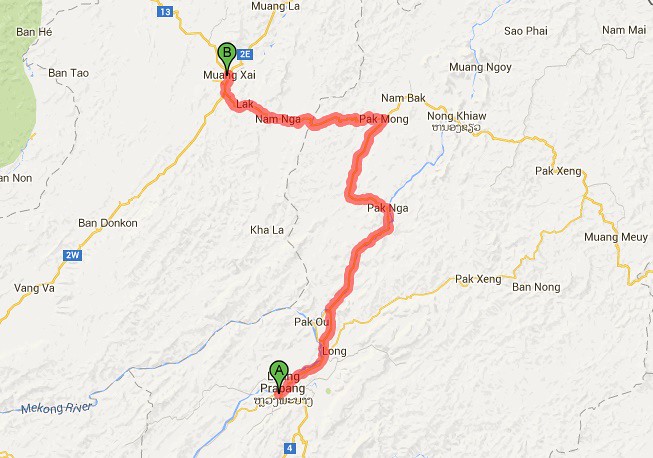