We said farewell to Todd and Vicky in Napoli as they couldn’t be persuaded to join us on the bikes. Something about jobs and lives back in the UK, and not really liking cycling that much. They took the easy way home, on board a British Airways 737, while we got back on our Long Haul Truckers and rode out of town. We didn’t want to ride far on that first day, as its always a bit slow leaving a city and cycling through the suburbs. We’d arranged to stay with a Warmshowers host about 30km away in Santa Maria Capua Vetere. As expected, it was a slow ride, busy roads and numerous traffic lights hampered our progress, but we arrived at about 4 o’clock as planned. Our host, Cristian, was still at work, but he’d arranged for a friend, Annalisa, to meet us and show us around town. There was a big amphitheatre which we looked around, and then a museum with a large exhibit about the Appian Way, a route we’d followed for some of the ride from Bari. Later in the afternoon we followed Annalisa back to Cristian’s house where we were spoilt with a delicious meal prepared by his mother. 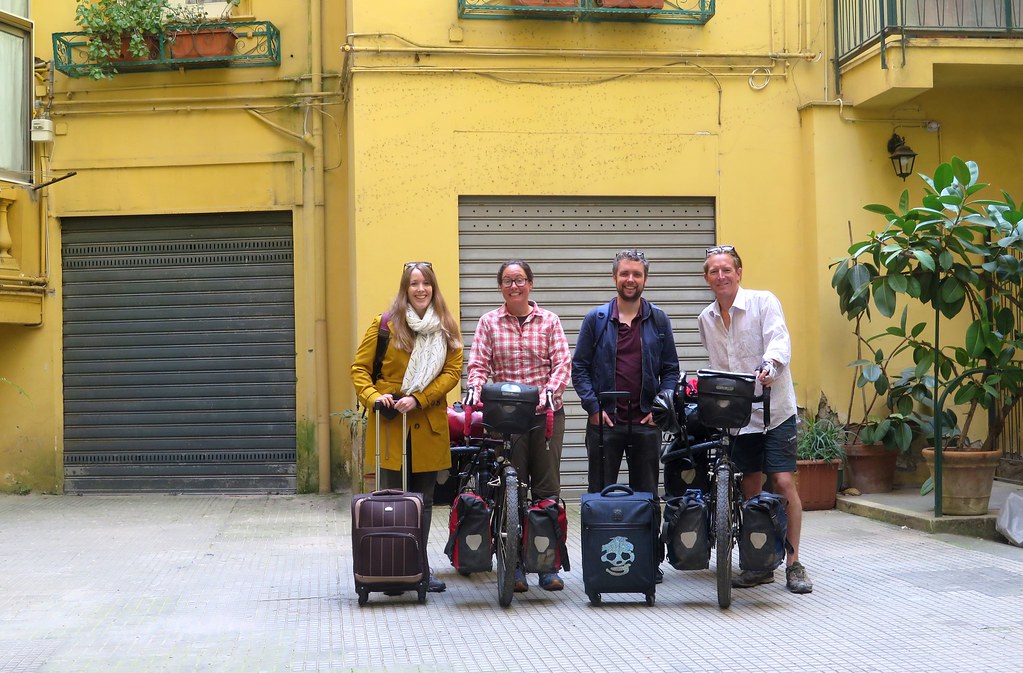 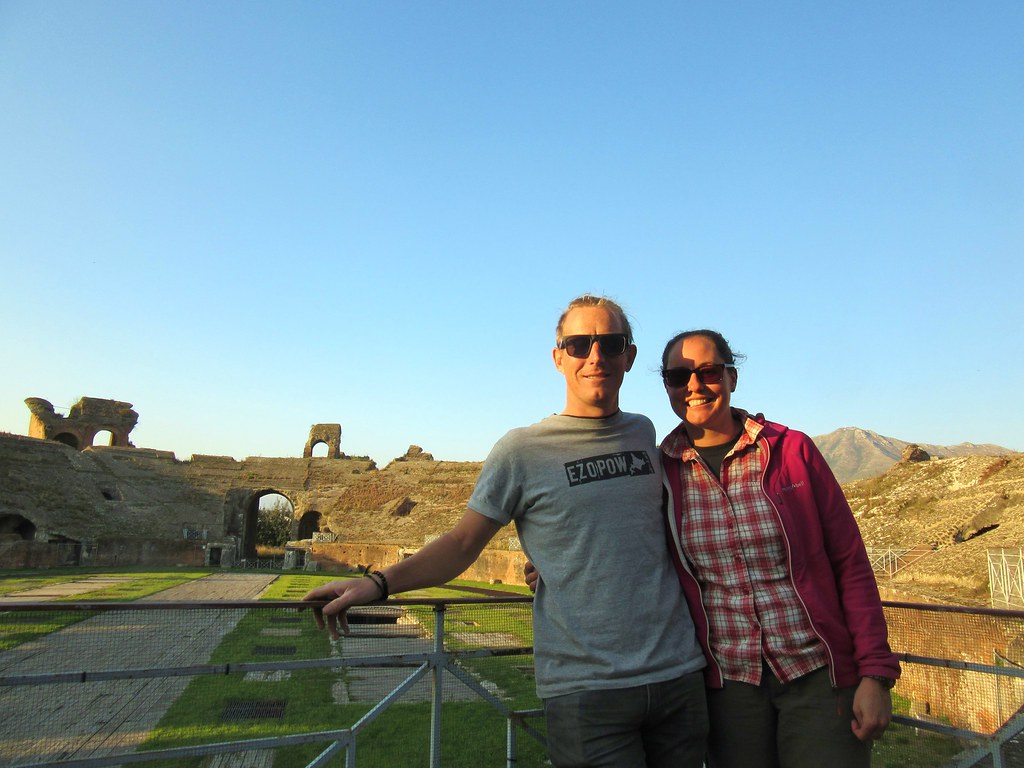 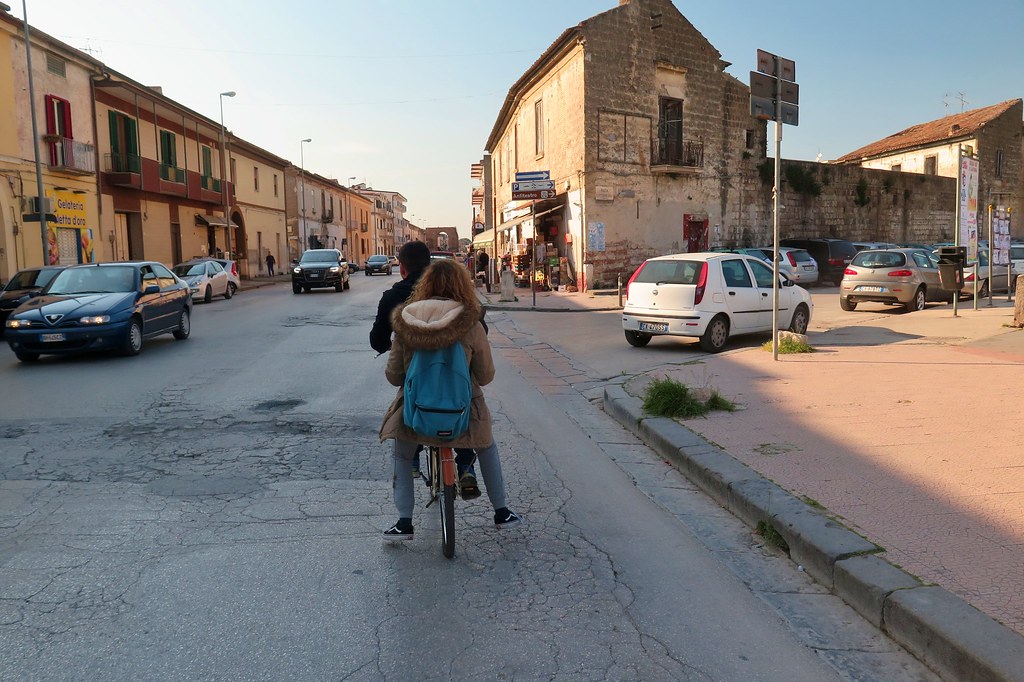 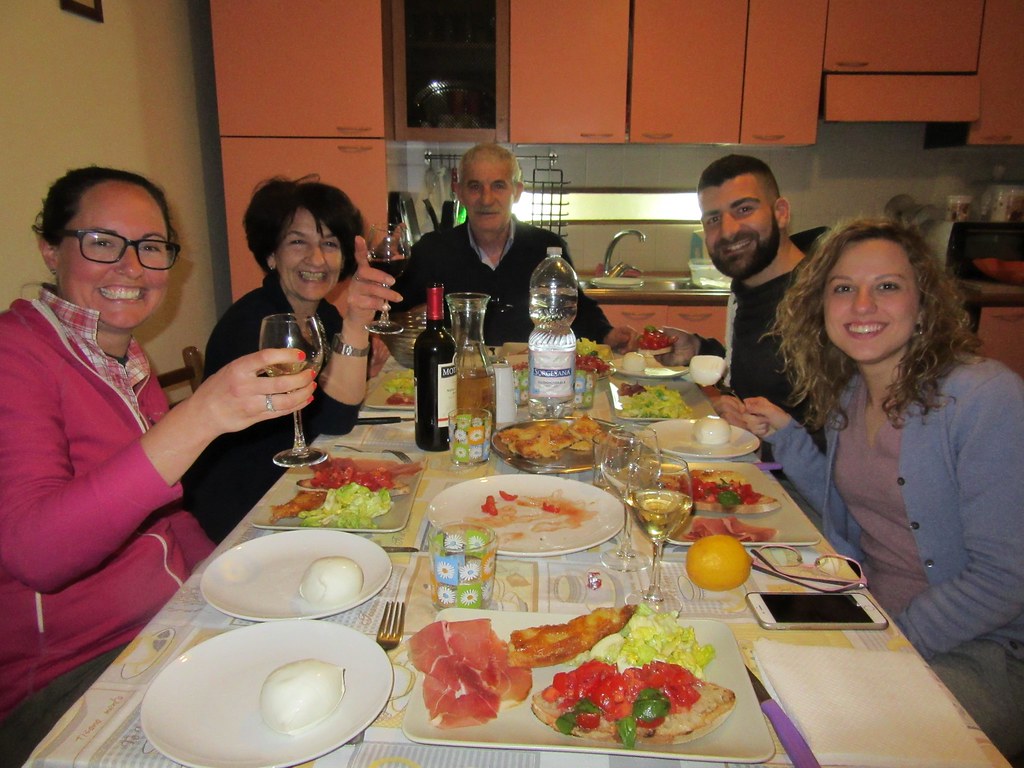 From St Maria, after breakfast and heartfelt goodbyes, we cycled west towards the coast. The weather was good, but the roads were still quite busy so we took regular breaks to sit in the sunshine and enjoy the views. The trees are all blooming with flashes of white and pink all over the countryside. The 60km to a beach that Cristian had recommended went by quickly, and we pushed our bikes around a small cliff to a quiet cove. There were a few sunbathers and fishermen, but they disappeared before sunset, leaving us in peace for our final time camping on a beach in what will probably be a long while. 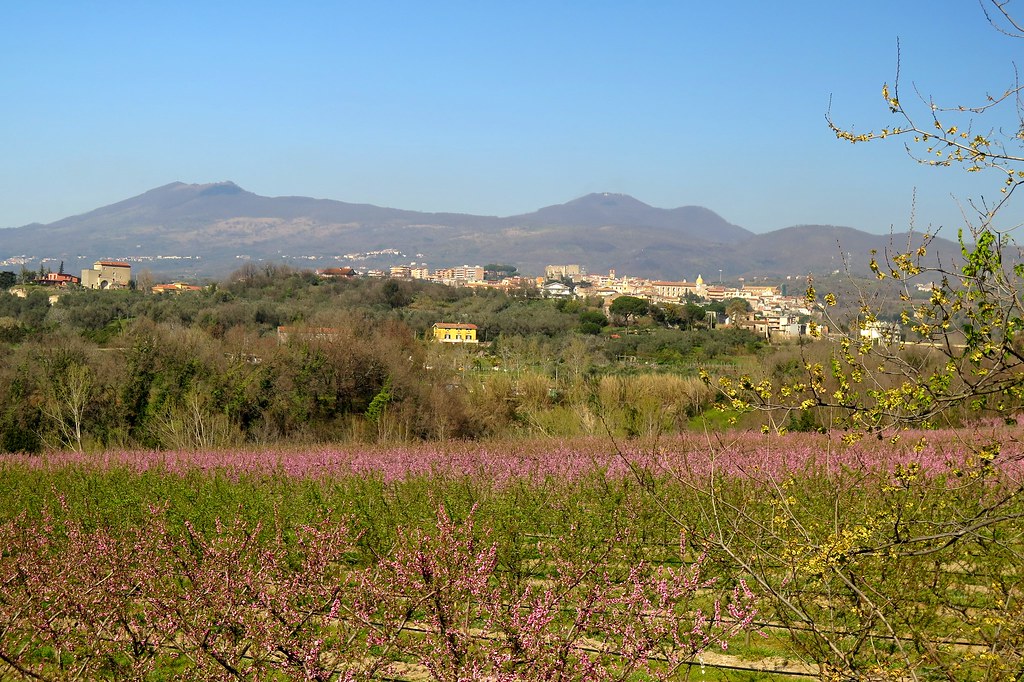 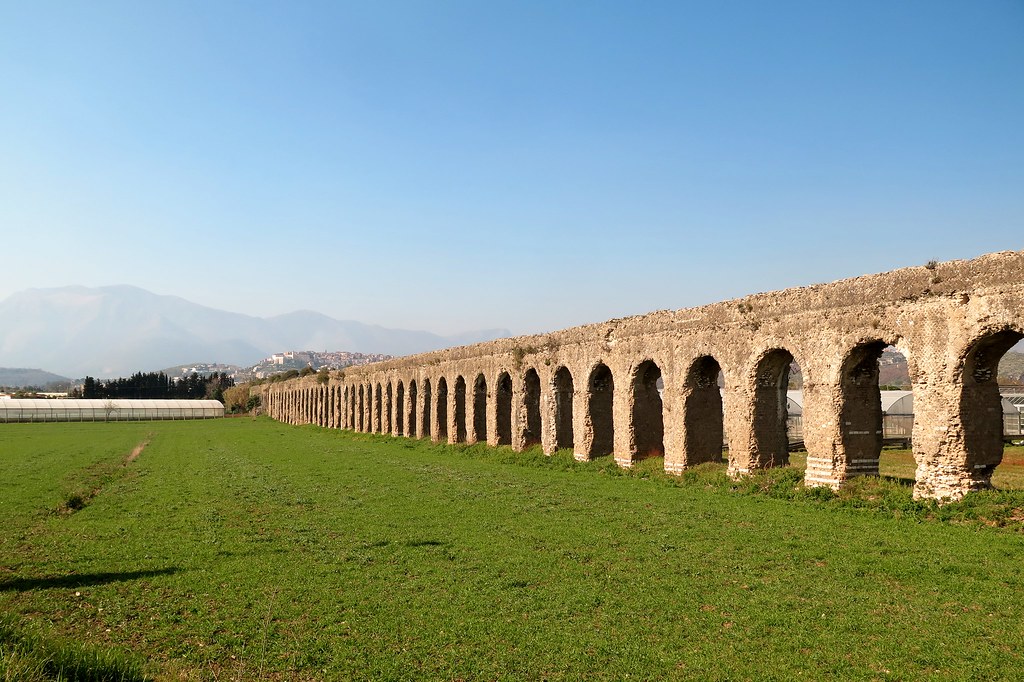 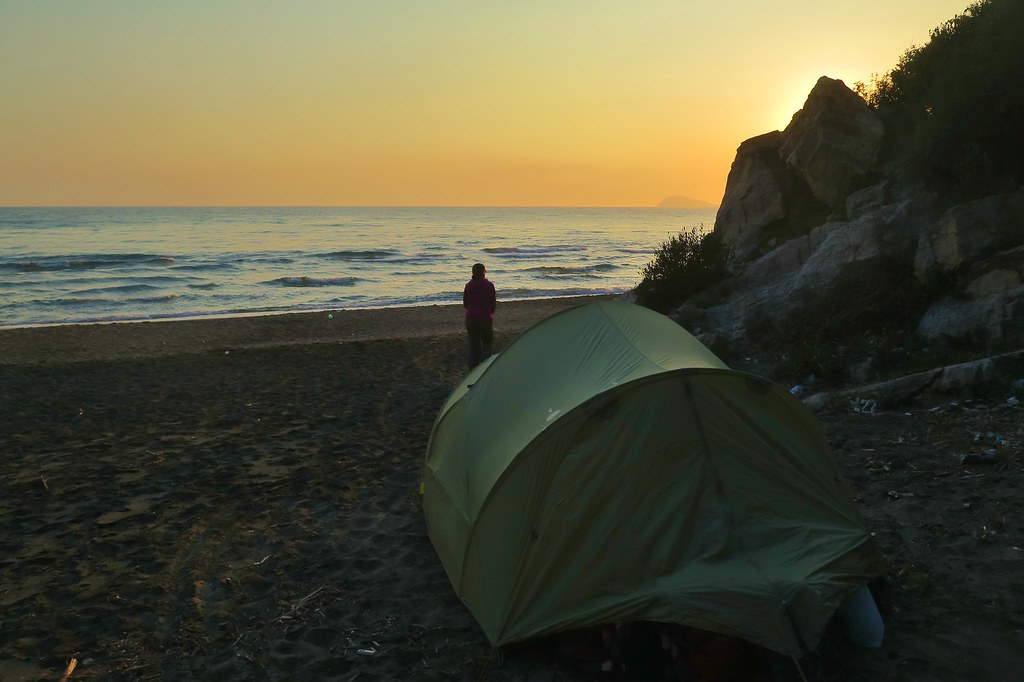 The next day was very leisurely, we took our time packing up, waiting for the sun to hit the tent over the cliffs before taking it down. We took the coast road, slowly riding north and west with plenty of stops through the day. It was a Saturday and it’s definitely feeling like spring with lots of people out and about jogging, cycling and generally getting some fresh air next to the sea. The coastline started to get rockier, with taller mountains ahead and cliffs dropping down to the sea. The road climbed up, hugging the cliffs, with signs for private beach clubs tucked away down steep steps to our left. 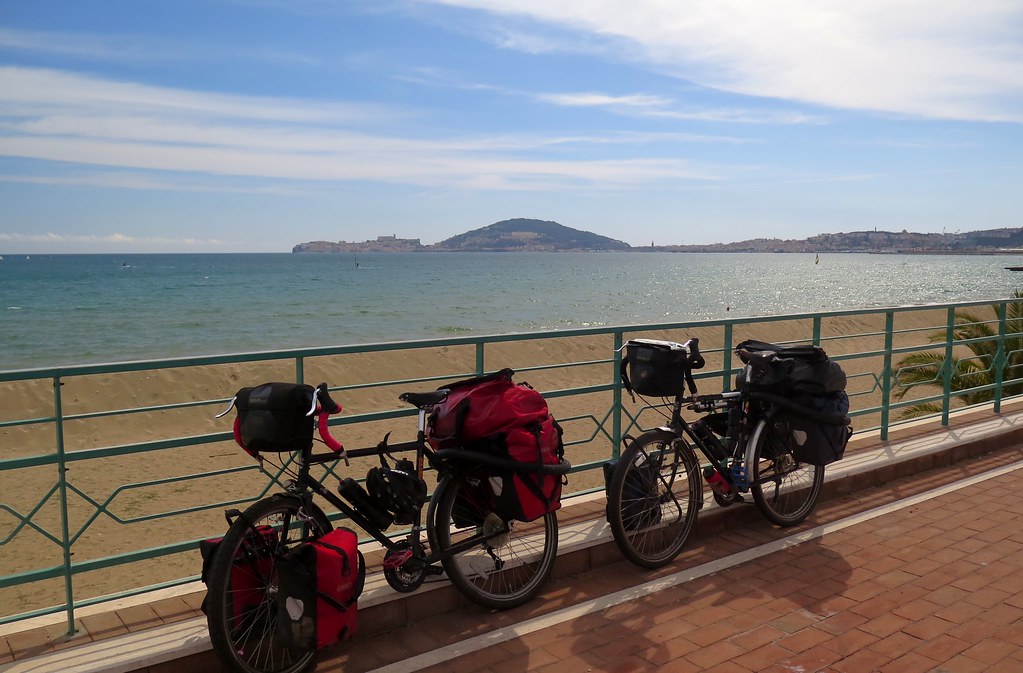 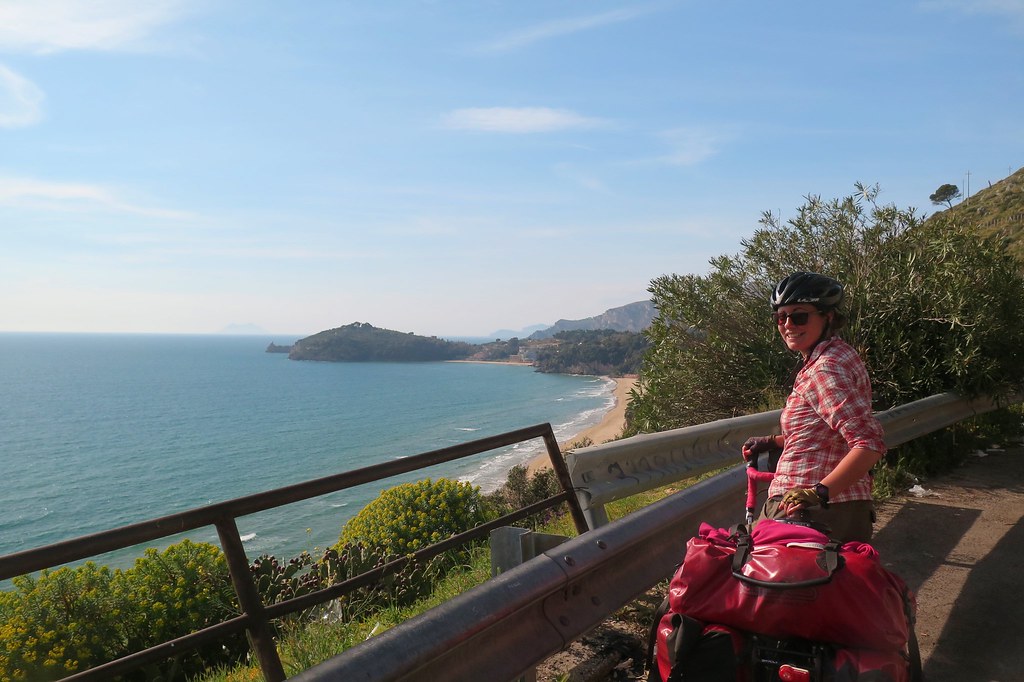 The beach that we’d hoped to camp on near Sperlonga had a small public area with very clear no camping signs, the rest of it was closed off by more private access bars and clubs. We continued on, trying to figure out where to pitch our tent, the road climbed again and entered a tunnel. Through the openings on the wall of the tunnel, I spotted a ledge between the wall and the cliff edge, with more than enough flat space for our tent. I yelled ahead to Clare, then we stopped, and unloaded the bikes. We had to pass the panniers through first and then lift the bikes themselves up and through the tunnel wall. It was a great spot, a perfect view of the sunset and no real chance of being spotted from the road. There was a bit of noise from the tunnel, but we slept ok. 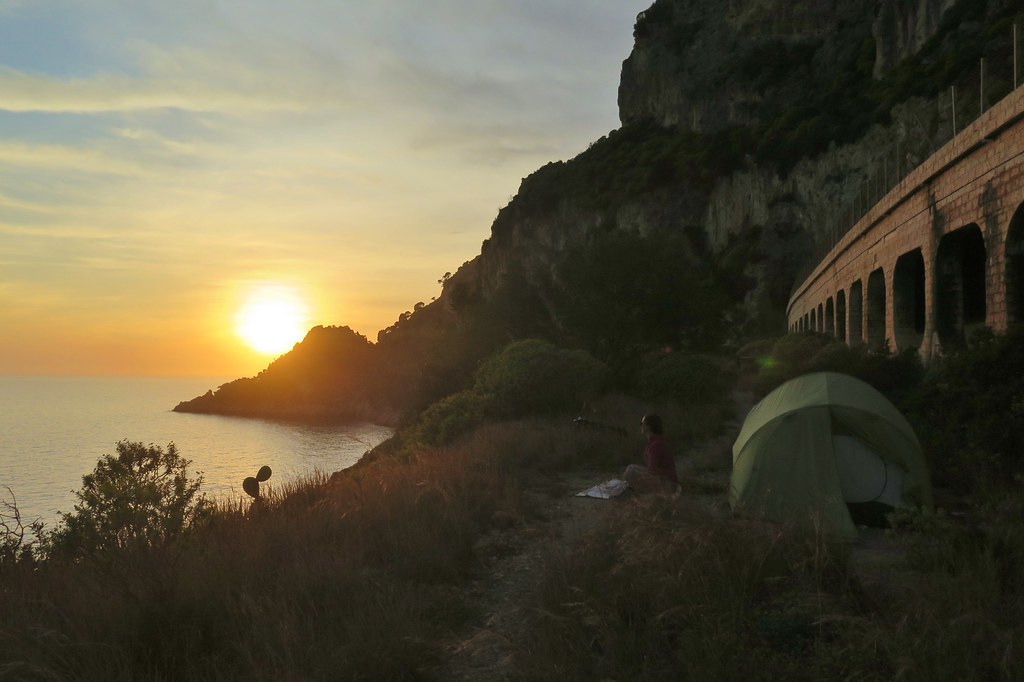 From Sperlonga, we cut inland through the mountains. We were unlucky with the weather as the mountain pass took us up and into the cloud layer, depriving us of what should’ve been a great view from the top. The climb wasn’t too bad, a long but gentle gradient winding its way around the countours. Mid morning, we saw a load of official vehicles coming in the other direction, then a couple of road cyclists speeding downhill. They were followed soon after by a peloton and numerous other motorbikes and team cars. Turns out we’d stumbled on a bike race. We watched the rest of the pack heading downhill for the next couple of hours. The more serious cyclists at the front weren’t interested in returning our waves, but some of the stragglers at the back gave us a ‘Ciao!’ or a thumbs up. 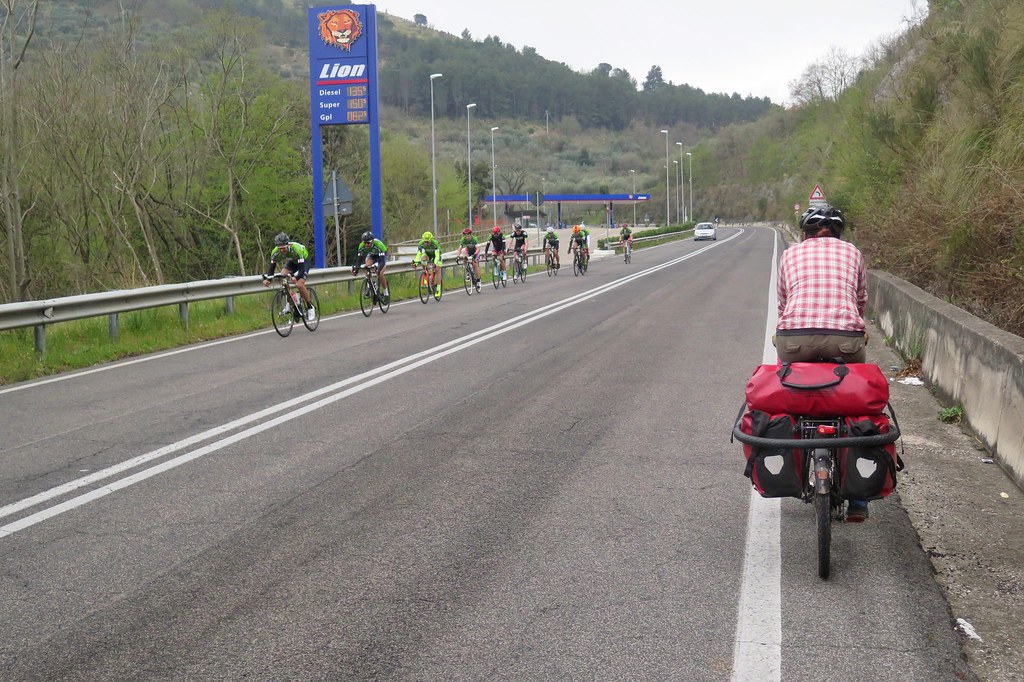 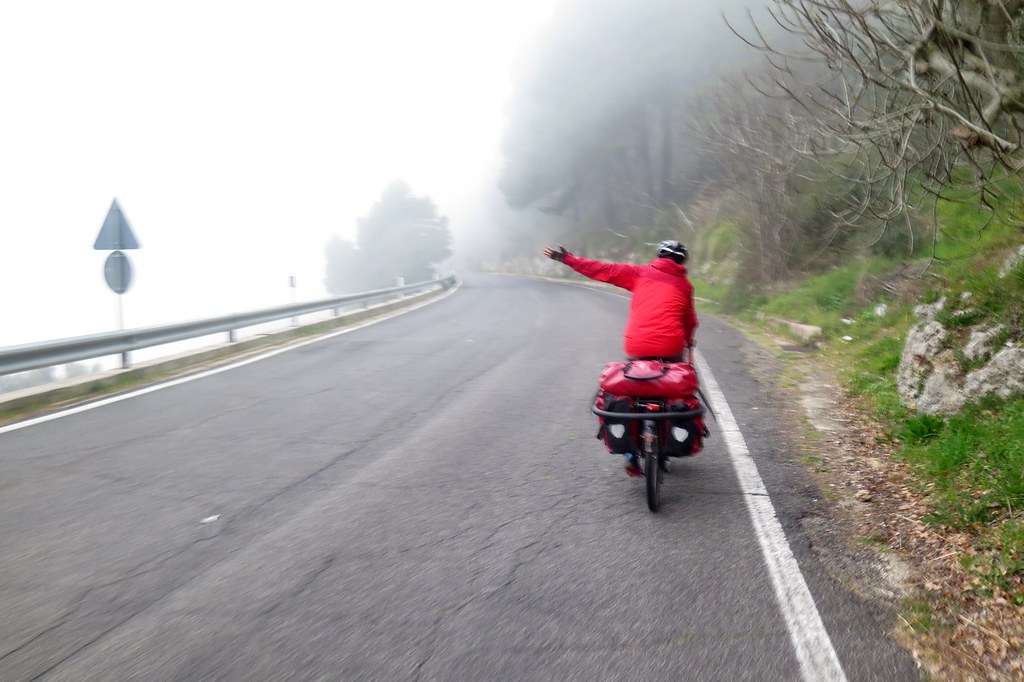 We reached the top of the pass in the clouds and started down the far side towards Pofi. We were killing time now, as we were meeting another Warmshowers host, but not until 7 o’clock. We stopped into the old hill town for a look at the cobbled central square and for one of those amazing Italian hot chocolates that are so thick that the spoon stands up. By 6, we’d made our way to Sant’Antonio Church near Frosinone, where we were due to meet Antonio, our host. We waited. And waited. Until nearly 8. I went to a cafe and called Antonio, who was also waiting for us at the church. Turns out there are two churches of the same name. I’d messed up, and found our way to the wrong one, about 8km from where we were supposed to be. He came out and met us in his car, and we followed him in the dark up and down through the steep hills into the centre of Frosinone to his apartment. A bit of a stressful end to the day, but we were again treated to a delicious meal, rounded off with special pastries for Sant Guiseppe’s day. 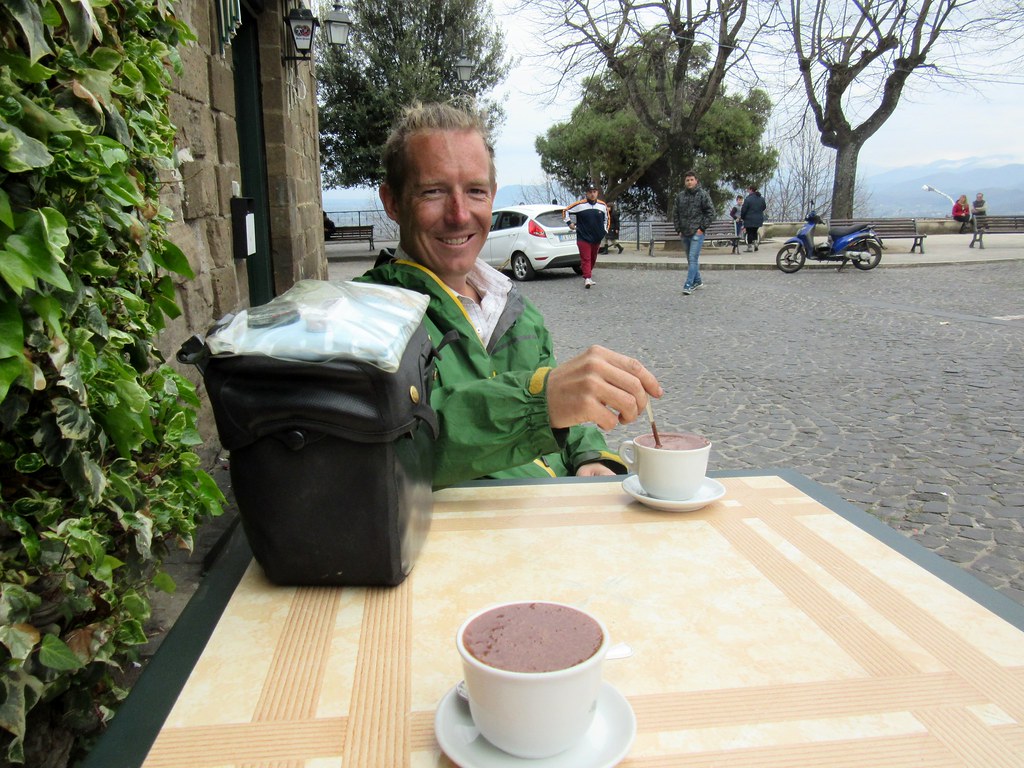 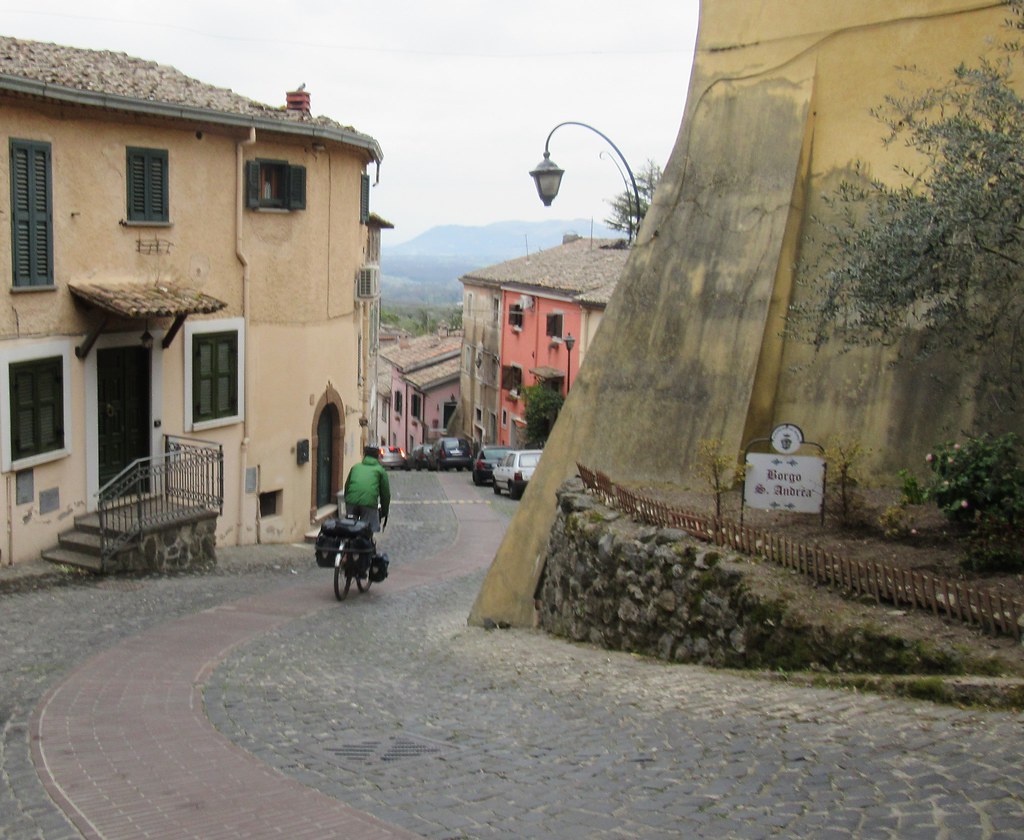 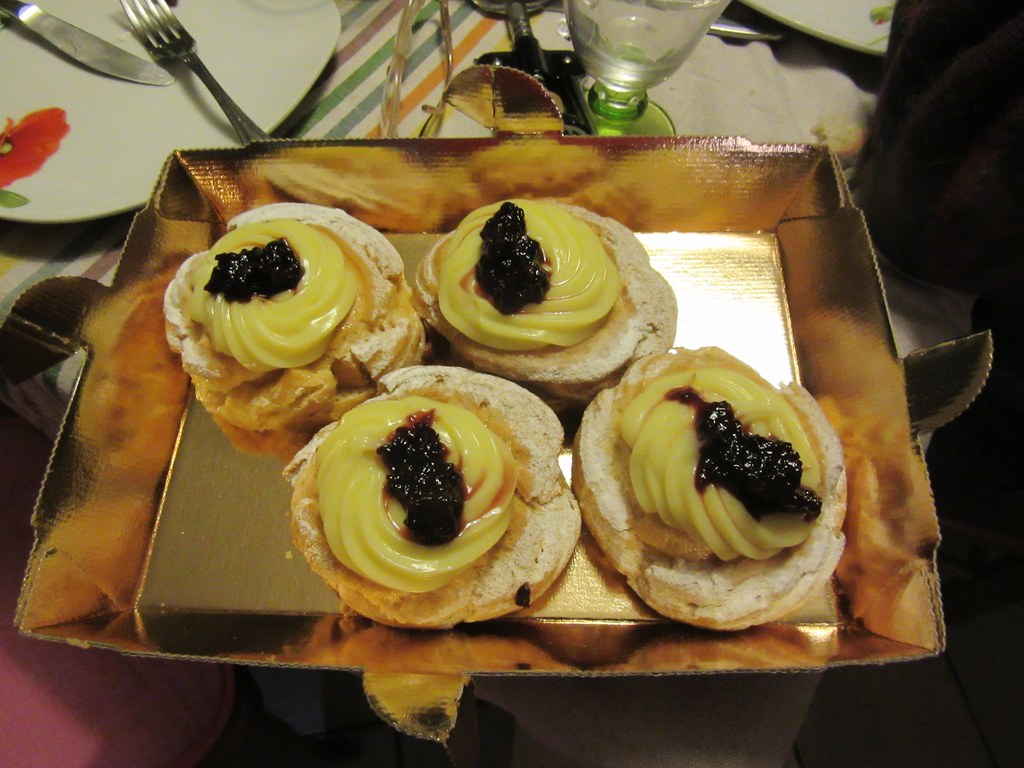 Antonio gave us some good information for the route we should take away from Frosinone. We were keen to avoid the urban sprawl of Rome, so he suggested a couple of places in the mountains of Lazio that would help us to give the city a wide berth. It meant another couple of days of climbing, but that’s pretty much inevitable when you’re cycling in Central Italy. The first day took us up and over the Altipiani (plateau) di Arcinazzo, at 1,000 metres. Once we were away from the town, the roads were empty so we could take it easy and chat as we rode. The most inconvenient traffic we met was a herd of cows that didn’t want to budge from the middle of the road. Up on the plateau we crossed a huge open grassy valley, then passed a crazy little mountain town that felt more like a Swiss ski village than Italy. We got a lot of waves and hellos. One guy, once we told him we were English, invited us in for a coffee, but only after he’d asked us and we’d told him that we weren’t in favour of Brexit. 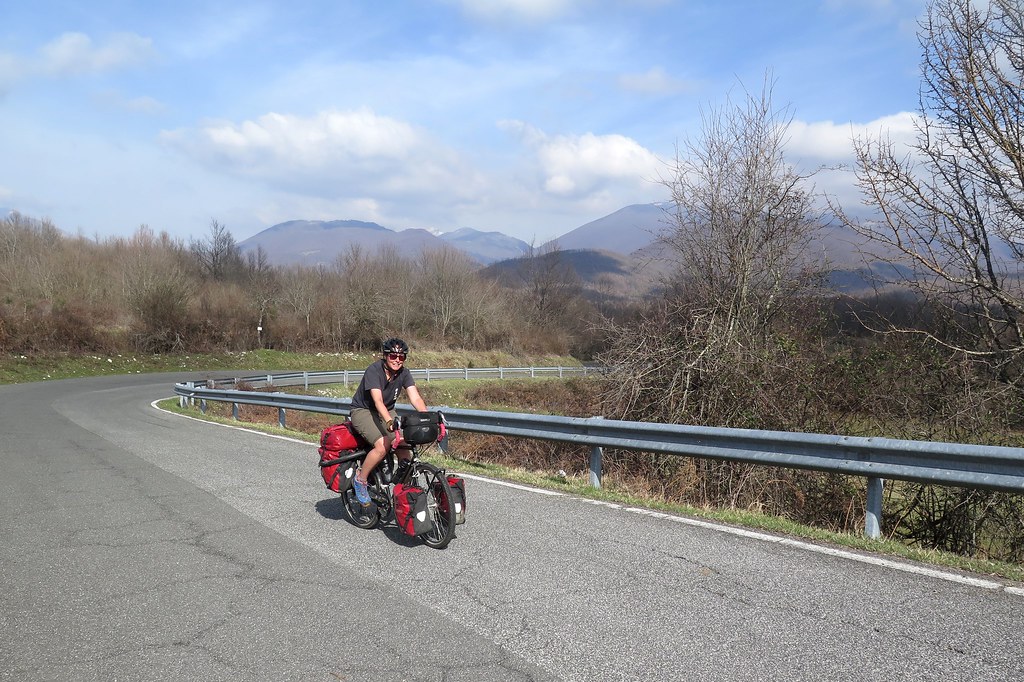 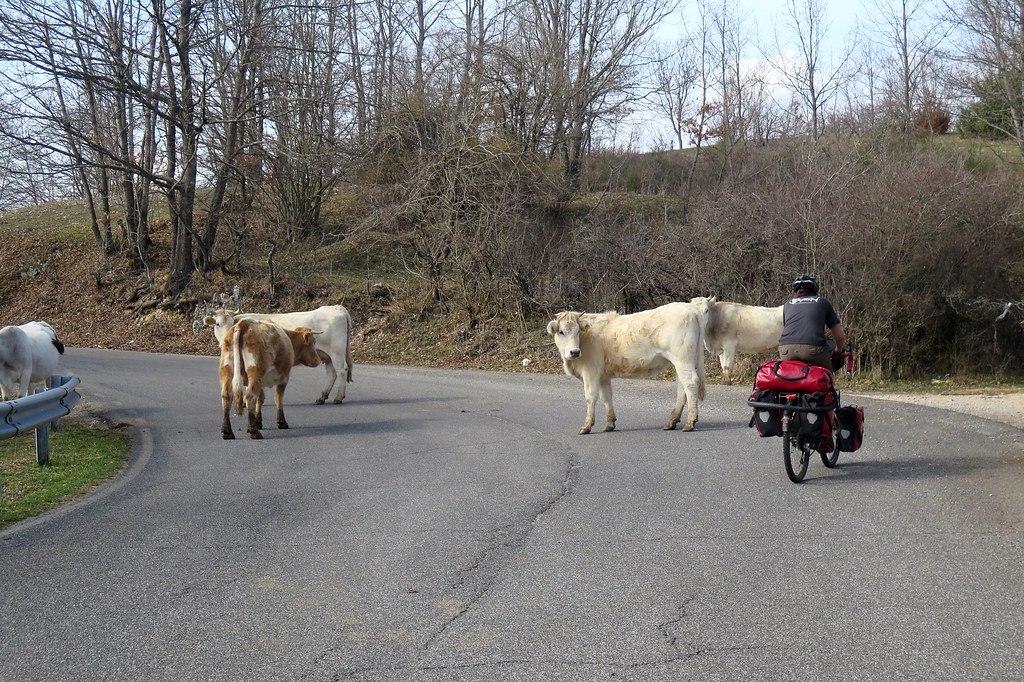 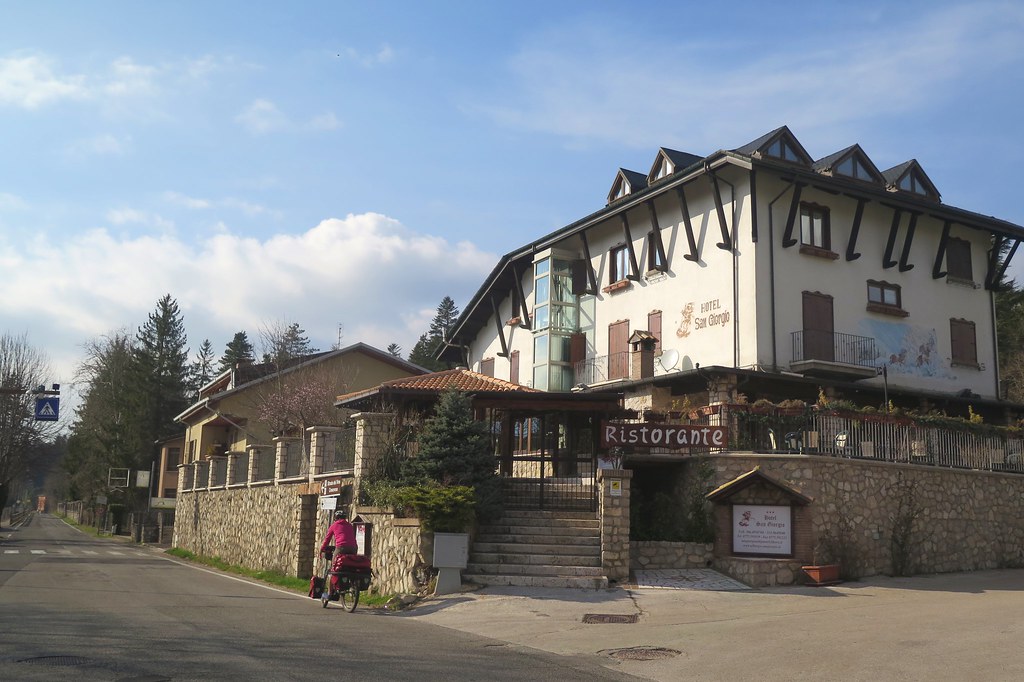 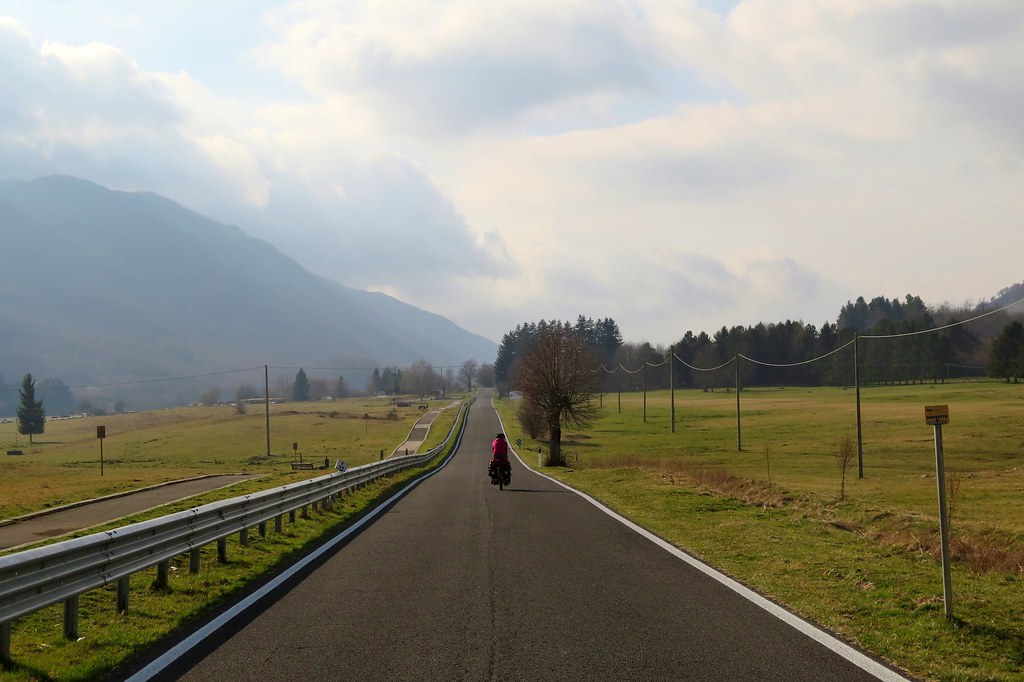 From 1,000 metres up, we had a long swooping downhill to the town of Subiaco. All of the hill towns here are spectacular, but Subiaco is quite a large and well known one. It was really clogged up with traffic on the steep and narrow roads through the centre. The drivers are all very courteous though, giving us plenty of room and letting us slip through the gaps in traffic. On the far side of town, the downhill continued for a few kilometres, following a river. We pulled off the road down a narrow track to find a campspot in the forest next to the river. It was a good night’s sleep and we woke to a clear blue sky. 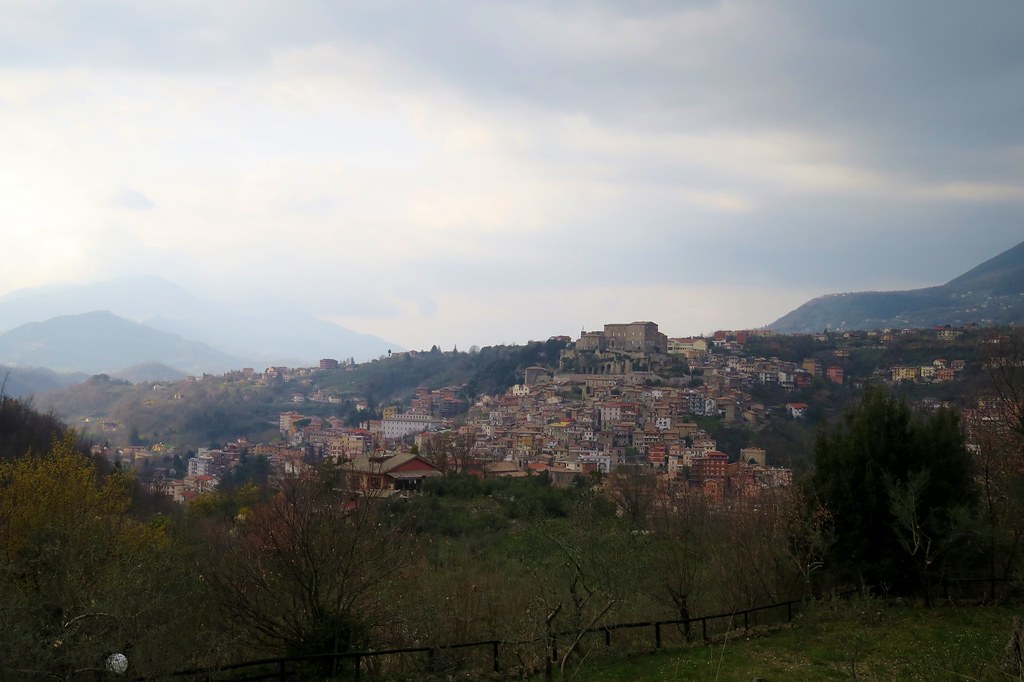 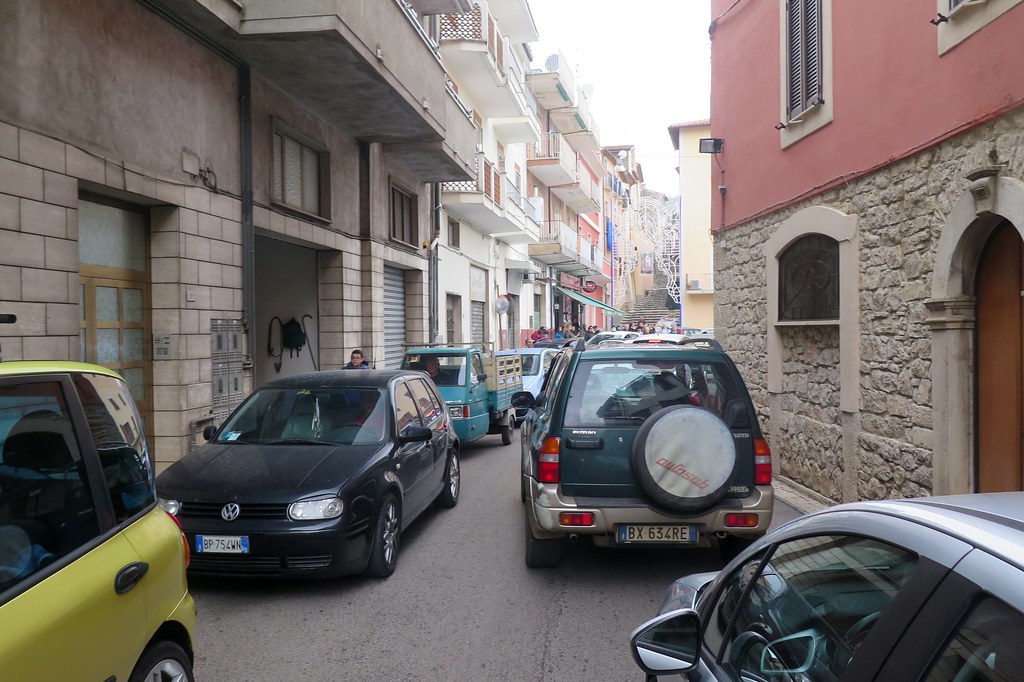 Now that we’re inland, it’s feeling even warmer than it was on the coast. The temperatures are way up in the 20s and we’re staring to get our South East Asia tans back. We were in shorts and tshirts all day, and feeling very hot on some of the climbs. It was a real pleasure to be cycling through the hills on such a beautiful day though, exactly how we pictured and hoped Central Italy would be. Hard work at times, but infintely rewarding. 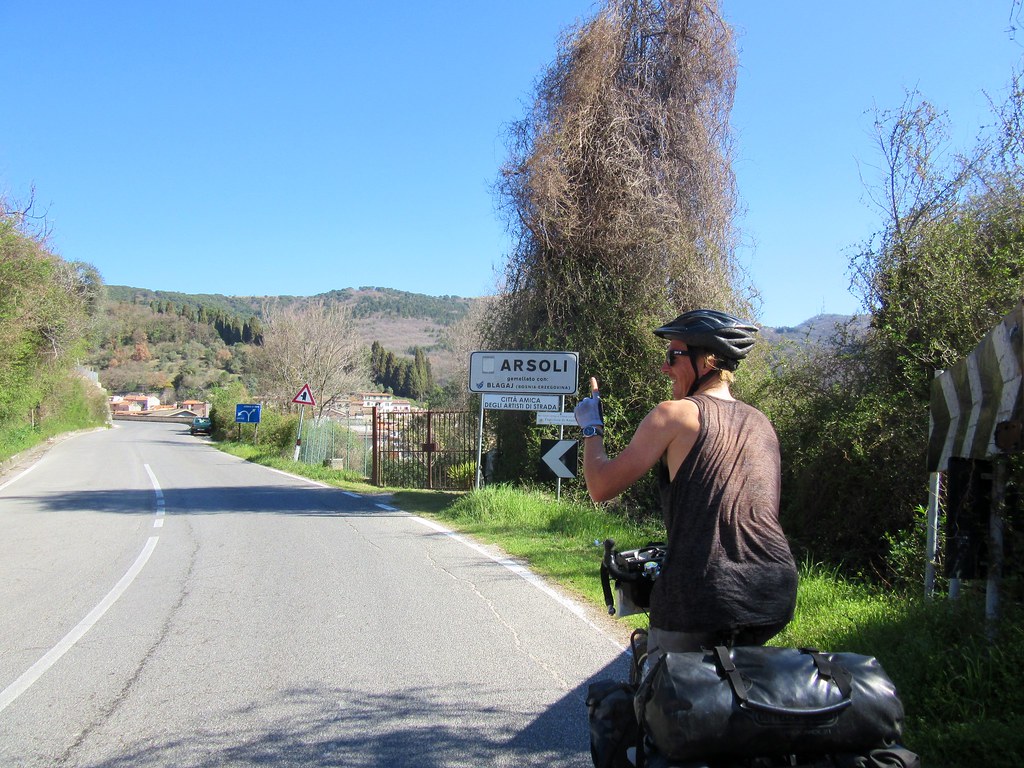 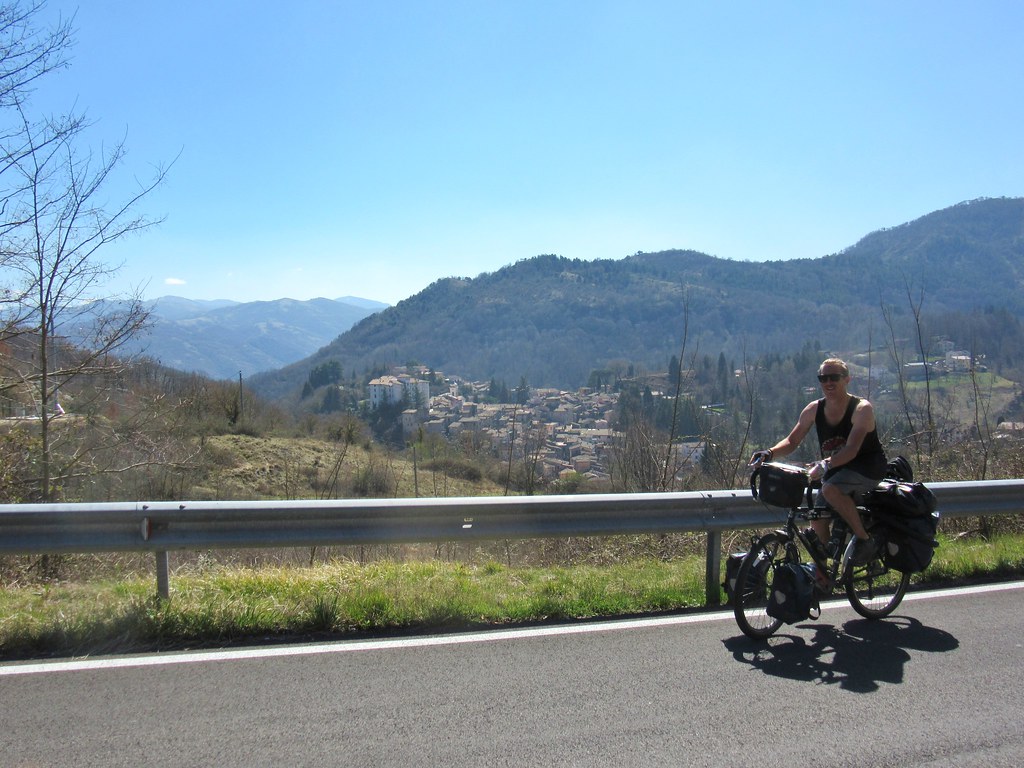 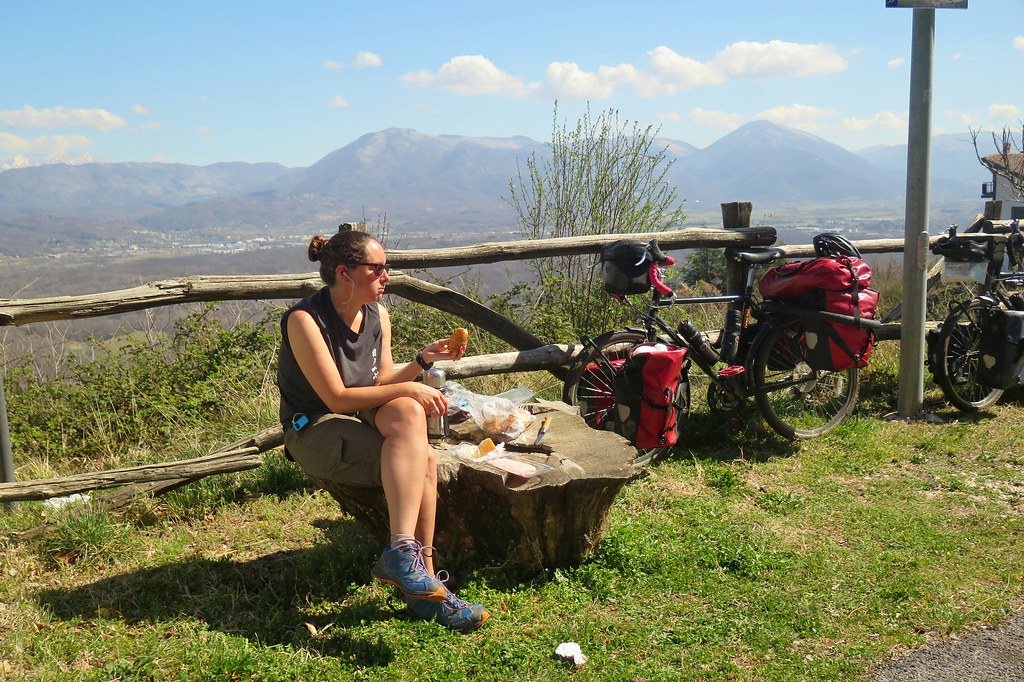 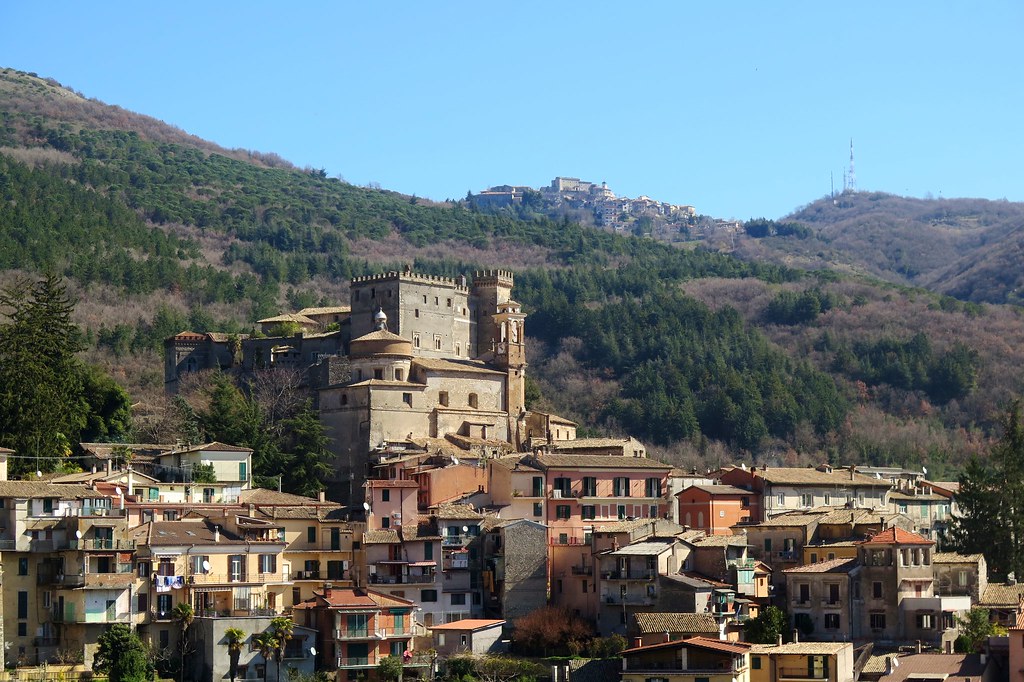 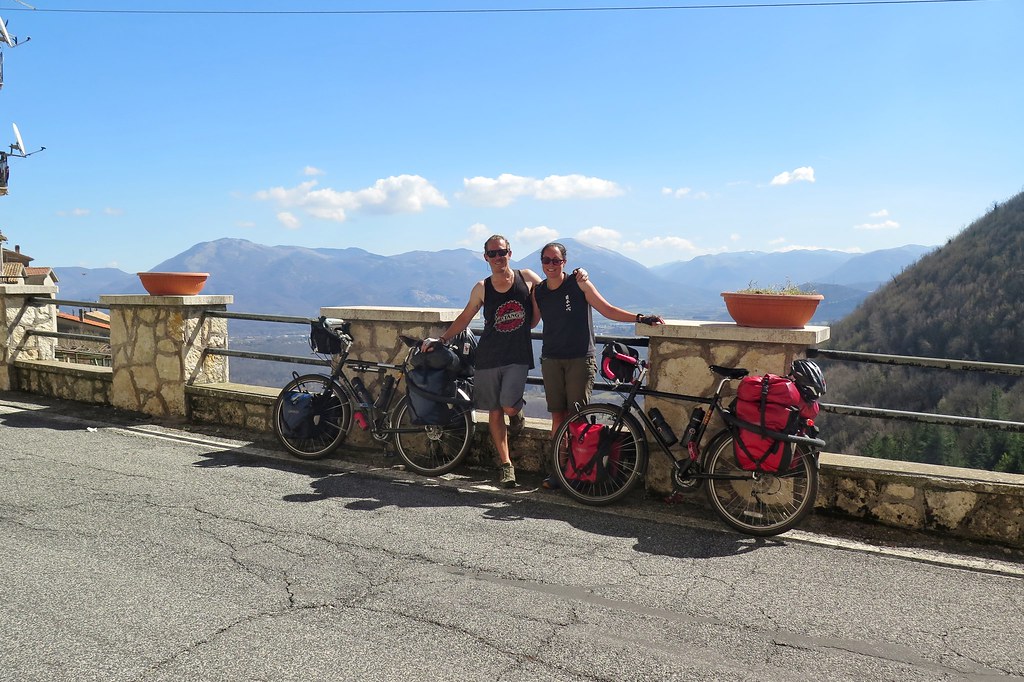 We’d spotted a real deal for accomodation on Booking.com in a random little town called Montopoli in Sabina. We’ve got plenty of time to get to Florence to meet our friend Suzi, so we decided to take a day off there. With about 20km to go, and some good altitude in the bank, we started a long descent, coasting down for a good 30 minutes. We thought it might take us all the way, but just before reaching Montopoli, we rounded a corner in the valley and saw the town perched up above us on a hill. A hard slog to finish the day in the afternoon sun. But we arrived eventually, slightly sweaty, but smiling. We’d scored a lovely little house, with a balcony overlooking the valley and mountains to the South. A perfect place for a lazy day off doing not a lot but drinking coffee (and maybe a wine or two) and catching up on blogs, Skype etc. 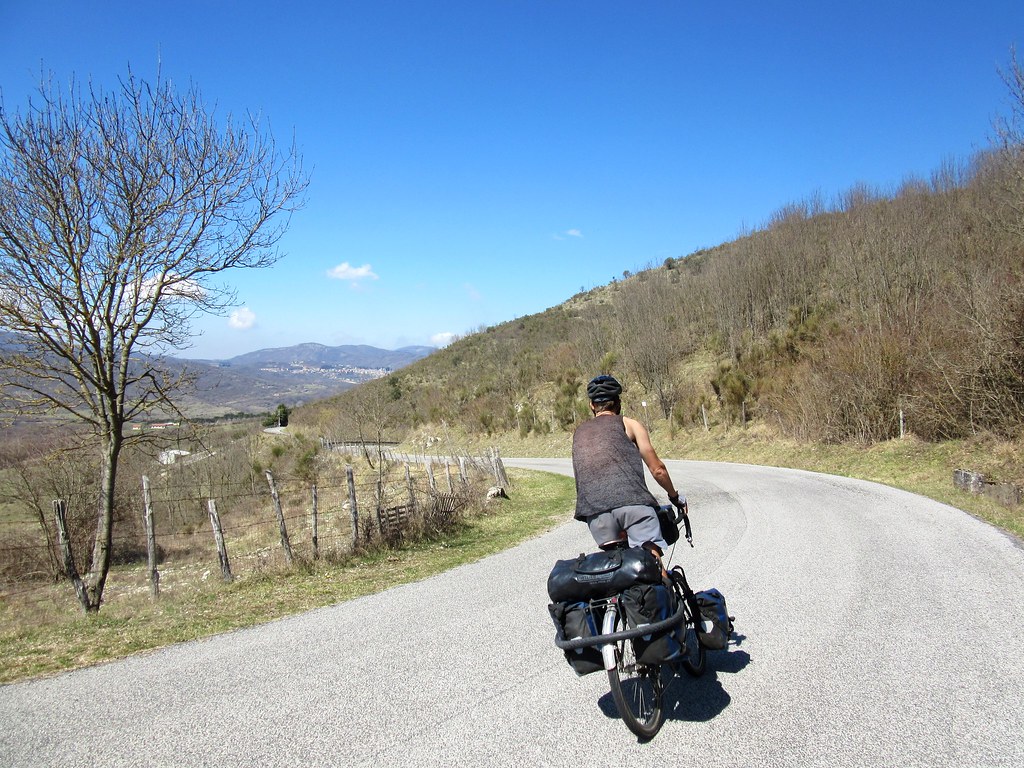 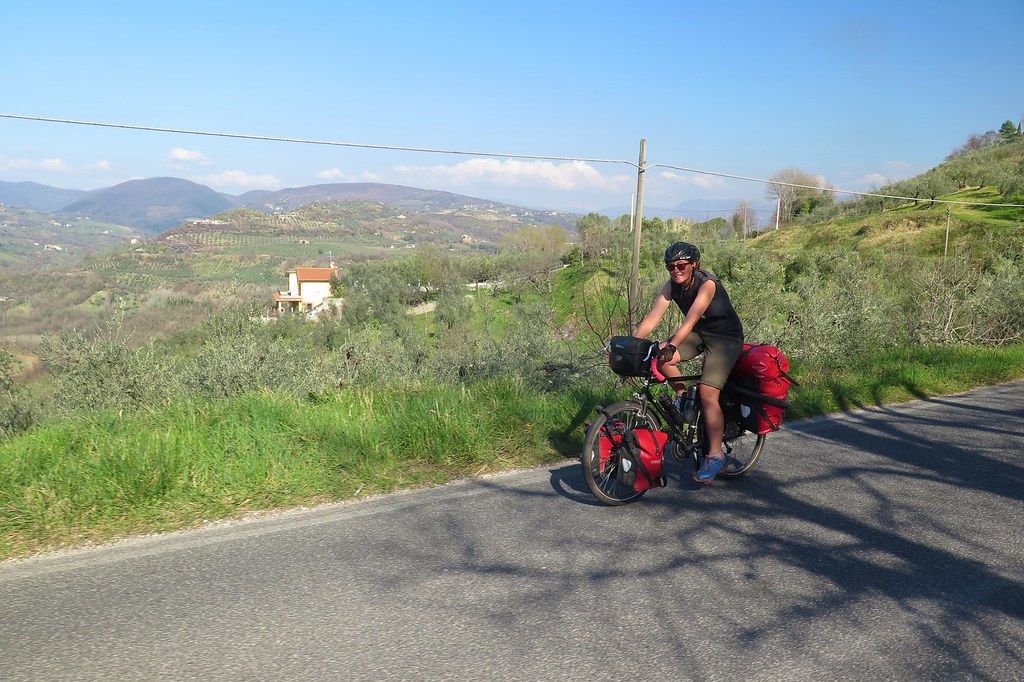 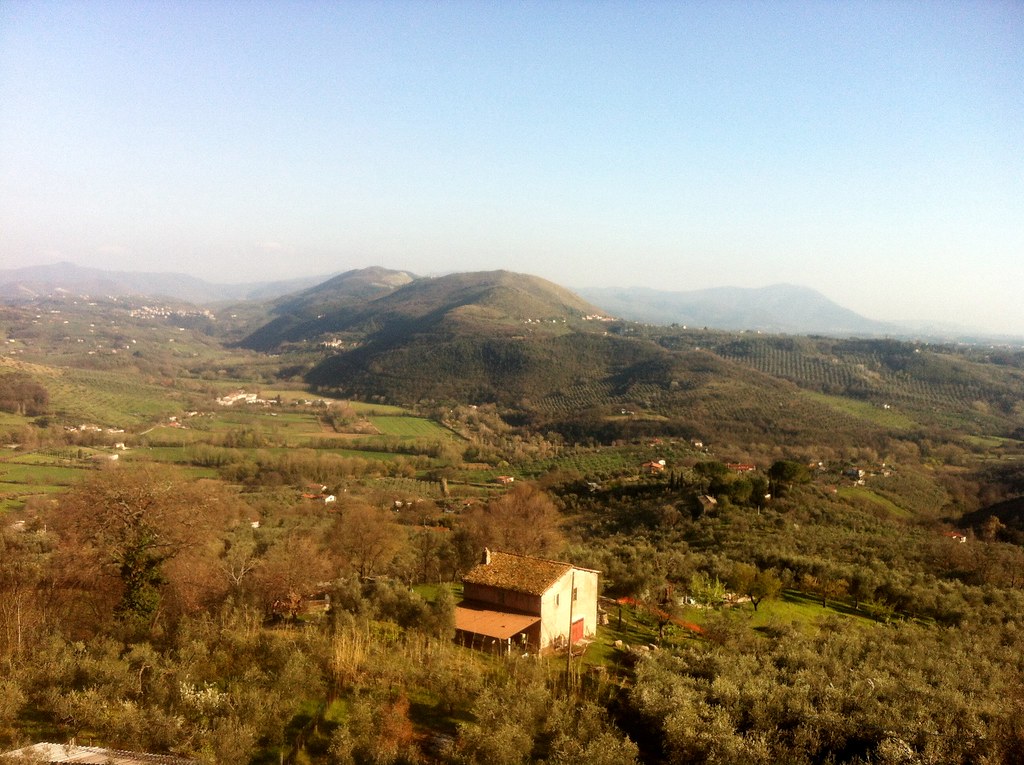 We’re aiming to arrive in Florence by the middle of next week, so from here we should be riding through some of the best of what Umbria and Tuscany has to offer. Here’s our route so far from Napoli to Montopoli: 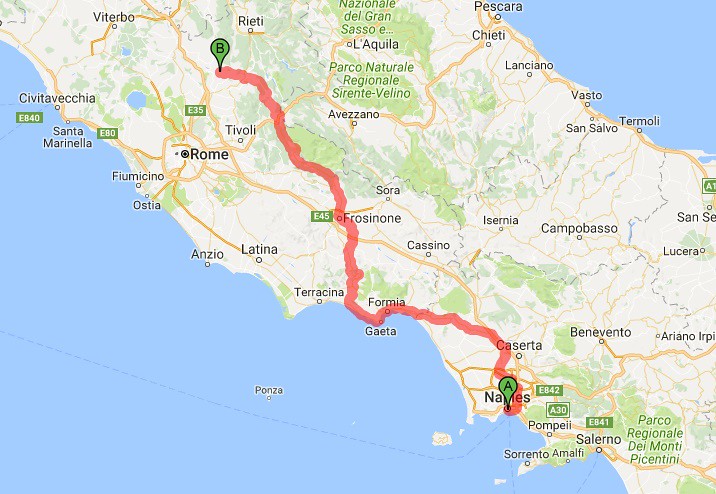