Georgia was another country we didn’t know too much about before going there, as it wasn’t one of the original countries we were planning to go through. As we met more and more cyclists we only heard good things about Georgia and so our excitement to get there increased as our trip went on. It didn’t disappoint, apart from on the weather front, great food, wine (yep those are the first two on the list), people, landscape and architecture. Another relatively short time in the country but definitely on the list of places to go back to, in a better season. 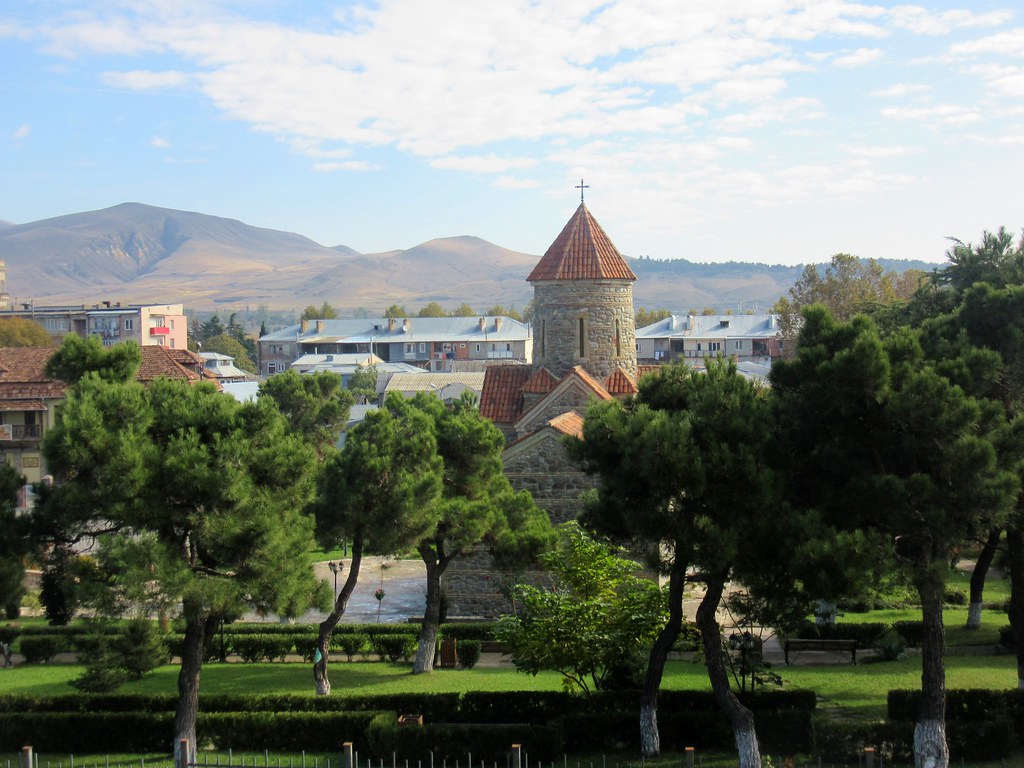 People were welcoming and kind. As soon as we crossed the border we stayed in a guesthouse not too far on. It was a brilliant first impression and we decided to eat at the guesthouse for dinner and breakfast. We’d been told Georgian food is good but our first meal was an absolute feast, we had about 8 different dishes on the table. We did our best but couldn’t quite finish them all. Breakfast was no different and it gave us our first taste of Khachapuri, there are many different types and whole restaurants serving only these cheesy breads/pastries. They are perfect for us to snack on with lots of small bakeries along the road. 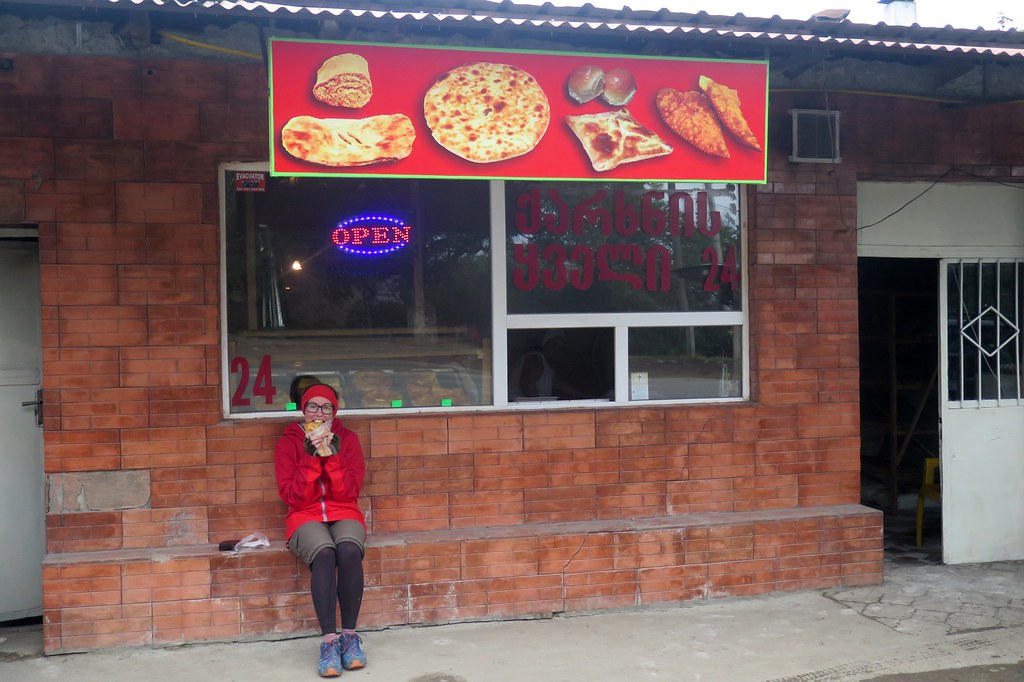 I digress. We had only good experiences when meeting the people in Georgia. Especially on our day of snow, feeling cold, wet and hungry we finally found what looked like a restaurant, we were looked after well, encouraged to drink the local spirit Cha cha (to warm us up!), and then not charged for our meal which became three times as many dishes as we’d ordered. We also found that a lot of people spoke extremely good English or someone would call up someone that did to come and talk to us. A very hospital country with kind and friendly people. 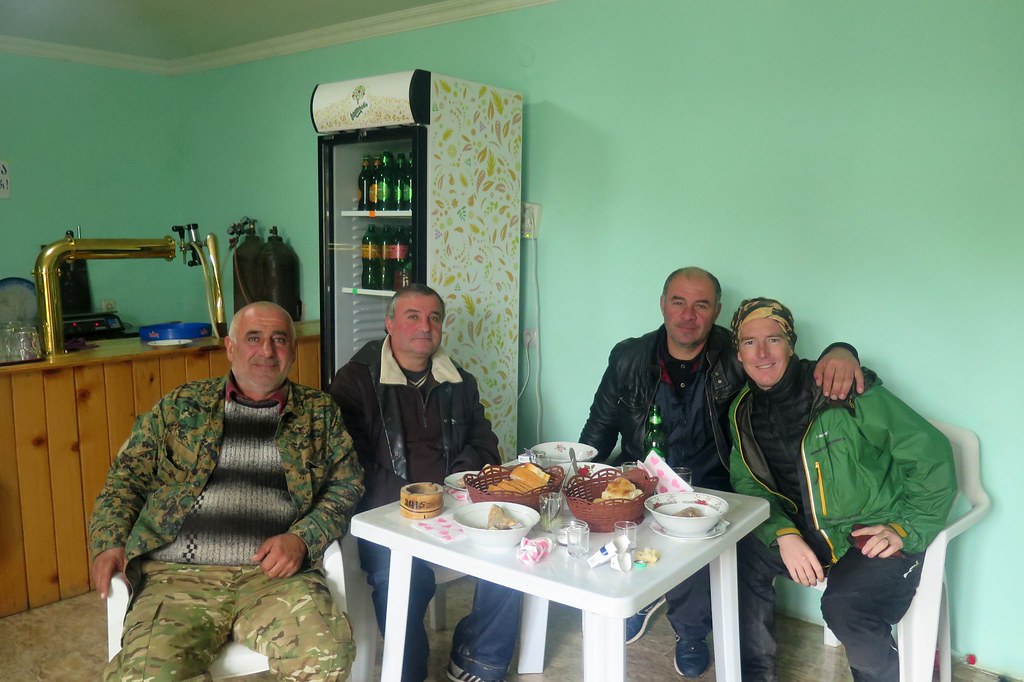 When we cycle we can go for days without reaching a place of interest to stop at, sometimes it is a matter of covering the distance and just getting there. In Georgia I didn’t feel this at all. We didn’t do very long days and we were usually heading to the next interesting place to stay. This is ideal cycling for me. We didn’t have a large distance to cover in Georgia and we weren’t in a rush. The biggest problem we had was the rubbish weather. Out of the 16 days we were there we had three days of sun, a couple of grey days where we just about managed to get the tent up or get into a place before the rain started, and the rest were rainy. With the rain it did mean we spent most of our nights in guesthouses/hotels which also meant we met lovely locals who were always kind and generous, so that was a plus. But just like Azerbaijan, we felt the trip would have been pretty different if the weather had been nicer, but even with the weather we still enjoyed our time in Georgia, which goes to show how much we enjoyed our time there! The landscape was interesting and varied, mountain towns with cobbled streets (beautiful but annoying to cycle over), rolling farmland, and fun cities. Being a dominantly Christian country there were stunning churches everywhere. I loved the Georgian houses and the stone and brick walls that ran through towns and villages. All great for looking at when cycling through. 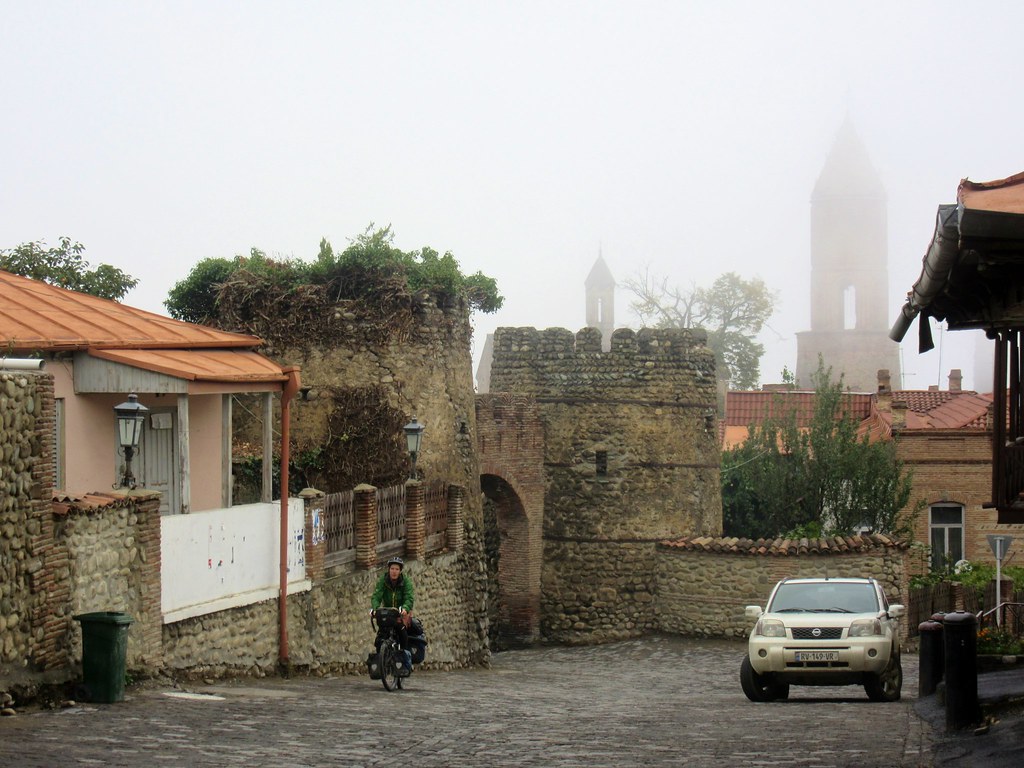 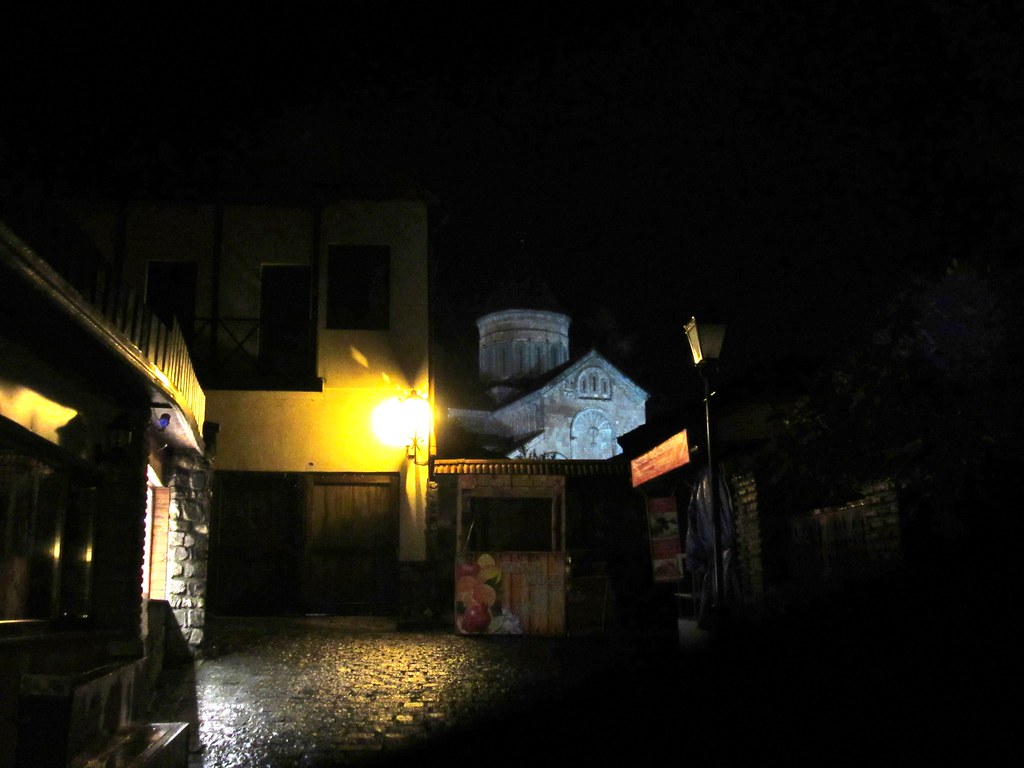 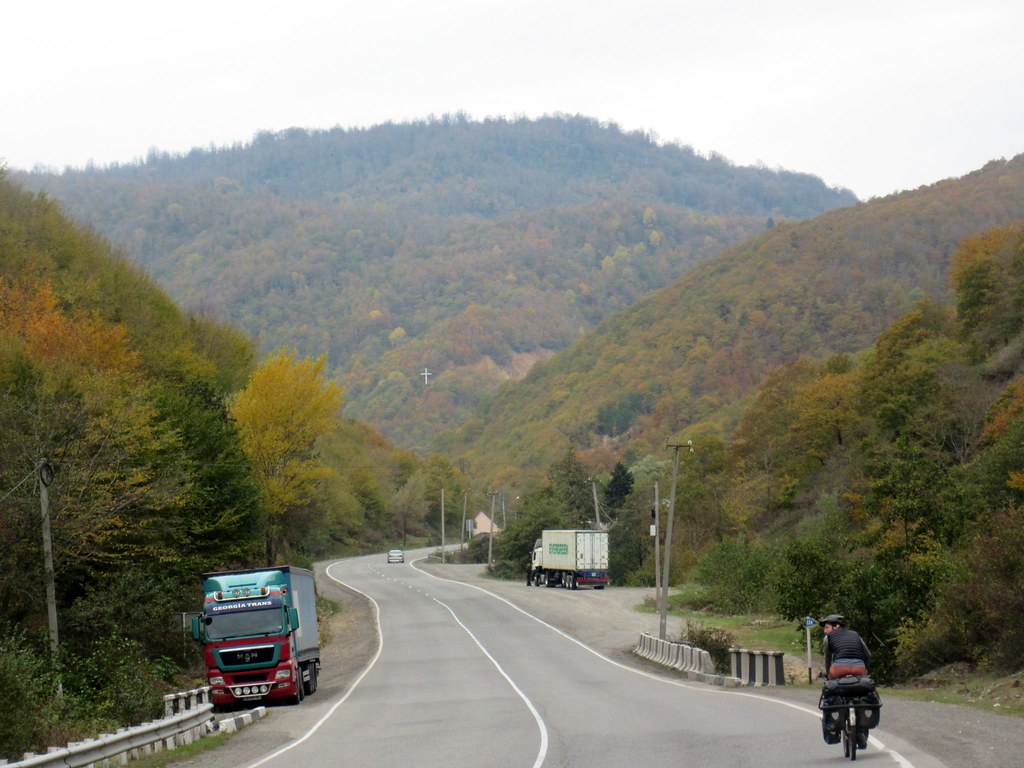 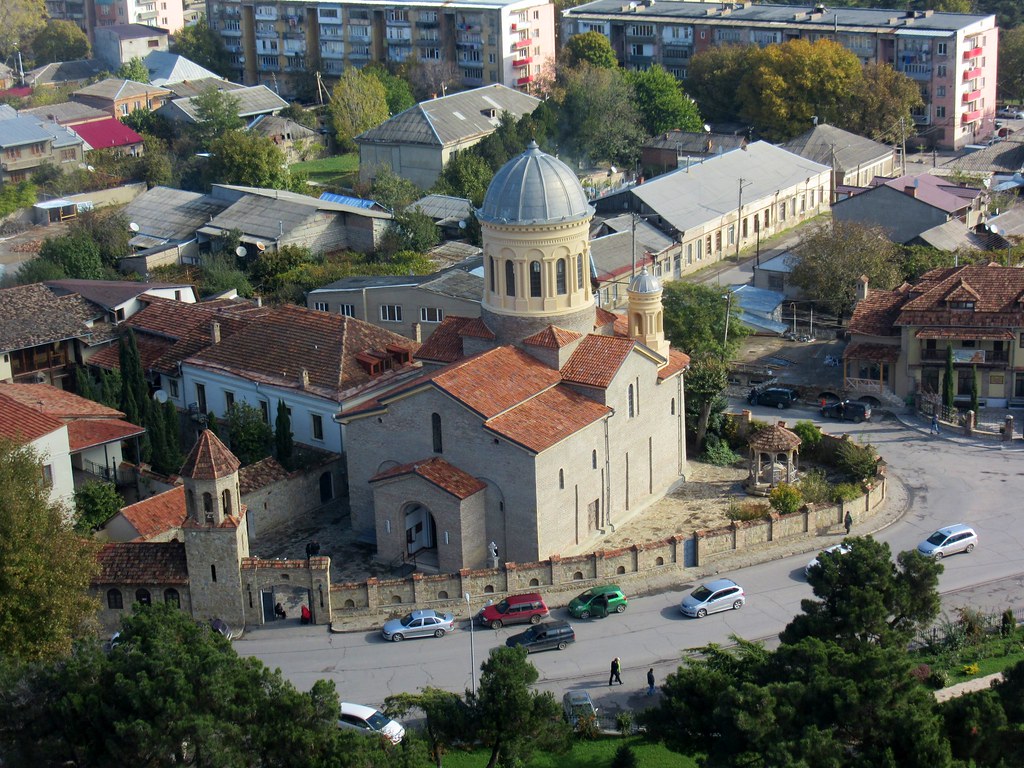 The main cities we stayed in whilst in Georgia were Tbilisi and Batumi, both we mostly had rain for the duration of our stays, but from what we saw we thought the cities were great. A good mix of traditional buildings and new architecture. Easy to walk around and both had a nice feel to them. Batumi I thought was going to be a tacky seaside resort town full of casinos but I think it had a lot to offer and especially on the day we left and cycled along the coast in the sunshine it was really beautiful. 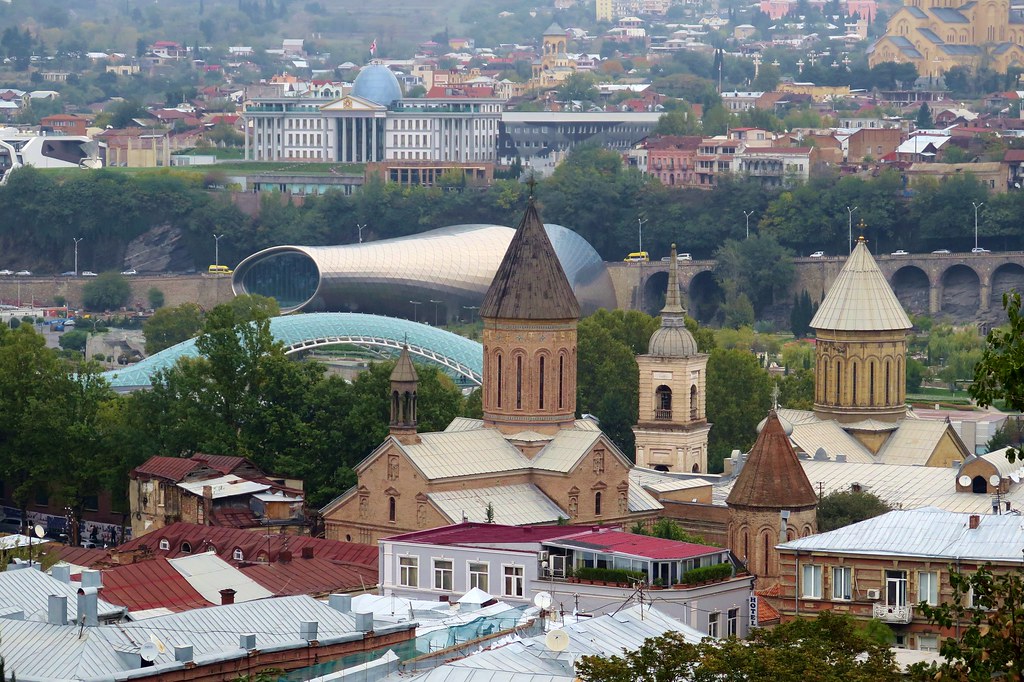 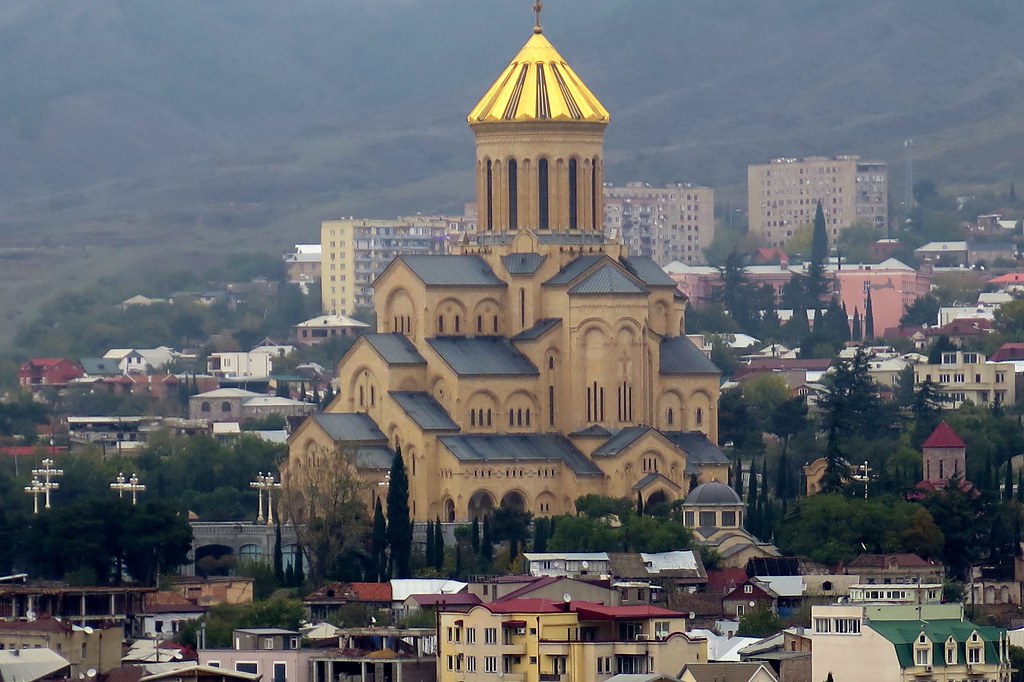 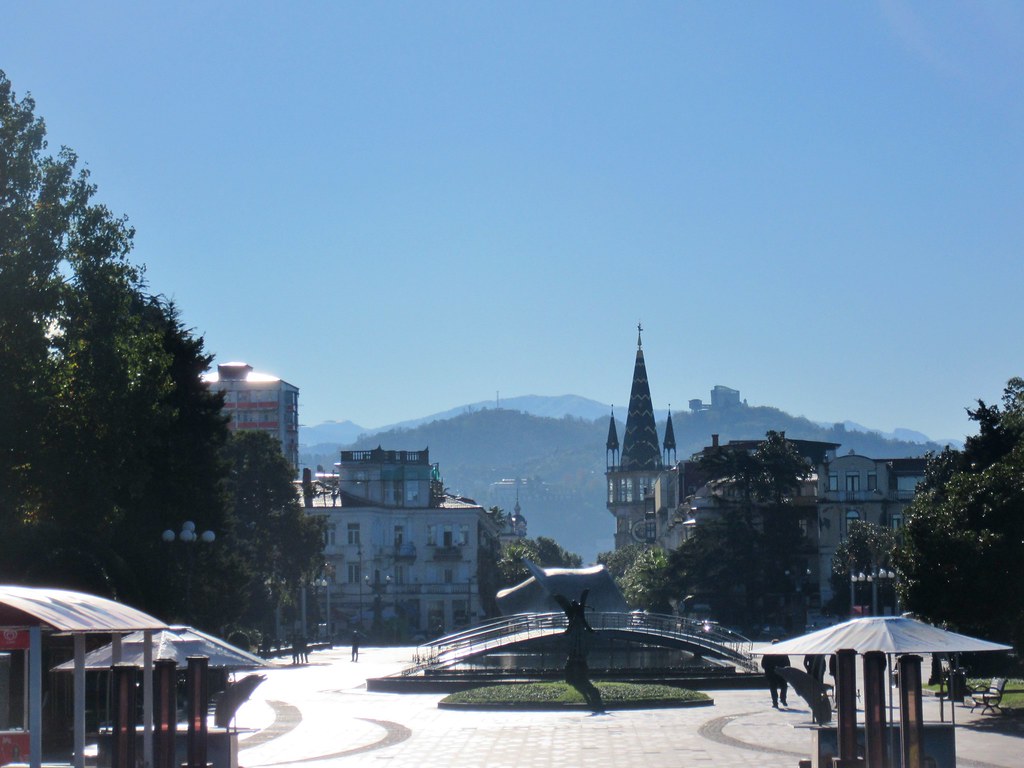 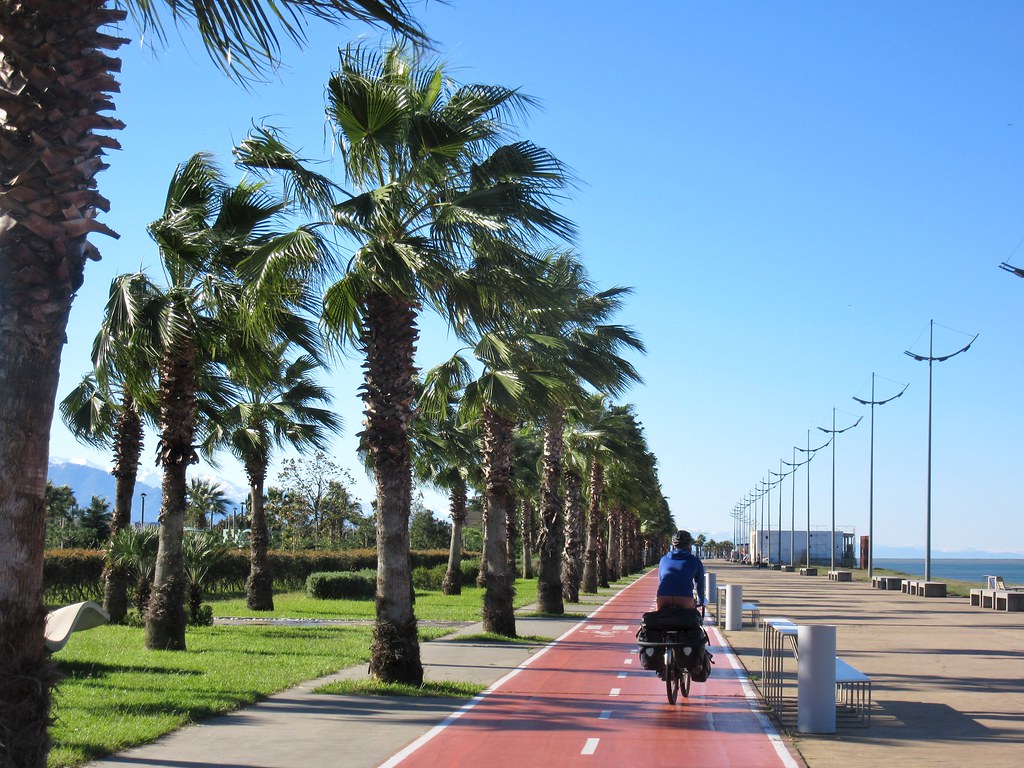 The roads were in good condition but with only one lane and not the widest of shoulders it sometimes wasn’t the funnest with drivers moving quite quickly. People on the whole were good at giving us room but if vehicles were coming in both directions or overtaking it seemed a little close. We had a few tunnels in the last section of Georgia and we were really pleased that they were so well lit. Tunnels are not very fun on a bike but with good lighting they make quite a difference. 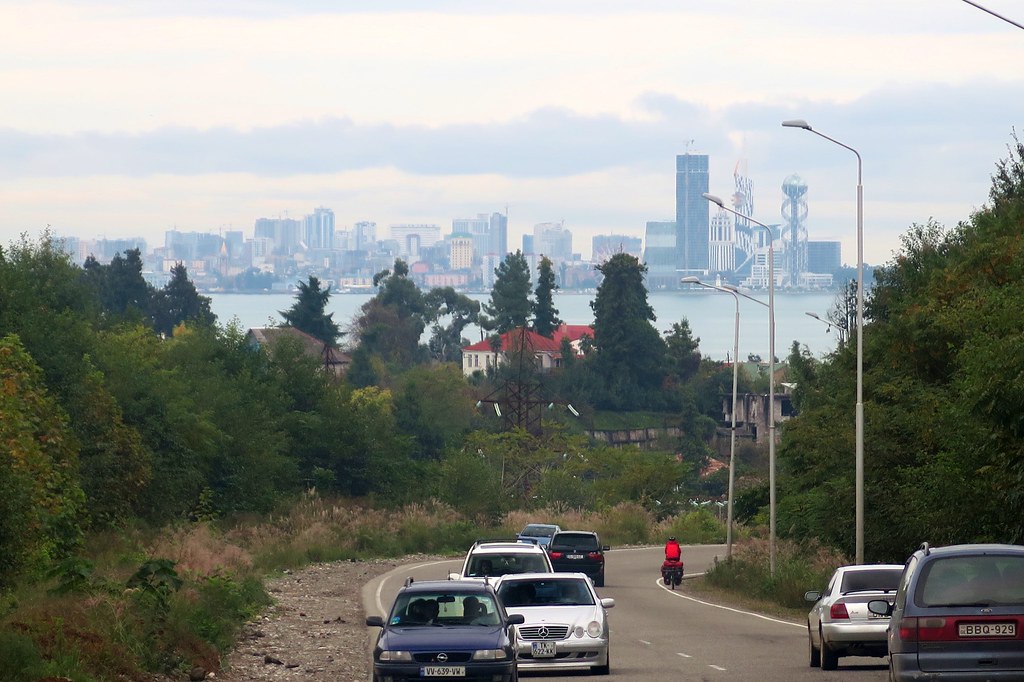 As we rode we encountered a lot more dogs. It seemed just across the border from Azerbaijan there were quite a few that chased us and looked a little more aggressive, as we continued on they were mostly undernourished strays wandering along the road looking for food. Many of them were limping and it was hard to see and do nothing to help. If we had a bit of spare food then sometimes we’d stop to give them something. We also saw so many cute puppies just running up and down the road, again we couldn’t do much to help. Andy wouldn’t let me take them all with us. Even though there seemed to be lots of stray dogs most of them had tags on their ears, if anyone has any ideas why I’d love to know – I couldn’t find anything online. 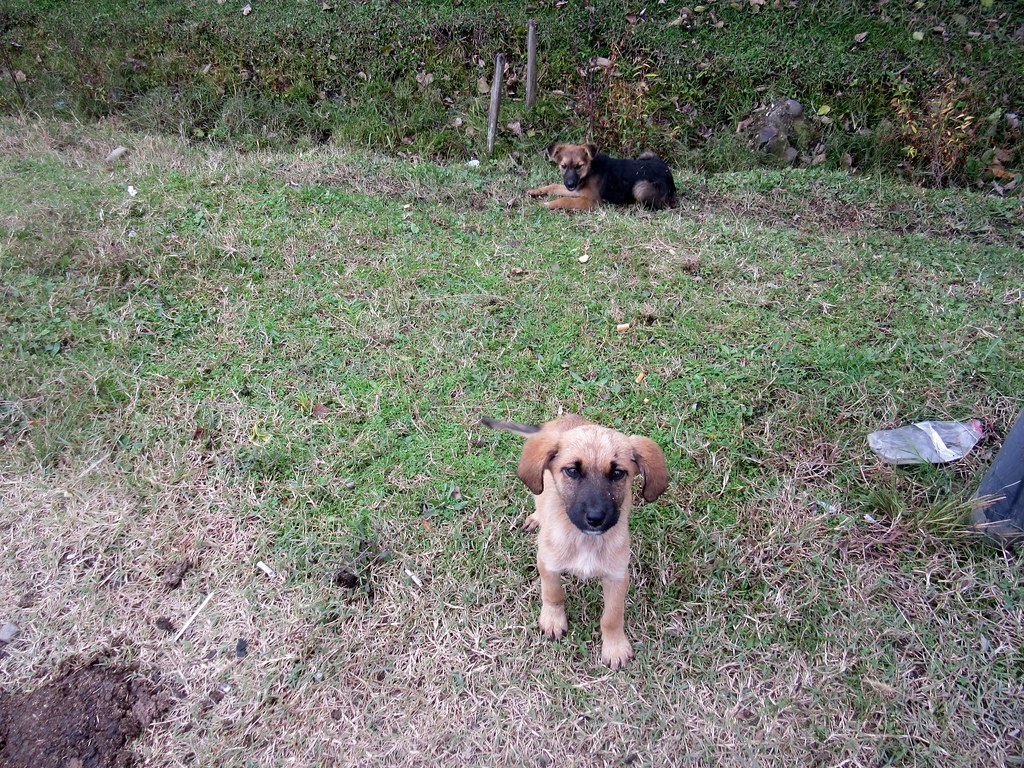 As I mentioned we were in a Christian country where alcohol with most meals seemed the norm and pork was back on the menu. Most people owned some vines and made their own wine, or at least from what we could see. 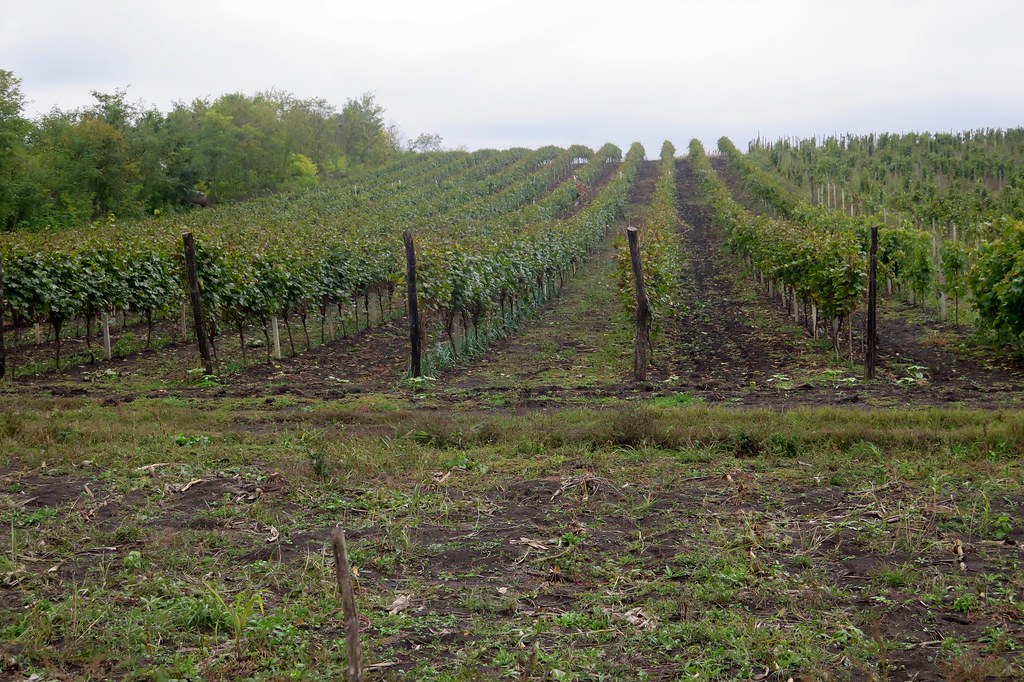 In Georgia they produce many different varieties of grapes different to the classic grapes used in a lot of wine around the world that we are more familiar with. Usually I love dry reds but actually the semi-sweet reds were good and most of what we tried (for research purposes only) were very tasty too. Along with the drinking there were plenty of delicious foods to try too. Many of which were extremely rich and high in fats. Cheesy breads, cheesy vegetables, cheeses, and to counterbalance, lots of salad…with mayonnaise. Lots of delicious grilled meats, including pork after a long period of it not being on the menu. There were plenty of tasty fruits and vegetables too, but the effects of this diet meant we did see quite a few larger people in Georgia, and maybe we left with a few extra pounds on the waists! 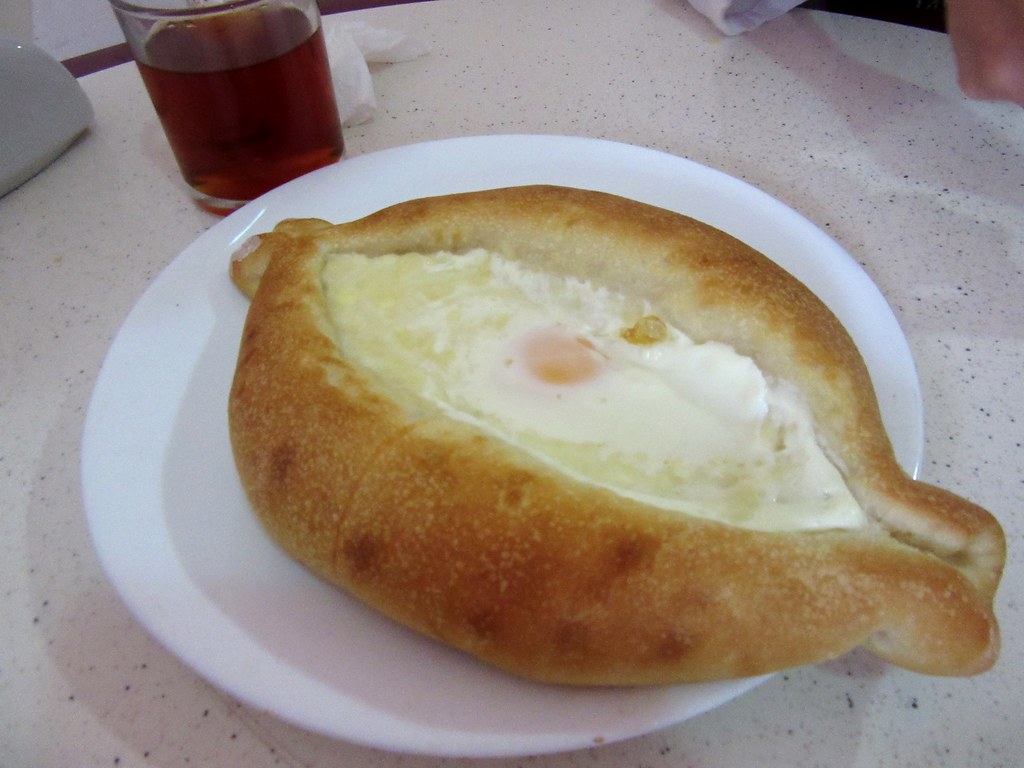 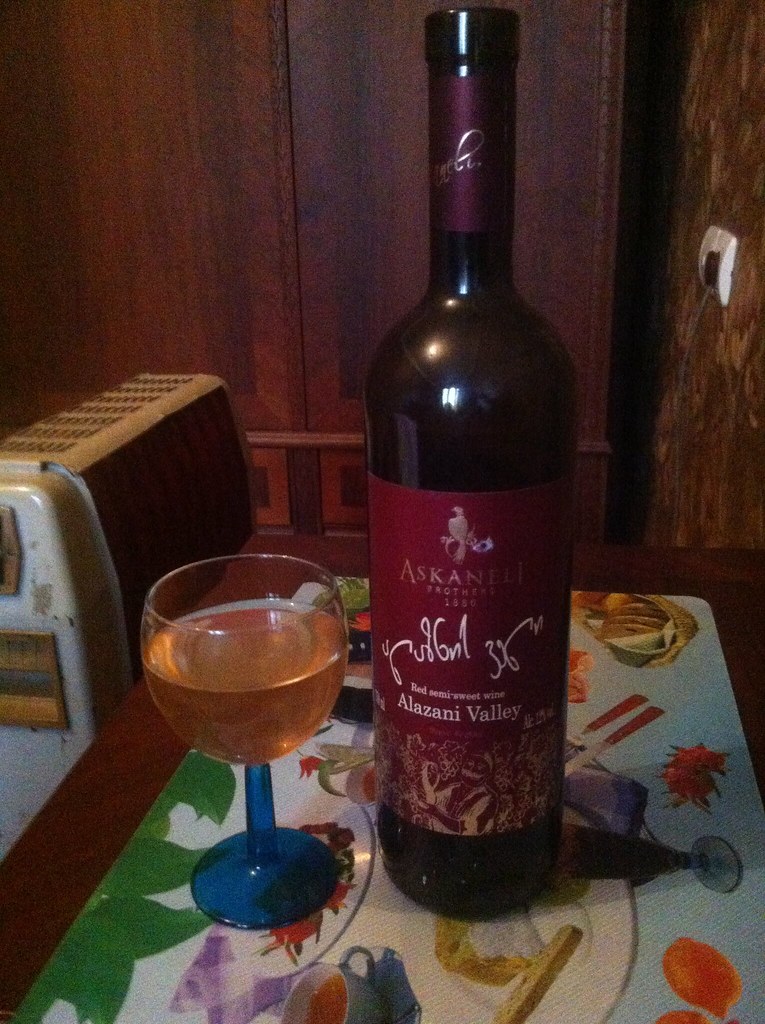 As you may be able to tell from the summary we had a wonderful time in Georgia and somewhere I would love to come back to and do some hiking in the mountains. It had a lot to offer and was a really affordable place for a developed country. The only negative was that with the drinking culture (especially after being in many Muslim countries) there were far more drunk people in the day time, in comparison (maybe I need to get used to that going back to the UK). It was something I thought about when on the roads, not that we saw any accidents or much swerving, but we put our trust in others on the road every day so it is a worry sometimes when alcohol is involved.

Highlight – Sighnaghi, the beautiful town in the mountains. Again sadly the weather wasn’t brilliant but we did have a small restbite when we could see out to the Caucausus mountains. We’d hit 15,000 km (a massive achievement) that day, got to the town and been given a carafe of wine on arrival. The night view was stunning down to the towns below and the church was lit up. A very stunning little town. 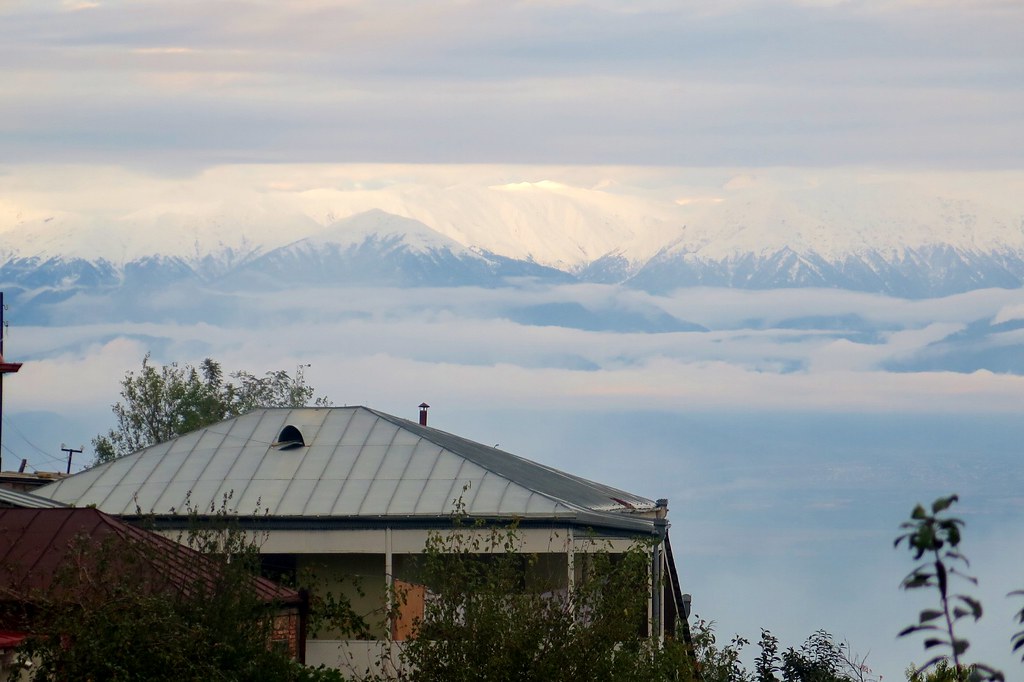 Lowlight – As I’ve gone on and on about it already, but the weather. The day it snowed and we were told it was the coldest October day on record, weren’t we lucky (in an extremely sarcastic tone for those who don’t know me). The only other thing was the litter at the sides of the roads. I guess maybe it has been too long since we were in the UK as I’ll probably be shocked at how much there is there too. Being on a bike you see so much more. 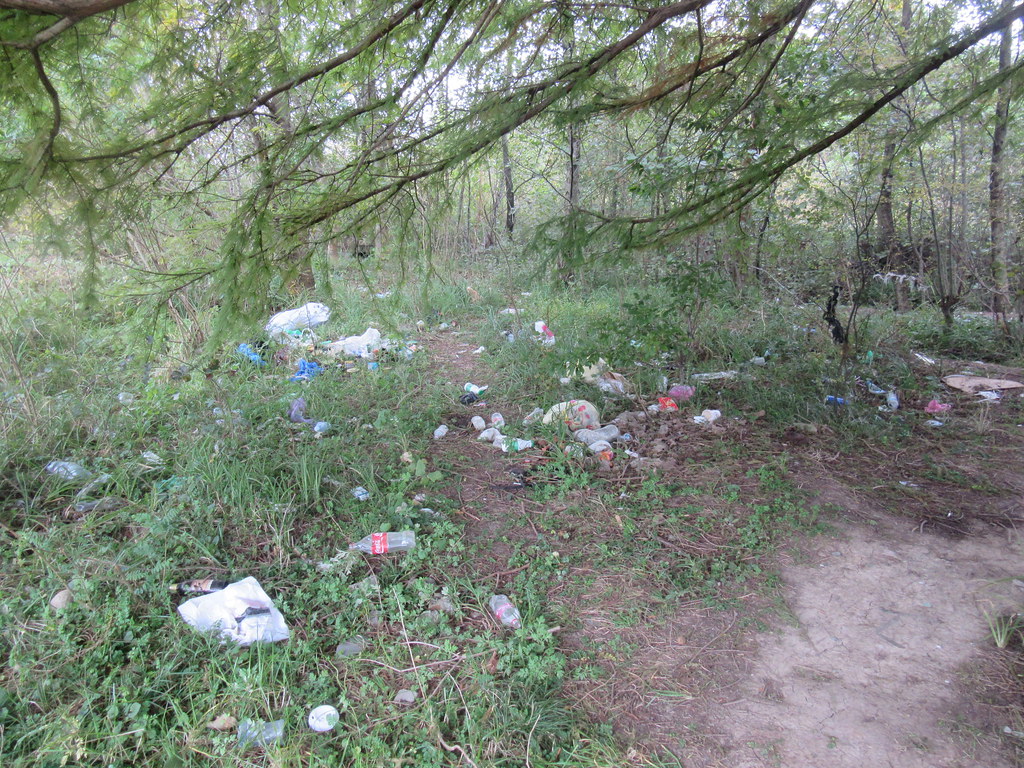 One thought on “Georgia Summary”