We both have 26” Surly Long Haul Truckers which we’ve been riding for the past 3 years. They seem to be a very common choice for cycle tourists, for good reason. We bought them online from the UK and had them sent out here. At the time, the Yen was very strong against the Pound, so even with shipping, this was cheaper than buying here in Japan. We had them assembled at ‘Sams Bike’, a great bike shop in Sapporo. (I would post a link, but they don’t have a website!) 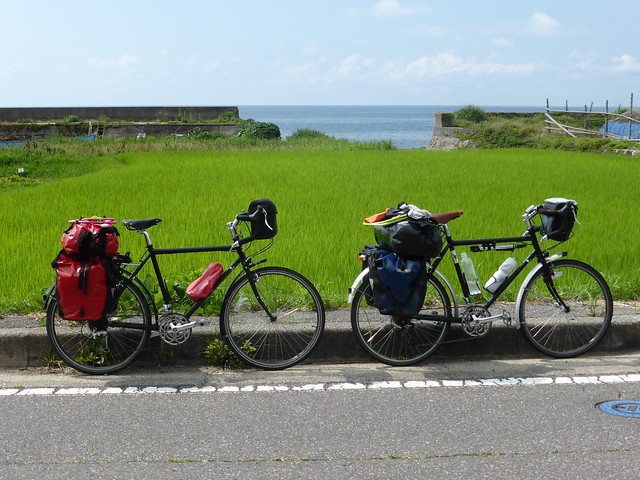 Our bikes. Loaded for summer touring, so minus the front racks and panniers.

They’re the 2012 model which we’ve kept almost entirely with the standard components. We upgraded to the classic Brooks B17 saddle which our backsides both seem to get on with far better than any other saddles we’ve used in the past. We will give them an overhaul just before we leave with new tyres (Schwalbe, of course), brakepads, chain etc so that we’re not setting off with anything that’ll wear out too soon. 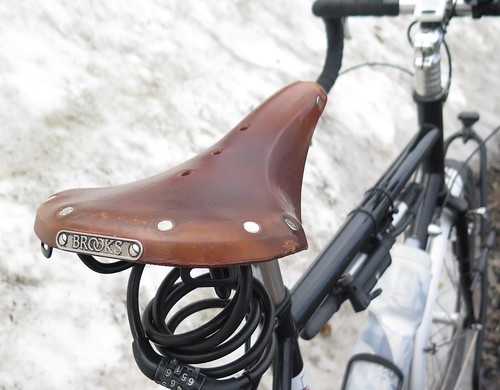 We’ve set them up with the Surly ‘Nice Rack’ rear rack, mainly for the name, and also the Tubus Tara front rack. We also fitted SKS Trekking mudguards. For panniers, we went for the tried and tested Ortlieb Roller Classics front and rear, plus the Rear Rackpack and Ultimate 6 Handlebar bag.

Not a particularly imaginative touring rig but in my experience, cycle tourists are serious about their gear, so if something is popular, it is probably popular for a reason. So far, for us, everything has lived up to expectations.

The MSR vs Hilleberg tent debate was eventually won by MSR in the shape of the 3 man Mutha Hubba HP. The size of a 3 man tent with increased vestibule and interior room is well worth the extra grams in our opinion. The MSR can also be pitched on hard ground without the need for pegs which gave it the edge over the Hilleberg options. The ‘HP’ is the slightly upgraded model, which is lighter weight and also warmer.

Recent edit – For the first section of the trip in Japan, we’ll be trialling a Mont-bell Stellaridge 2 tent. It was kindly supplied to us by Mont-bell so we’re keen to use it. It’s a two man tent so slightly smaller than we are used to, but in Japan we won’t have any security concerns with leaving our panniers outside. It’s super lightweight and we want to see if the weight savings are worth the sacrifice of space. We’ve sent our MSR tent ahead, so will revert to using that if we decide we need more room. 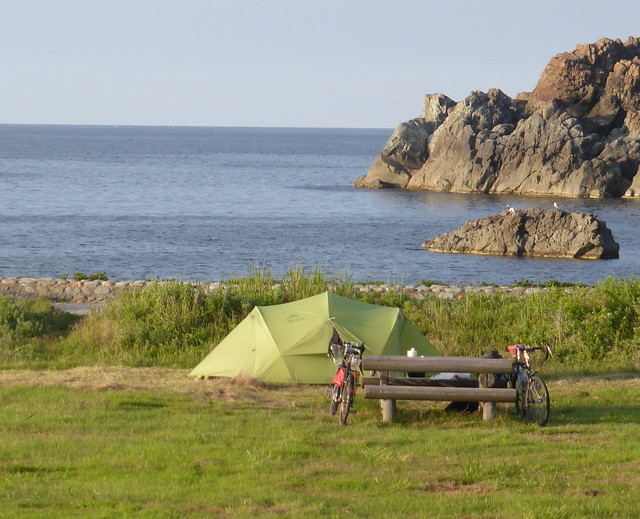 Andy has the Cumulus Mysterious Traveller 650 sleeping bag. Rated down to -12. Clare has the slightly warmer Cumulus Mysterious Traveller 750 which is good down to -16. The zips are on opposite sides so can be zipped together, and we’ll also be using Macpac silk bag liners. We both have Thermarest Prolite sleeping mats plus the additional chair conversion kit which turns them into comfortable seats with a backrest. 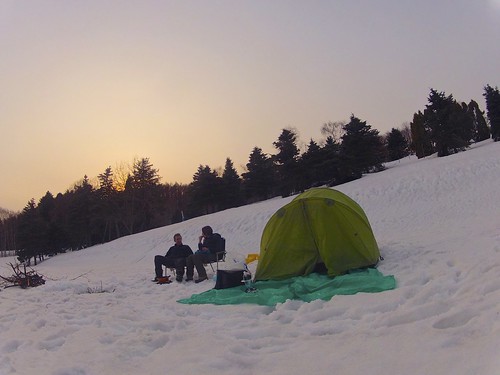 Although we’ve planned our route to avoid the coldest weather, we will still have some very chilly nights in Central Asia and Eastern Europe. We have used our gear camping in the snow here in Hokkaido, so it’s good to know that it’ll stand up to low temperatures if necessary.

Again, we went with MSR for our kitchen. The Whisperlite International stove can use a range of different fuels and is light and reliable. We have an MSR cookset comprising a couple of pans, plates and mugs which is more than adequate for us. Other cutlery and bits and pieces has just been pieced together from various outdoor shops and 100 Yen shops. 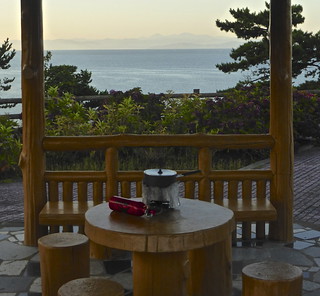 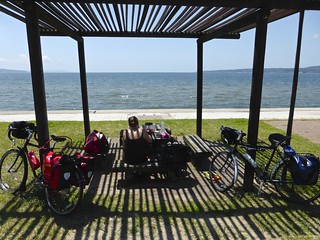 I initially had written that all our clothing will be pieced together and involve a lot of tatty old shorts and ski logo tshirts. However, just before we set off, we applied for Mont-bell‘s ‘Challenge Support Programme.’ They came back to us and offered us some product support towards our clothing for the trip. So, we’ll be wearing mostly brand new gear from Mont-bell which’ll be keeping us dry, warm and stylish. (Good enough plug?)

We’ll also be bringing with us tools and spares for when things invariably go wrong or break on the road.

We’ll have a small notepad computer, a Canon camera each, a Kindle or two and will try to pick up an unlocked smartphone so we can use local SIM cards where possible to have a means of communication on the road.

Fortunately we have had most of this gear for a couple of years now so we are confident that it does the job, and we are familiar with it. Packing everything for this length of tour will be a challenge, but we can be quite ruthless when it comes to packing light. Some big climbs in the Japan Alps in the first stages of the trip will no doubt help us prioritise what is necessary and what extra weight can be left behind!