Not many people know much about Albania, us included. Hopefully we know a bit more now! We had been told that it would pretty different to the Europe we know and had just come from. And we felt the change almost straight away as we crossed the border. It was absolutely stunning where we crossed over, and the people, the buildings, the roads were all different. We were given a great first impression though as so many people said hello, in English, the area was beautiful with a lot of rivers and lakes in the first 30-40 kms. Of course it always helps when the sun is shining too, which it was. Then getting into Sarande the owner of the hotel we stayed in was super friendly and welcoming, the port area was nice and it was just a great start. 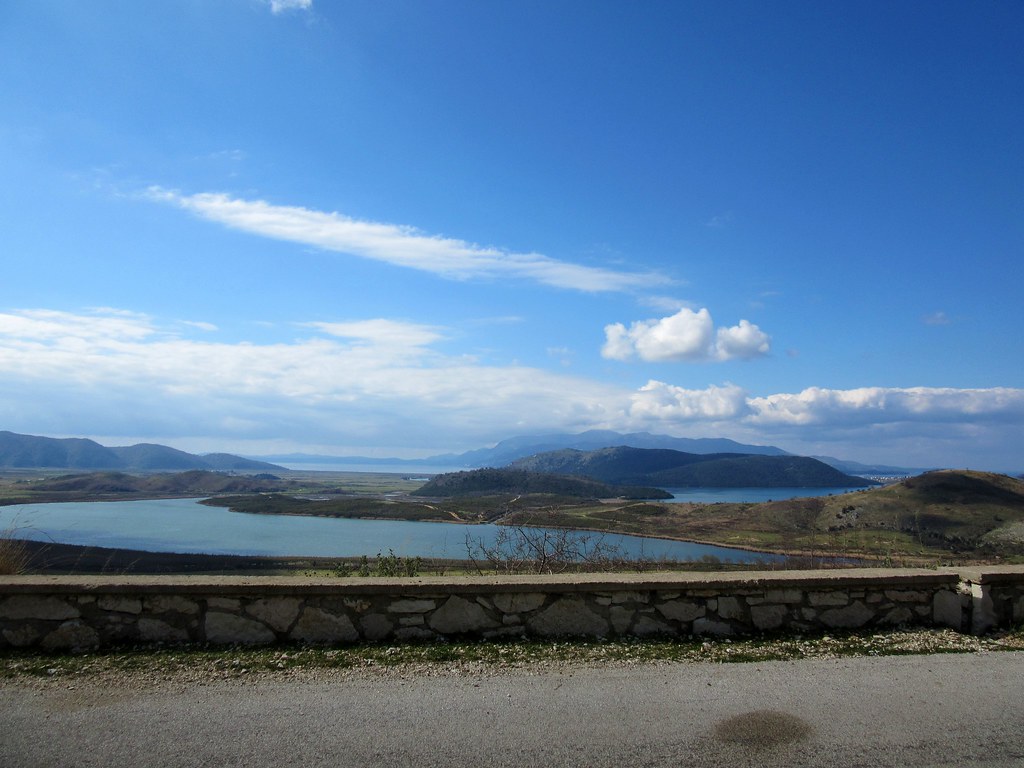 It wasn’t all beautiful and fun though, once past Vlores the mountainous area became very flat. Lots of cars travelling fast on roads without much of a hard shoulder. I was definitely glad when we got to Durres and didn’t have to cycle any more. We’d seen too many close calls with cars to feel safe and, as always, you have to put your faith in others to be careful, but that was hard here. I’d say trucks always tried to give us more room, but cars didn’t seem to move out much. We saw a lot more road kill on the roads to remind us of the dangers! Before Vlores in the mountains it was much quieter and people were far more courteous on the roads making for a much more pleasant experience. 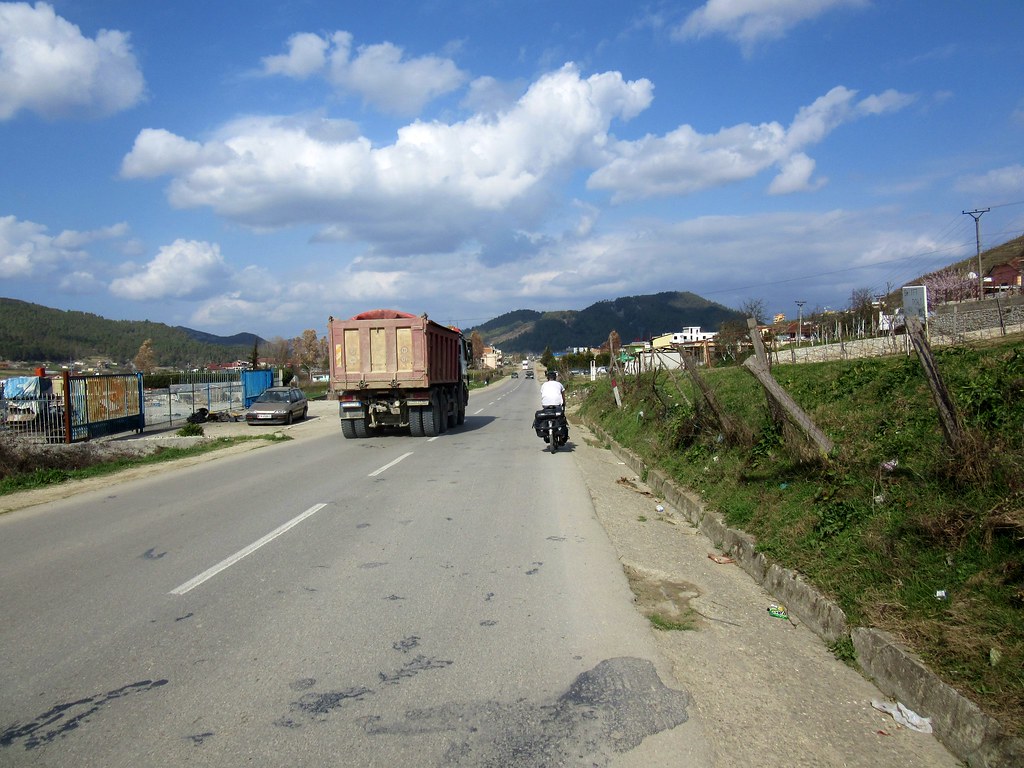 If we were cycling through Albania at a slightly later time of year we would have stayed in the mountains through the centre of the country. The first few days we did to Vlores were brilliant, hard cycling with some of the gradients but the rewards were worth it. Being on the coast was that bit warmer and with rain forecast we thought it was the safest bet. 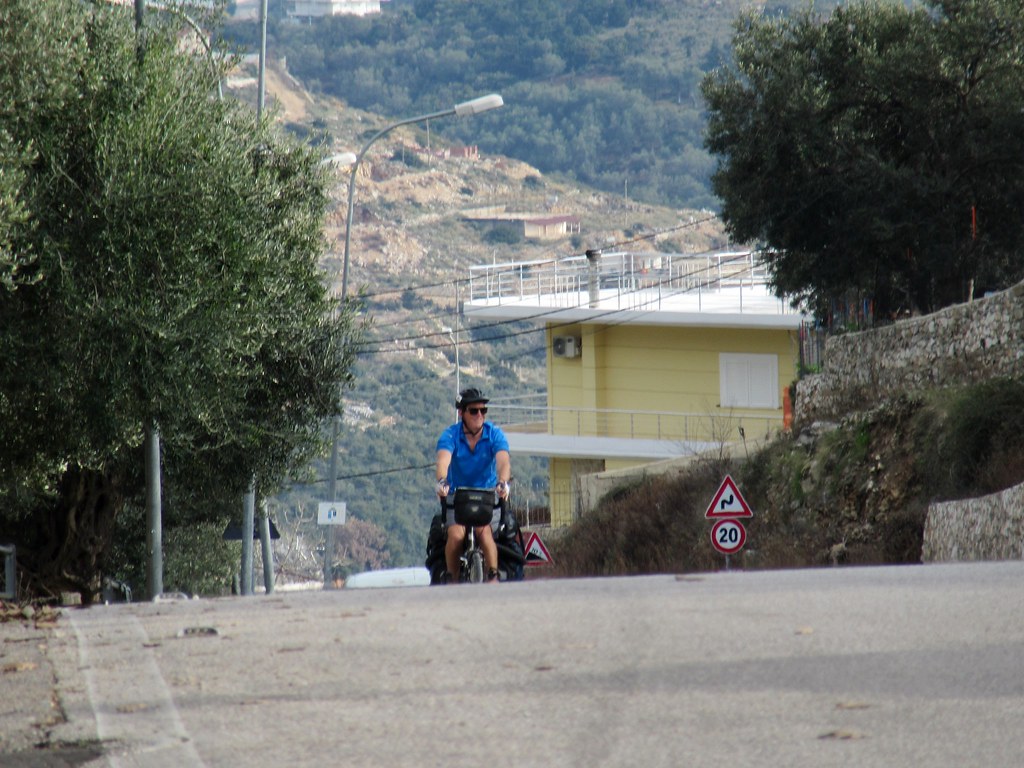 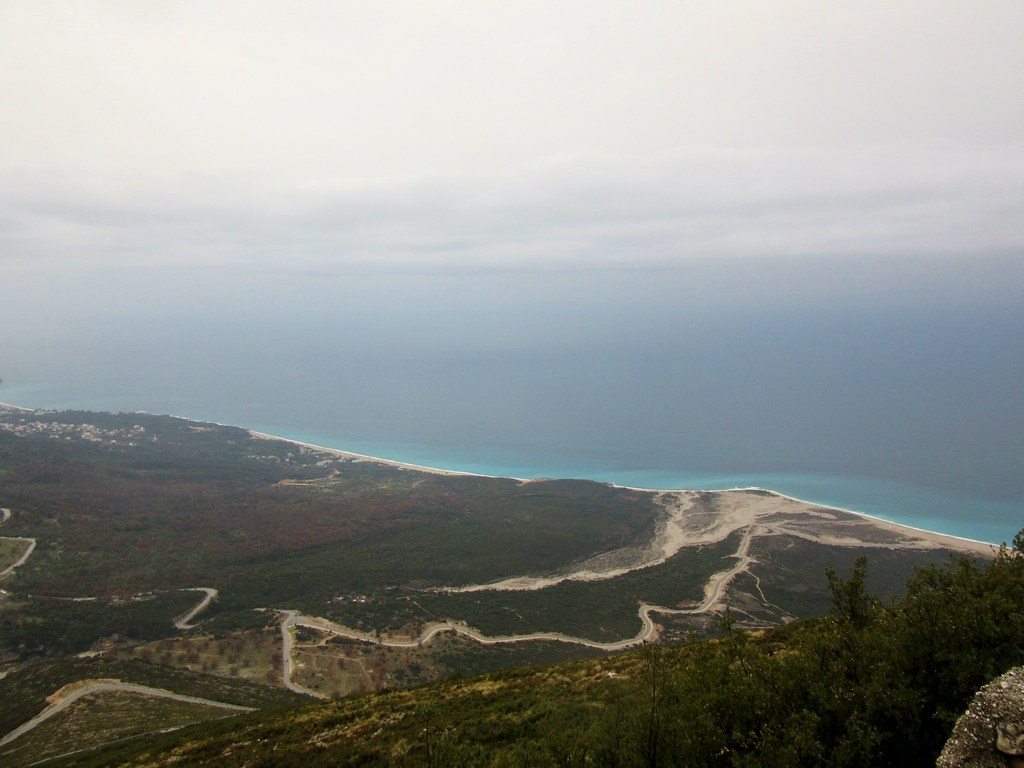 We definitely enjoyed our time in Albania and are very glad we cycled there. I really loved Tirana and had a great birthday celebrating. It’s always nice to have some time off the bikes and be tourists in a city. It has a lot to offer. I would have happily stayed there for another few days. Again it helped that we had gorgeous weather and could sit out in the sunshine. 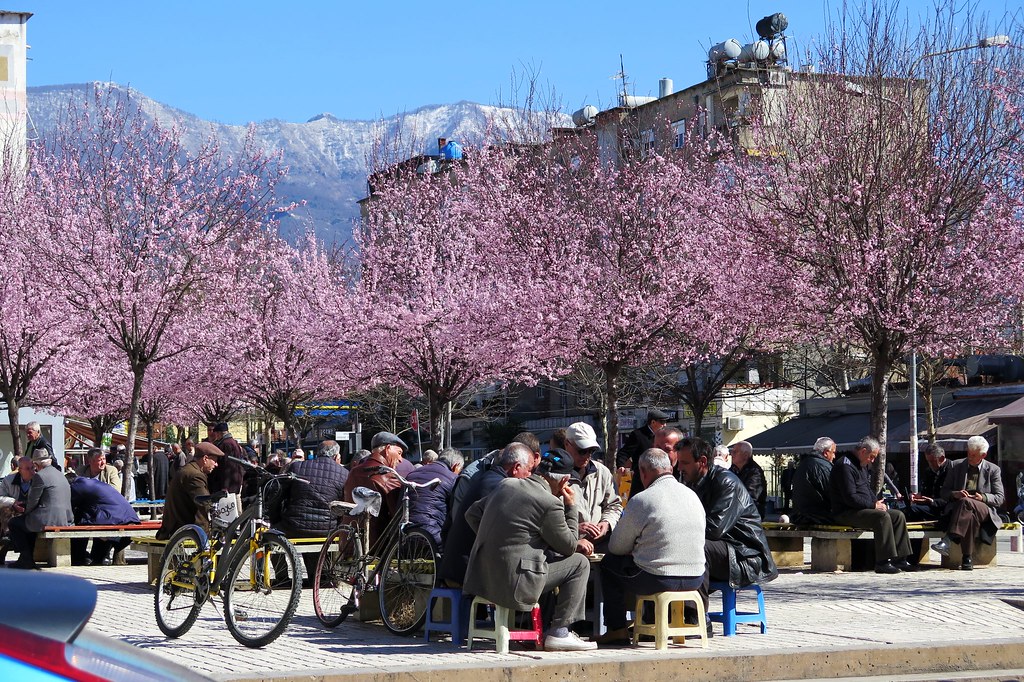 We also enjoyed our last couple of days in Durres. We’d had many frienly interactions in Albania but for some reason in Durres everyone we came into contact with was lovely and kind, especially our last hotel owner, Sabrina, making us coffee, pastries and trying to ply us with raki (the local spirit). It was a great way to finish our time in Albania. 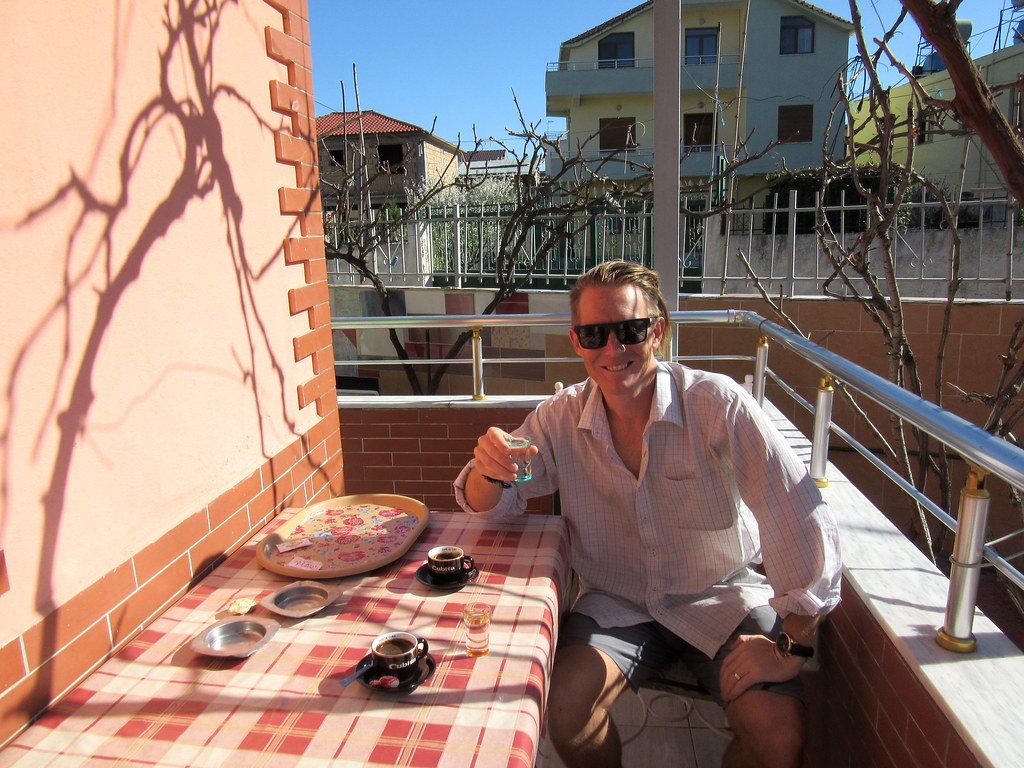 Going back to the differences between other European countries and Albania, it was like we had stepped back in time a little. The buildings were so mixed, you could see things were changing in the cities with big new apartment blocks being constructed and next to them old dilapidated blocks. 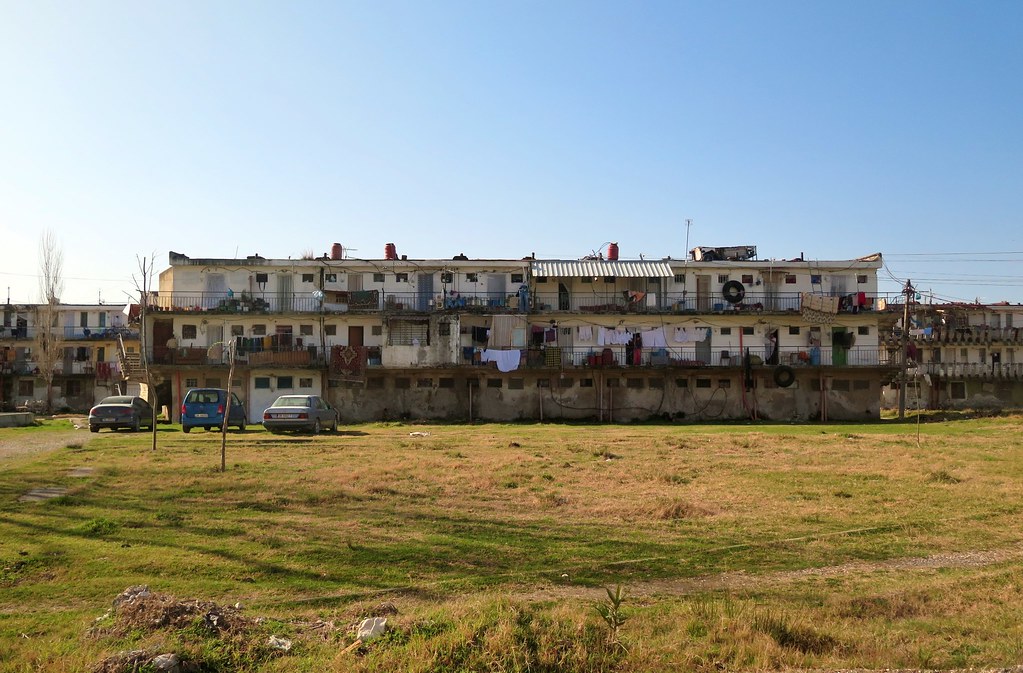 Also we had noticed cuddly toys hanging from houses or businesses, it looked quite sinister! I finally had a chance to google what it was for, I found an article about how it was to ward off the evil eye. Even though we saw loads of them I didn’t manage to take a picture, but here is a link to the article with pictures (http://www.bbc.com/news/magazine-33718522). The cars (apart from the masses of luxury cars in Tirana) were old and noisy with lost of smoke coming out of their exhausts, not always great to be in the firing line inhaling a lot of this. The prices of food, rooms, everything was so much cheaper than in Greece it made it very affordable to be there, we made the most of the accommodation prices and only camped twice. The roads in some parts were in need of repairs but there were also many new roads recently built. 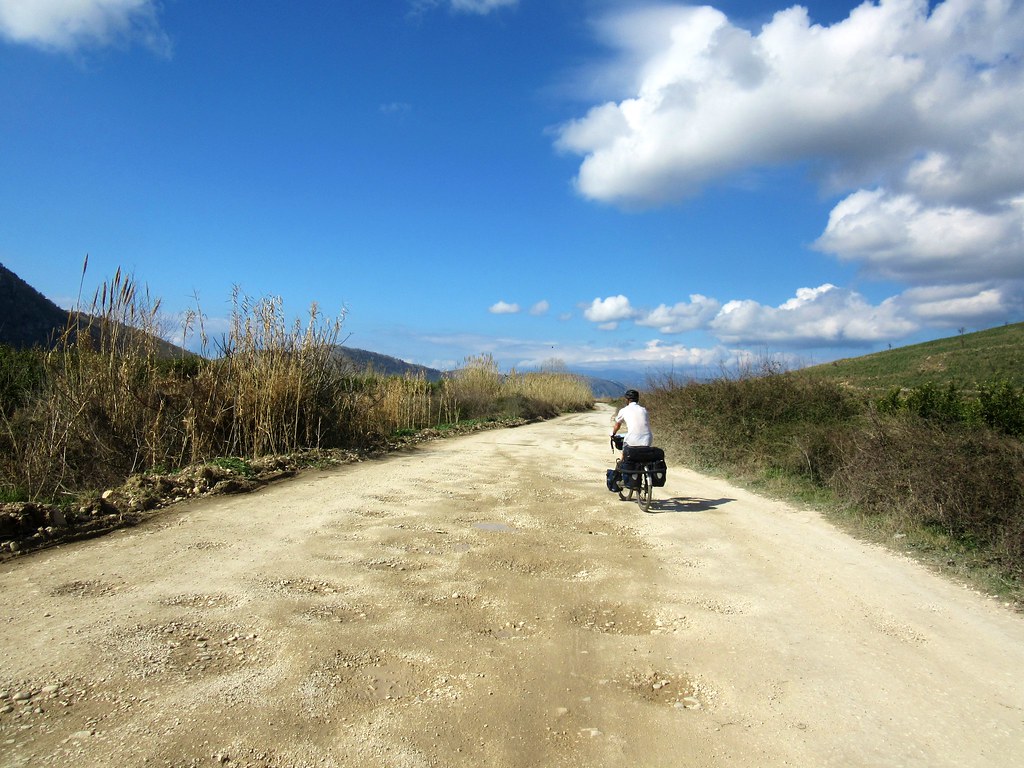 A large percentage of the land was being used for farming arable and pastoral, it seemed that most of this was farmed for local people themselves rather than commercial farming. Also even though there were plenty of rubbish facilities we saw far more rubbish on the land than in many previous countries, always sad to see as it ruins the environment and is a real eyesore.

Albania has had a tough past becoming Independent in 1912 only to be occupied by Italy in 1939. There are old Communist bunkers scattered throughout the country reminding us of their past. In total there were approximately 173,371 built. 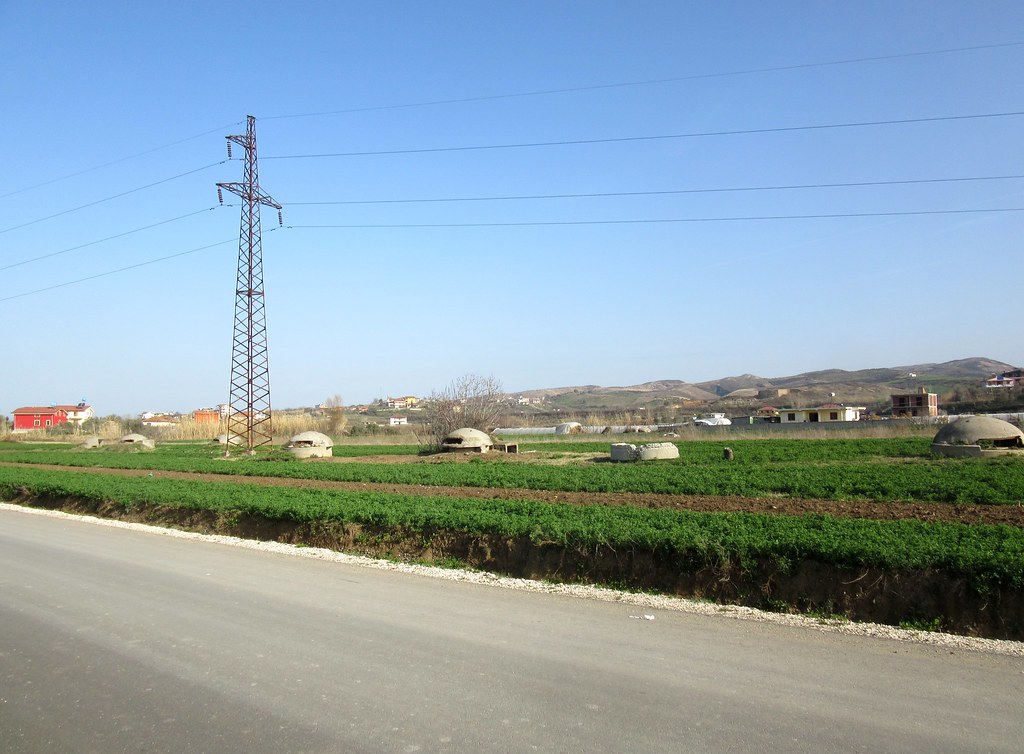 Today you can definitely see the influences from the countries around Albania or other counties which occupied Albania from it’s long history when it was claimed or occupied by Ancient Greece, Romans and Ottoman Turks all leaving their mark on the country. Some of this influence is seen in the food available, pizza, pasta and wine from Italy, gyros and Baklava from Greece, etc etc. We had some excellent meals in Albania, including delicious seafood. Usually with a meal you would be given a fruit platter afterwards on the house, and frequently bread and dips. I don’t think we had any disappointing meals at all. 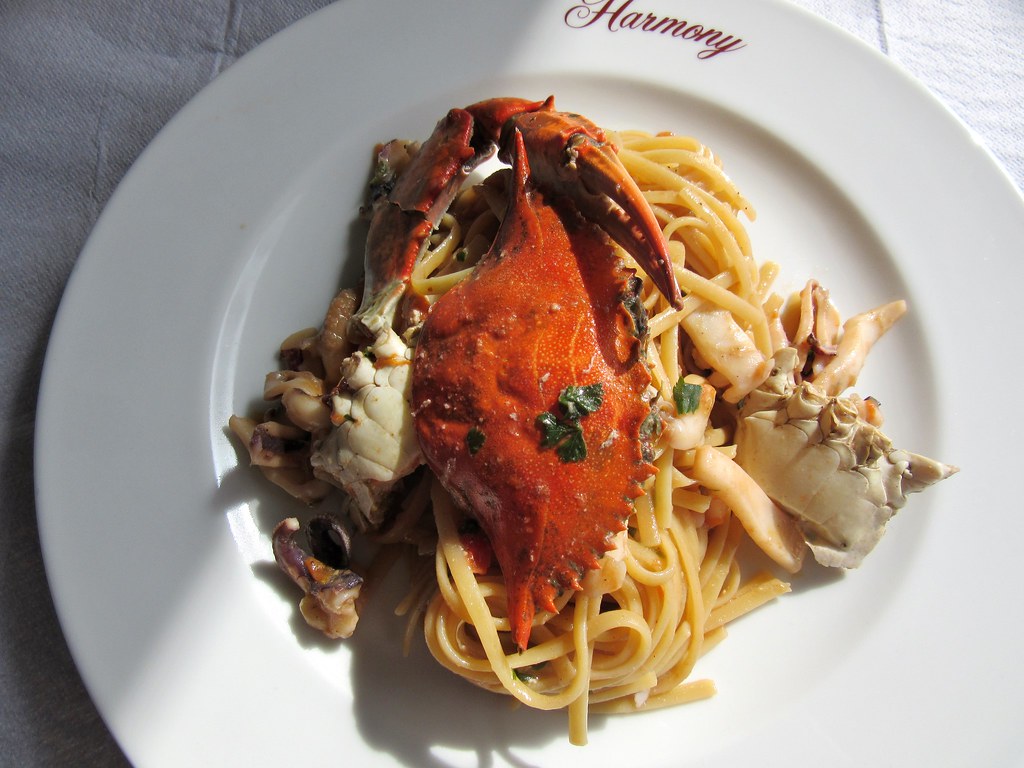 One thing there was an abundance of was cafe/bars. You would always see people sitting outside drinking coffee. Along with this it seemed they would also double up as betting shops. Considering Albania adheres to Islam with the majority of the population following the religion we were surprised to see this. In comparison to the numbers of mosques we had seen, and heard, in Turkey we didn’t see too many. There seemed to be more churches and cathedrals, again demonstrating the influences from years gone by. 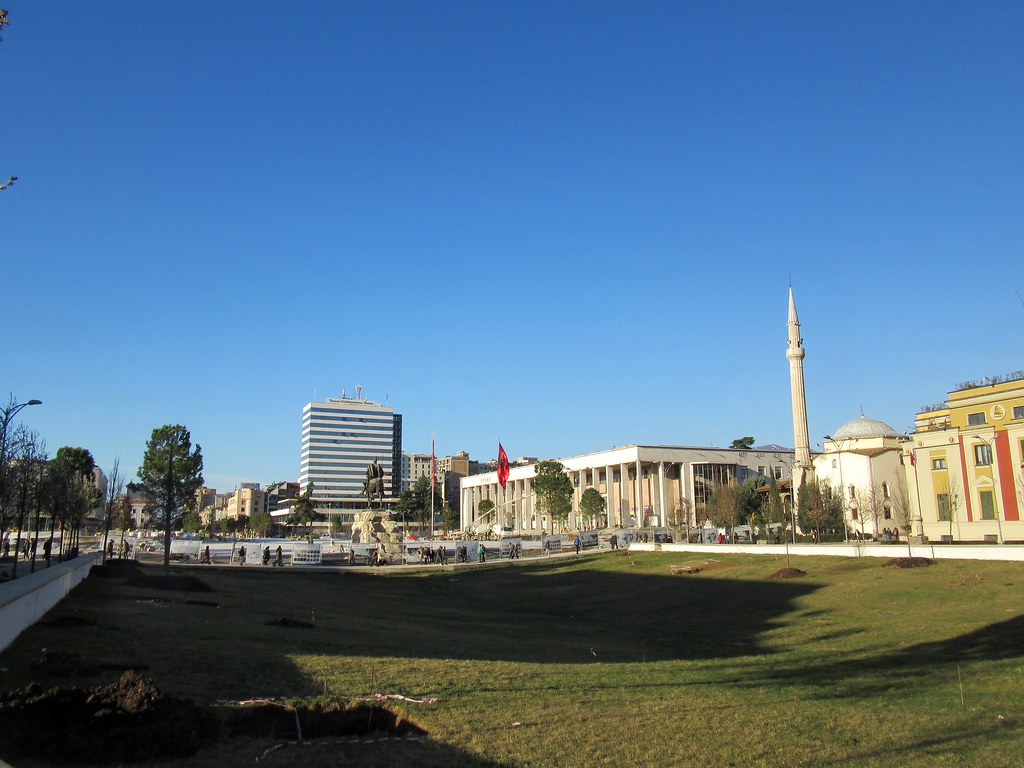 Overall we did enjoy our short time in Albania and would recommend the south for beauty and Tirana for a city break. It was a great opportunity to see a country I don’t think we would automatically think of going to, that’s the great thing about cycle touring and trying to connect the countries together. The people we came into contact with were really lovely and it was an interesting place to visit. 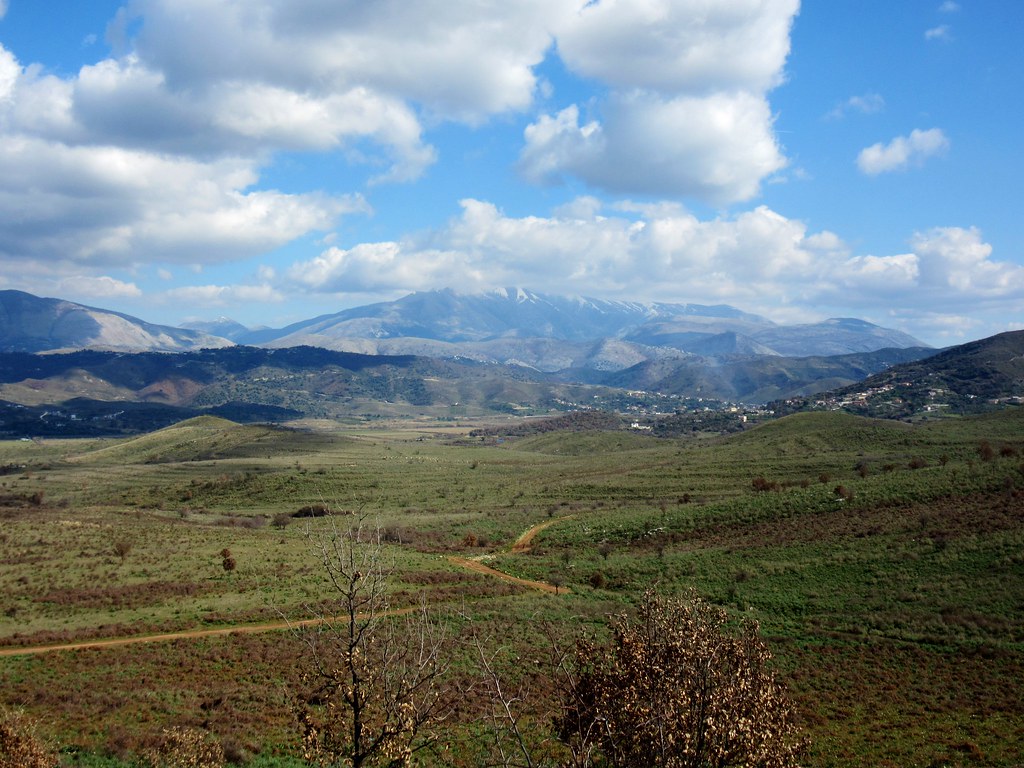 The highlight, Tirana. It was a diverse and interesting city. Great places to eat and drink. The cable car we took up Mt. Dajti gave us a stunning view over the city and out to the sea. It was a great 4 days. 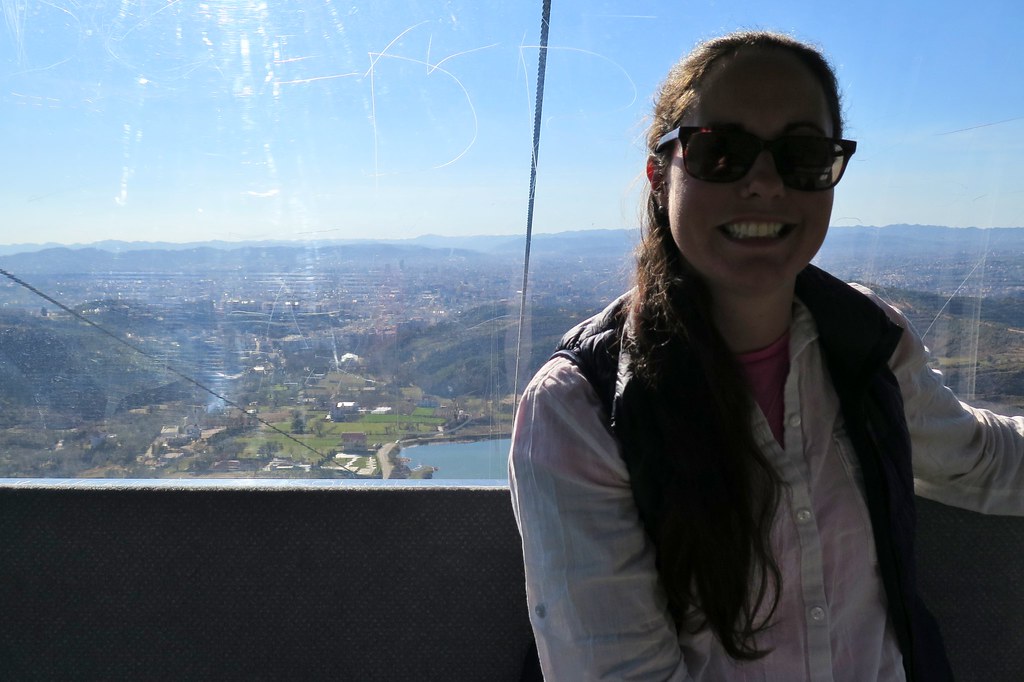 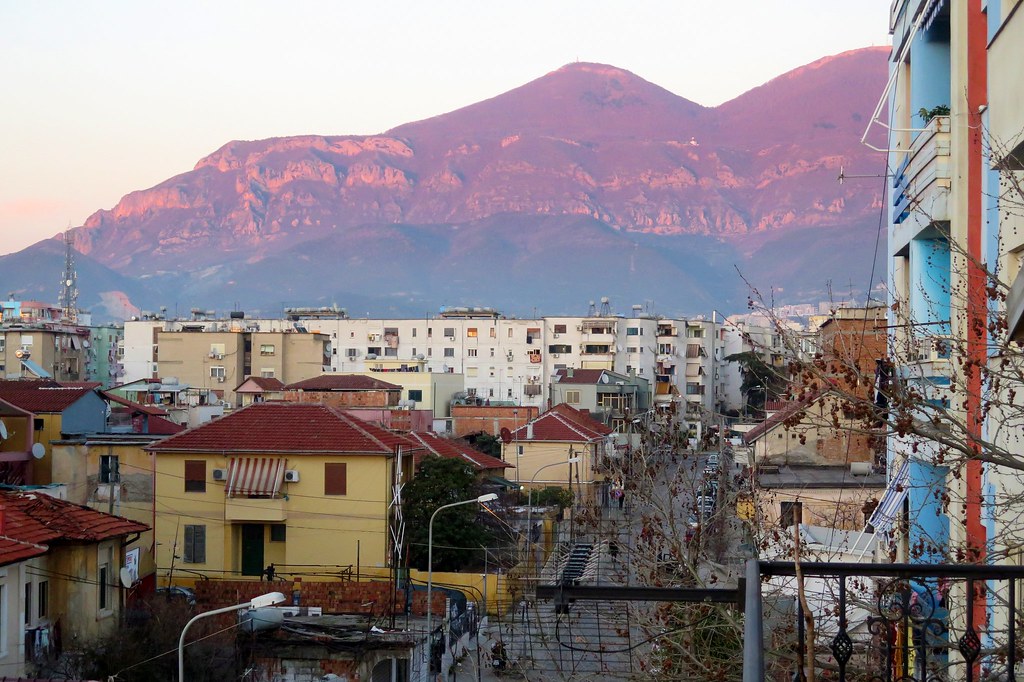 The lowlight, Tirana, well not really but it happened in Tirana. Just one small thing really, we ordered two beers, asked for the cheque, the waiter said 500 Lek (£3.20), I questioned it but Andy had already paid (it’s usually 400 Lek max and they were 2 small bottles). I asked for a receipt, he said the machine was broken and walked off. I found a menu and saw it should have been 360 Lek, so went to find him. Basically he knew he was trying to pull a fast one and was a bit embarrassed he’d been caught. No it’s not a lot of money but it frustrates me getting ripped off. So that and the busy roads with crazy driving

Where we slept – Camping – 2 nights