We were lucky with the timing of our rest day in Kazarman. On our first night there we had thunderstorms and heavy rain, but with a roof over our heads, we slept soundly. We didn’t do much on our day off (not that there’s anything to do in Kazarman) but we raided the few shops in town for food supplies as we’d heard that the next few days would be quite remote. We were heading towards Osh, on yet more dirt roads and over another 3,000m pass. 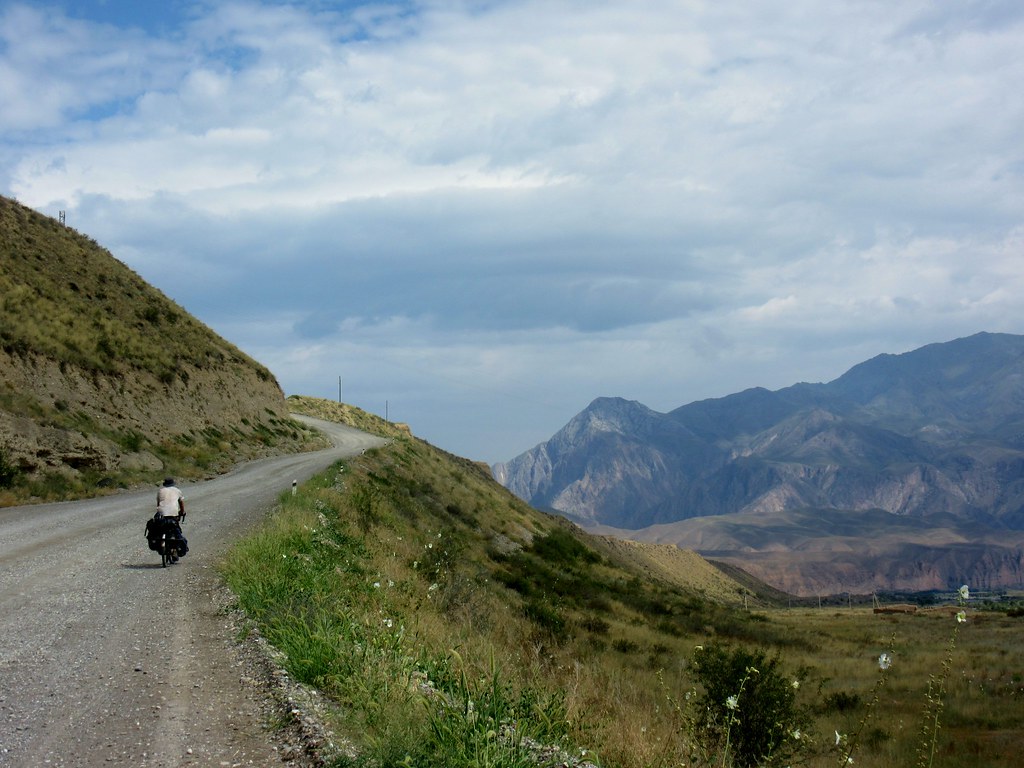 From Kazarman we continued to the west, through some quite major roadworks for the first 20km. More by luck than judgement, we took the right road towards Jalalabad, it’s not signposted and we’ve heard of more than one cyclist missing the turn off. We only had a short day planned, taking us to the foot of the Kaldama pass, where we’d camp for the night. We hadn’t realised the road would be climbing for most of the day though. The rolling hills we rode through were deceptively steep and we reached around 2,000m by the time we got to the river crossing. All good though, it meant less climbing for the next day. We pitched our tent on a hairpin bend next to the river near some farmers’ yurts. They came over to say hello and watch us as we set up and cooked dinner, but they had no problem with us being there. 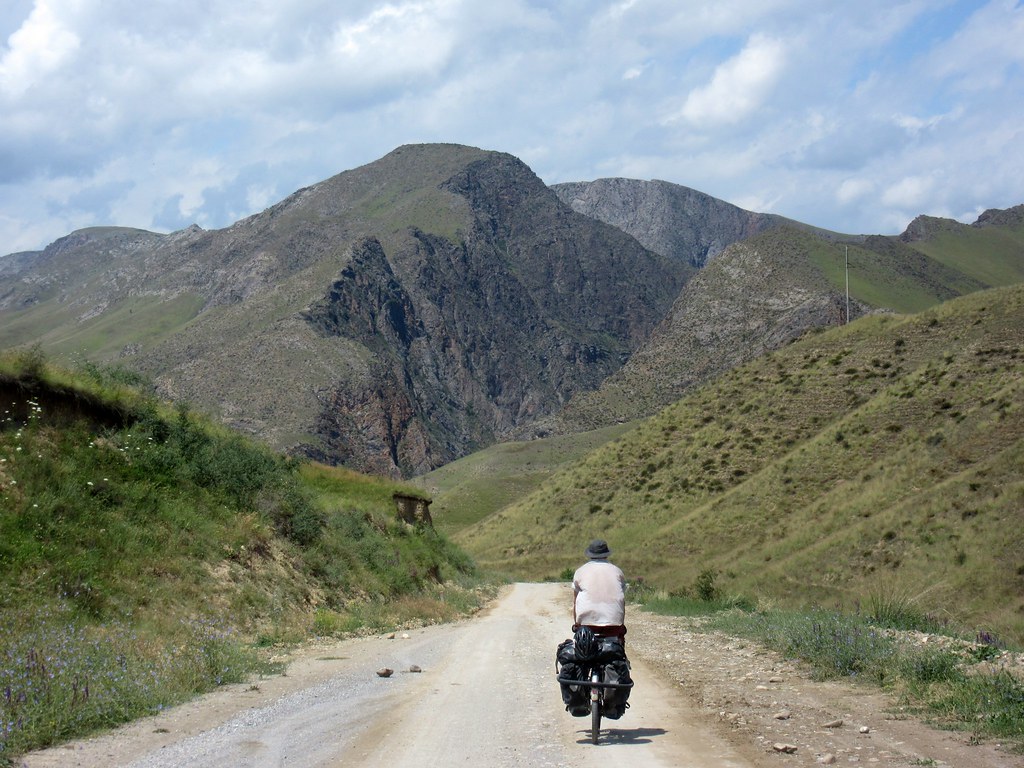 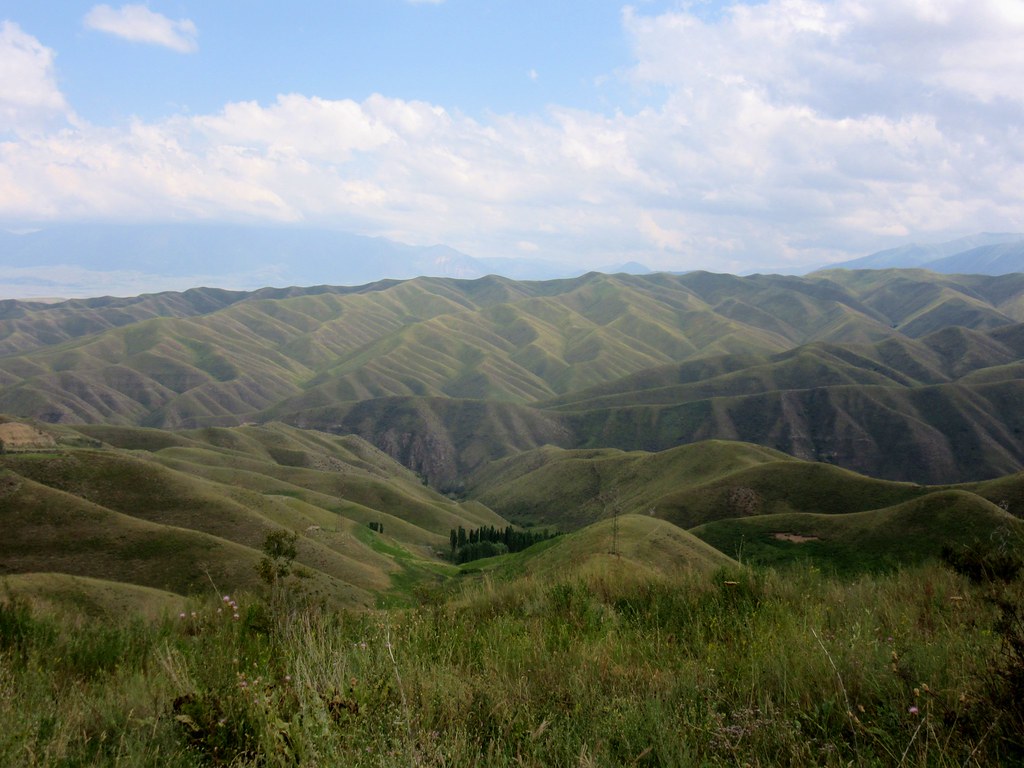 During the night the rain and wind returned but we were fairly sheltered by the mountainsides around us. The morning was dry and overcast, perfect weather for riding uphill. The overnight rain meant there was a lot less dust in the air too, making things a lot more comfortable. We had been nervous about this pass, but it turned out to be not as bad as we expected. Maybe we’re getting fitter or, more likely, the road was smoother and the gradient less steep. As we got higher, the clouds started lifting so we could see more of the mountains around us. It looked like the higher peaks had had some fresh snowfall from the nights storm. We had a couple of breaks on the way up to enjoy the views but by midday we’d reached the top at 3,062m. 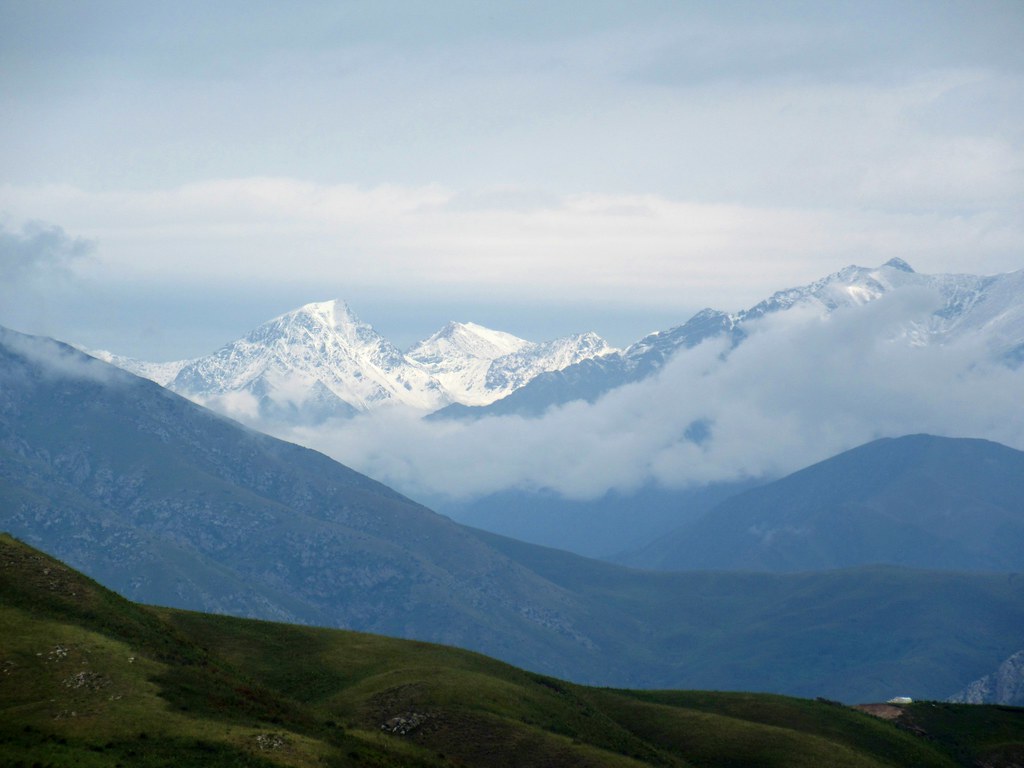 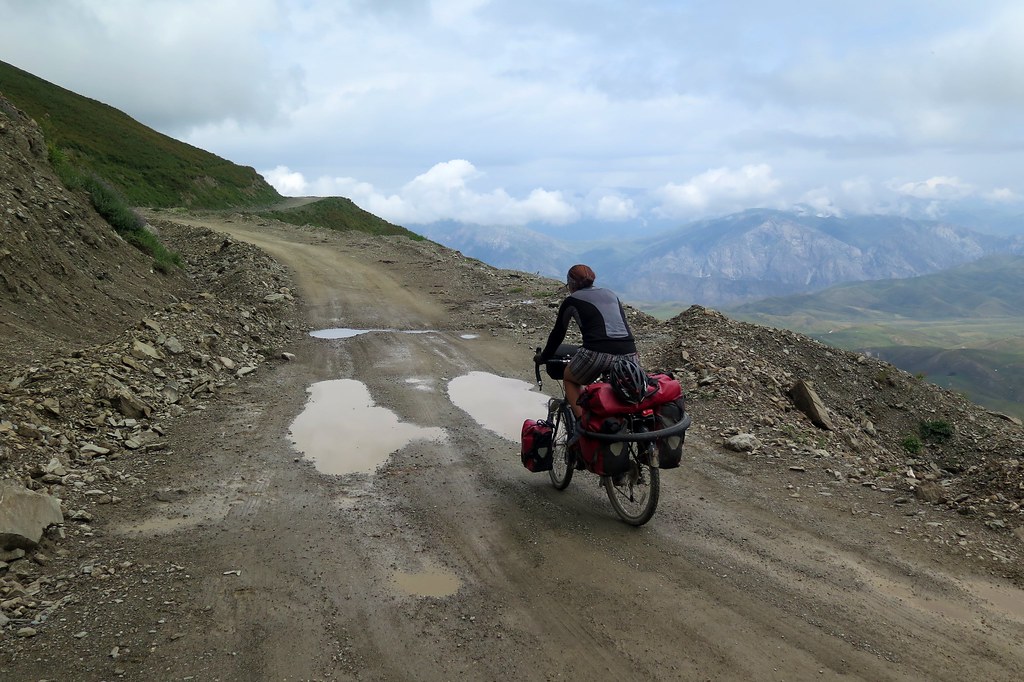 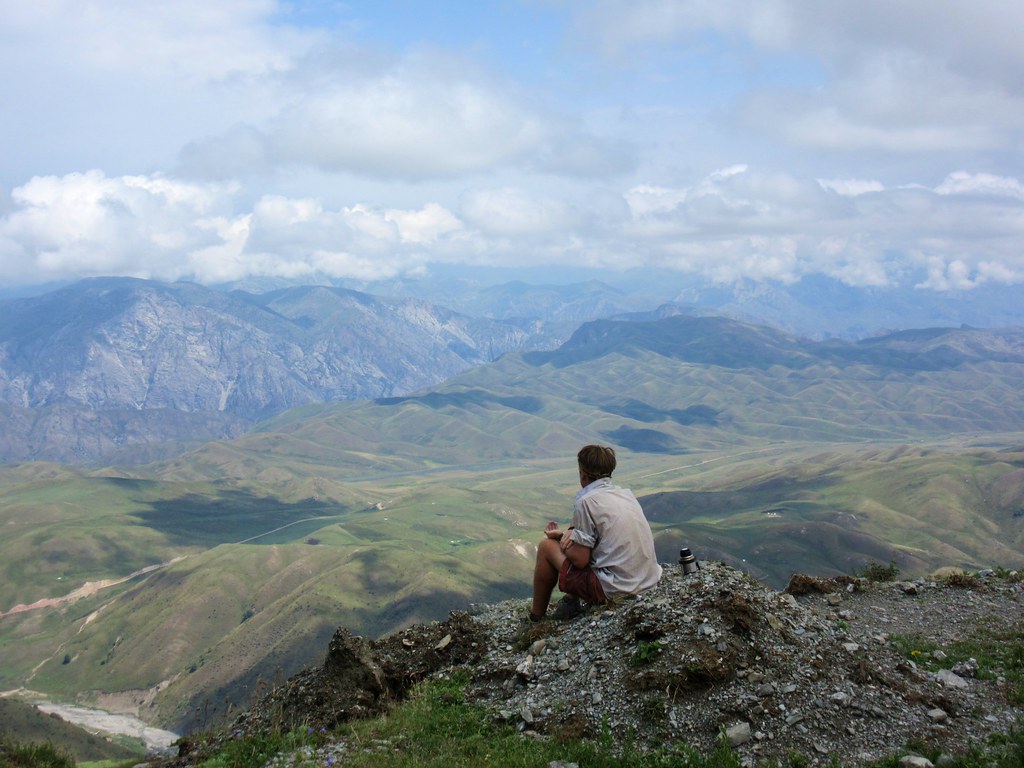 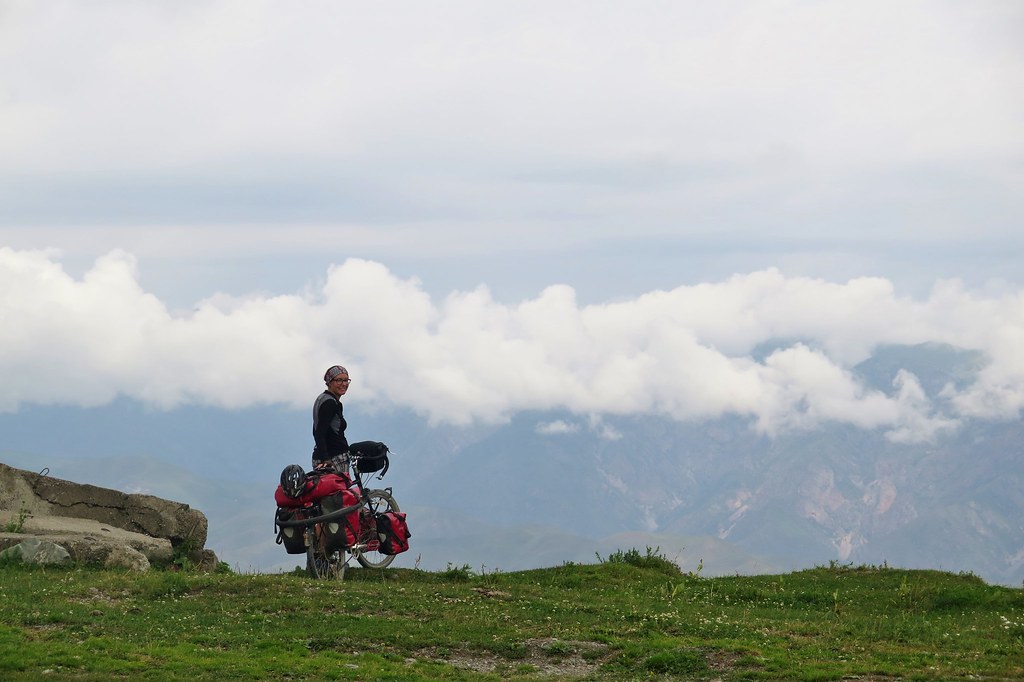 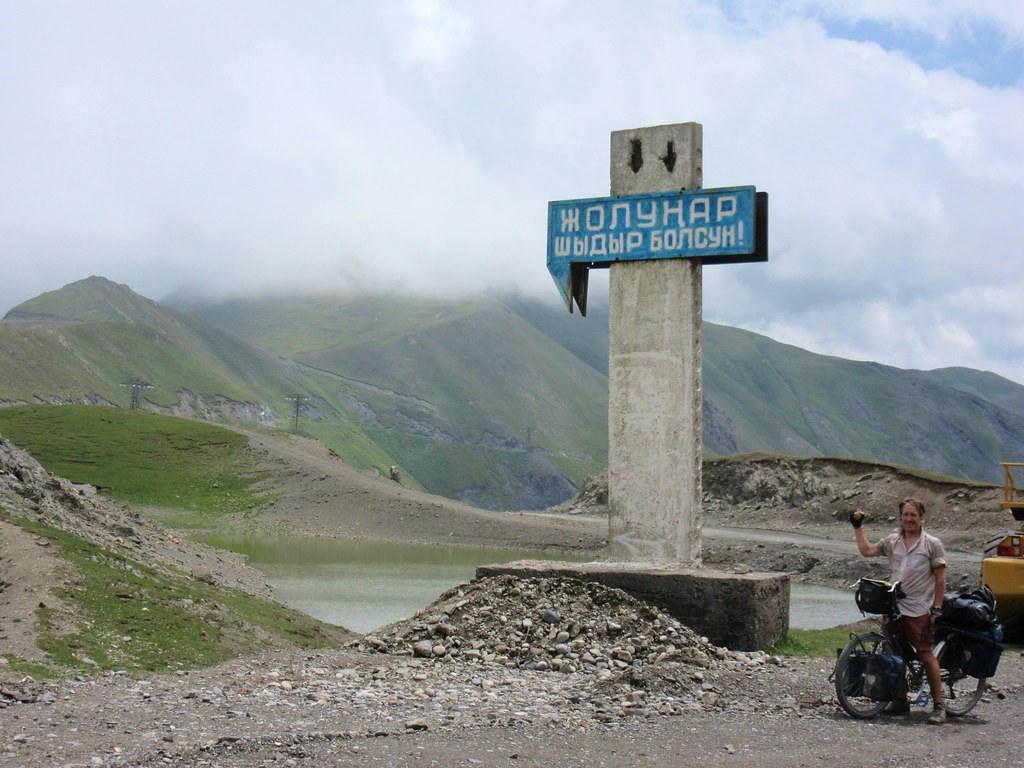 We had a long descent on the far side which was initially quite chilly while we were still high. The road followed a long winding path down, with a good smooth surface which was a lot easier on our wrists than the previous passes we’ve done. We could pick up a bit of speed and enjoy the ride, coasting all the way down to the wide river in the bottom of the valley. We stopped there for lunch under some trees, where we were joined by a couple of Chinese guys who I think were construction workers, working on one of the local roads. We were transported back to China for a while, being offered cigarettes and getting asked how much I paid for my watch. 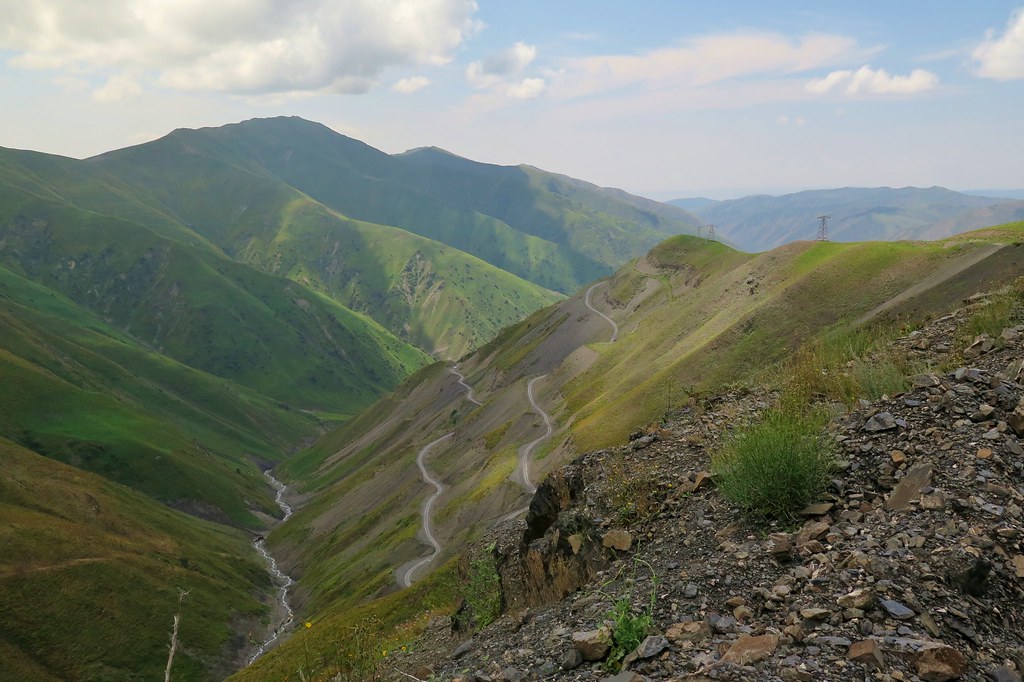 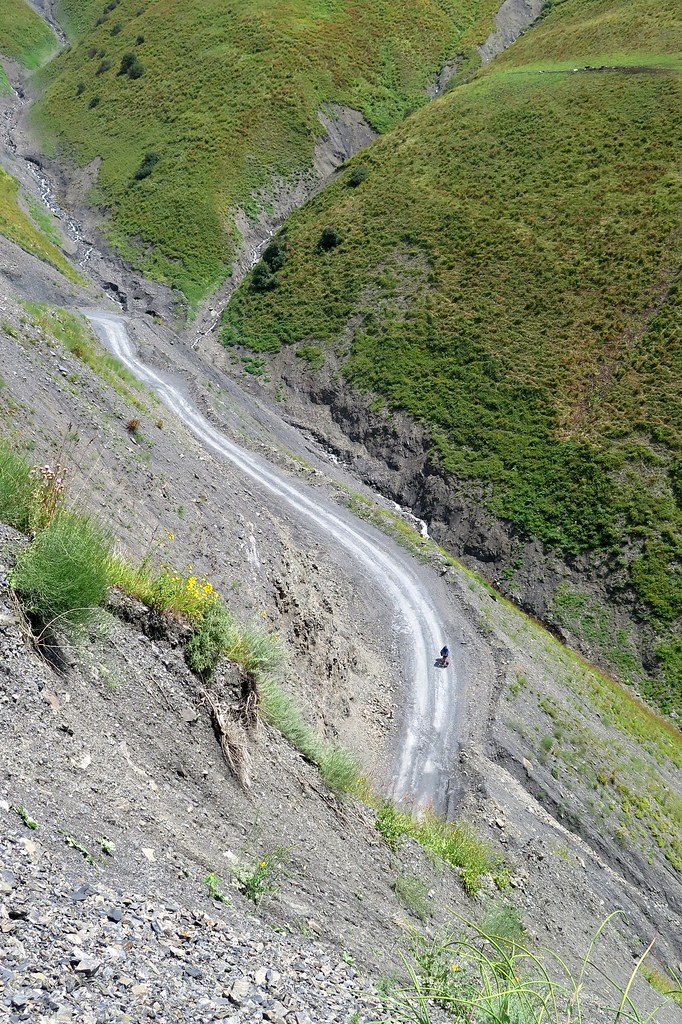 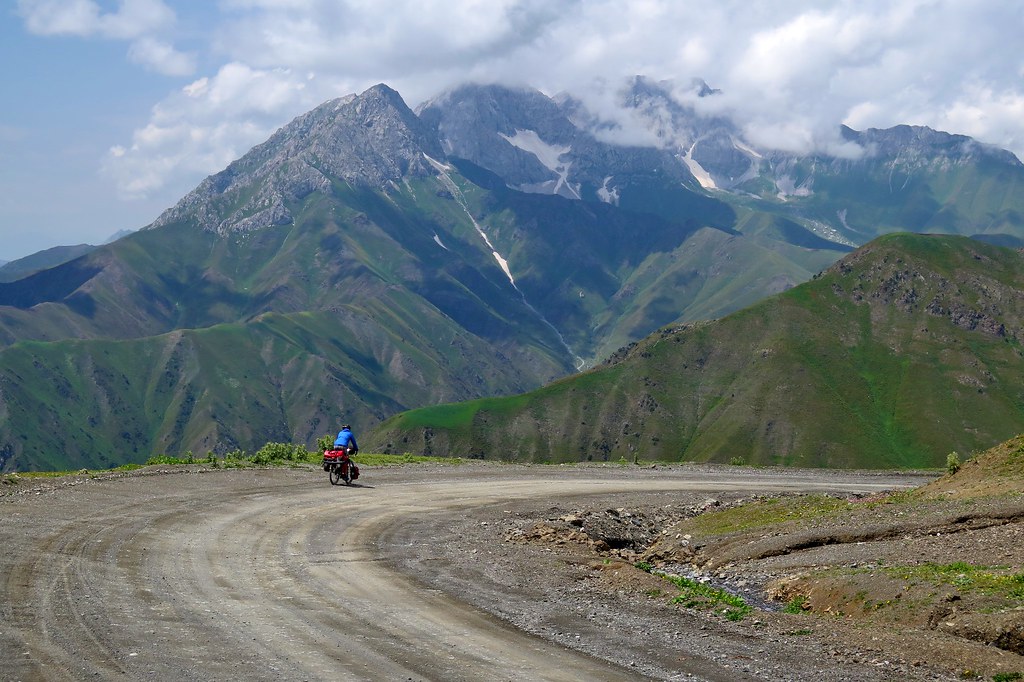 We rode on through the afternoon, following the river downstream, slowly making our way out of the bigger mountains. The valley opened up and by mid afternoon we were in rolling farmland with corn, wheat and sunflowers growing around us. The road got really bad again, shaking us around for a final few kilometres before we reached Dimitriyevka and were back on to gloriously smooth asphalt. There were a couple of magazins in town where we bought some water. The water in the river was really muddy after the rain, so it was good to get some clear water for drinking. The road dipped down into a steep valley to cross the river and from there on we were on the lookout for a campspot. The area was a lot more populated, but luckily we didn’t have to wait for long before we found a nice secluded patch of grass overlooking the valley and out of sight from the road. We cooked up some dinner quickly and got into the tent just in time, before the dark clouds rolled in and the rain started. 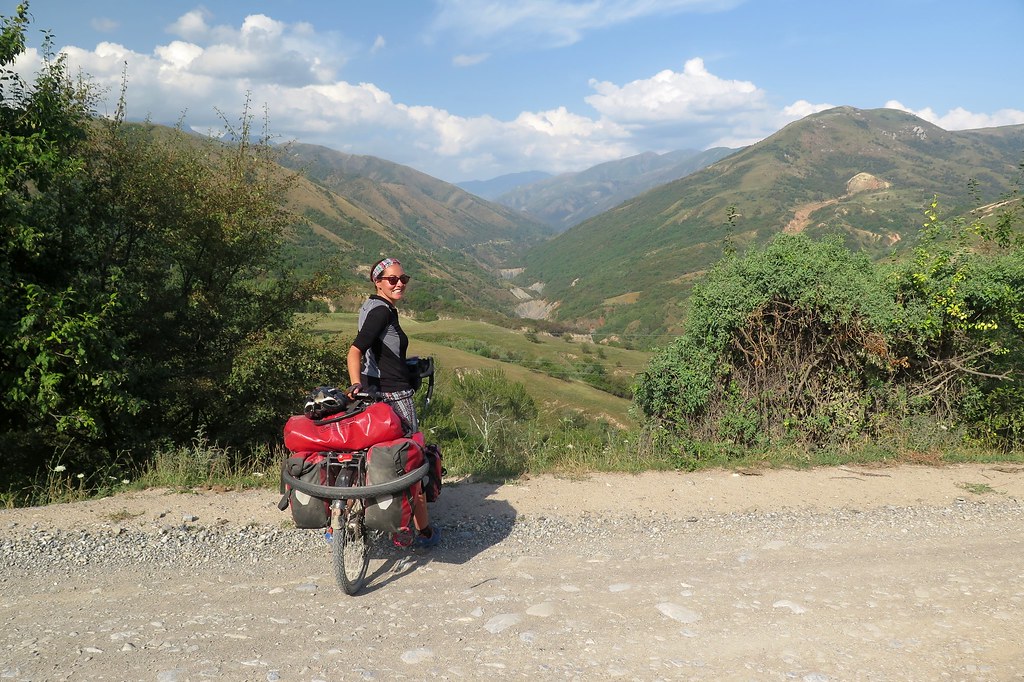 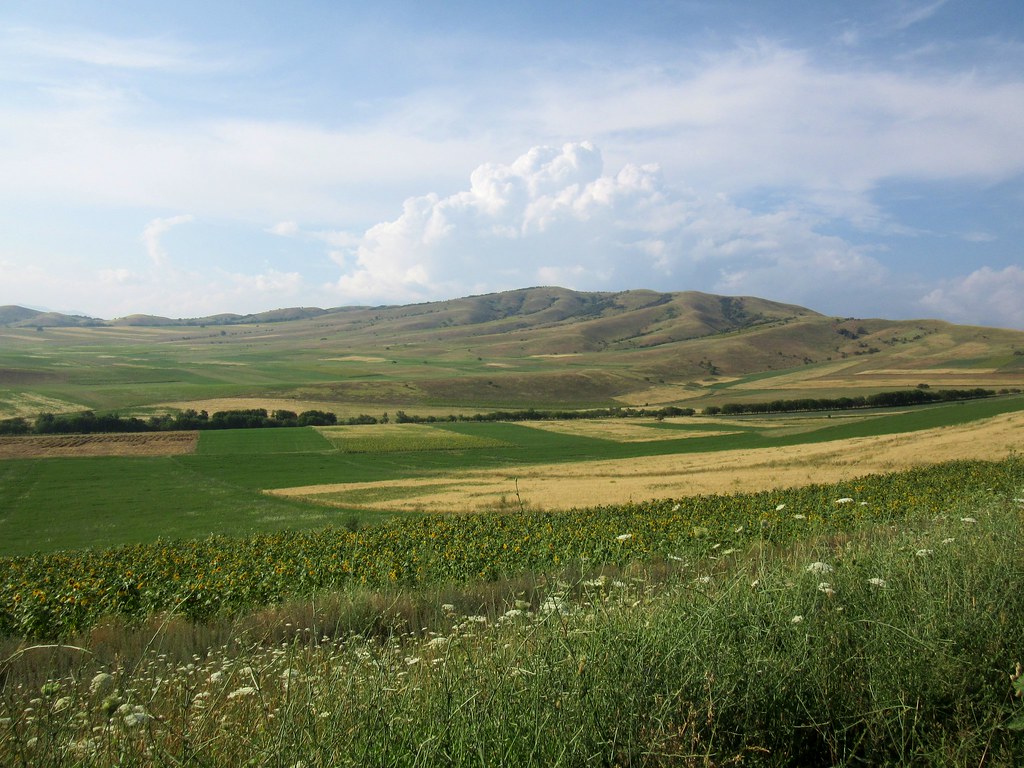 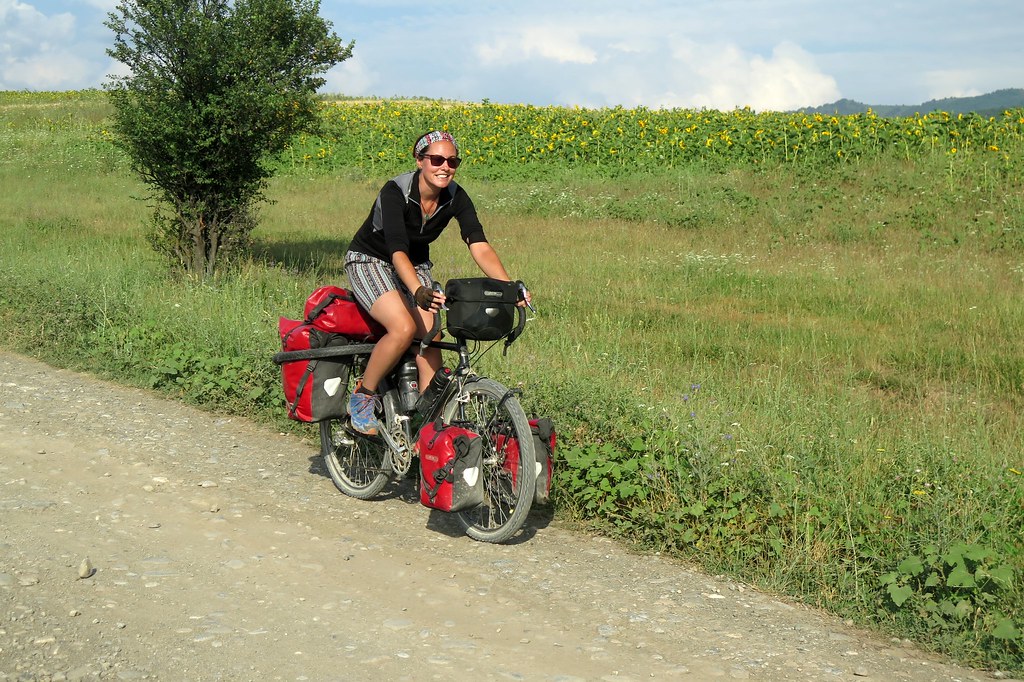 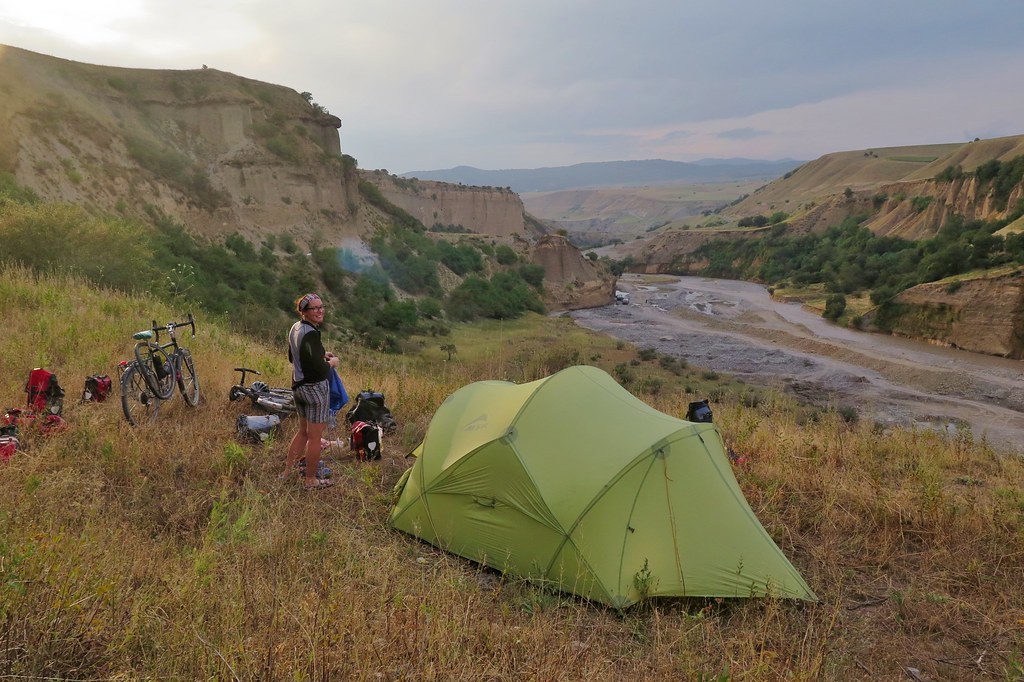 It rained on and off through the night, at times very heavily. In the morning we stayed inside, waiting for a break in the rain to pack up the tent. It was only a short break though, so we got our waterproof gear on to ride the 45km to Jalalabad. Shortly after setting off, we saw a couple of touring bikes leant up against a yurt beside the road. We pulled over and met Claire and Tim, from France. They’re vets and have been living in London for the past three years. They’re riding from Bishkek to Tehran, taking video as they go to make a documentary about their ride focusing on the animals and livestock in this part of the world. It turns out they had seen us just ahead of them on the ride up to Song-Kol and we’d been riding close to them ever since. We headed on, but made plans to meet for a beer once we were in Jalalabad. 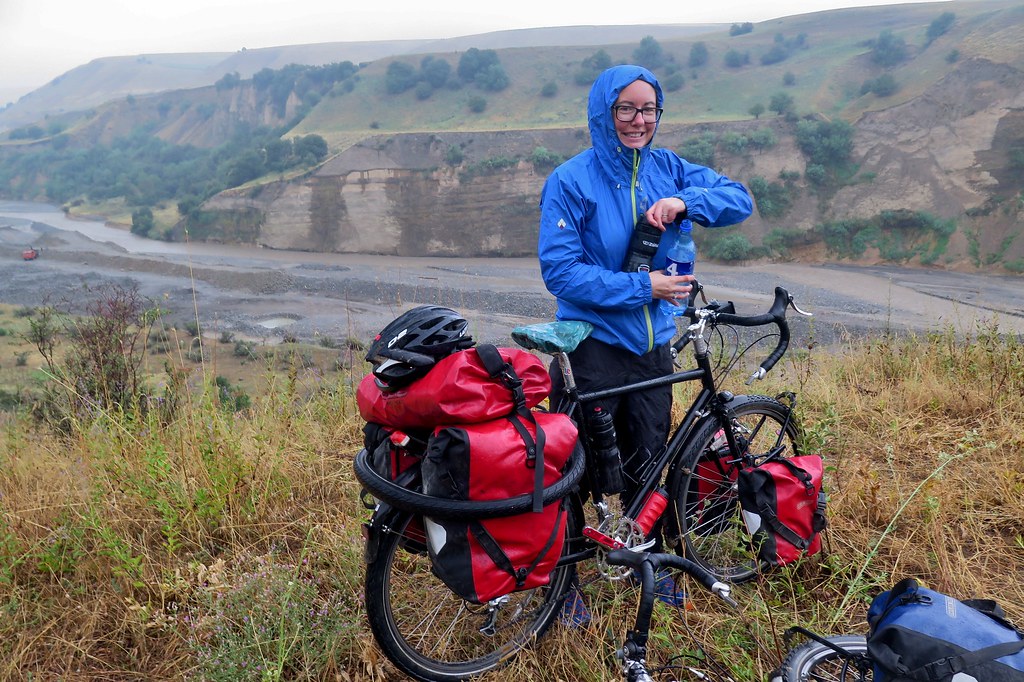 It really shouldn’t have taken long to get there, but there were numerous stretches of roadworks, which were extremely muddy in the rain. Our bikes, panniers and legs were coated in mud and our chains started squeaking and rattling for the last stretch into town. On the way, we met another French couple who were heading on to South Korea and Japan, so we spent a while by the roadside chatting with them. Jalalabad turned out to be quite a big town, we were stopped by the first traffic lights we’d seen in over a week, then we soon found a hotel. After a warm shower and a couple of hours chilling, Tim and Claire came to meet us and we went for dinner and a couple of beers (and maybe a cheeky cognac!) We arranged to meet the next morning to ride together in to Osh. 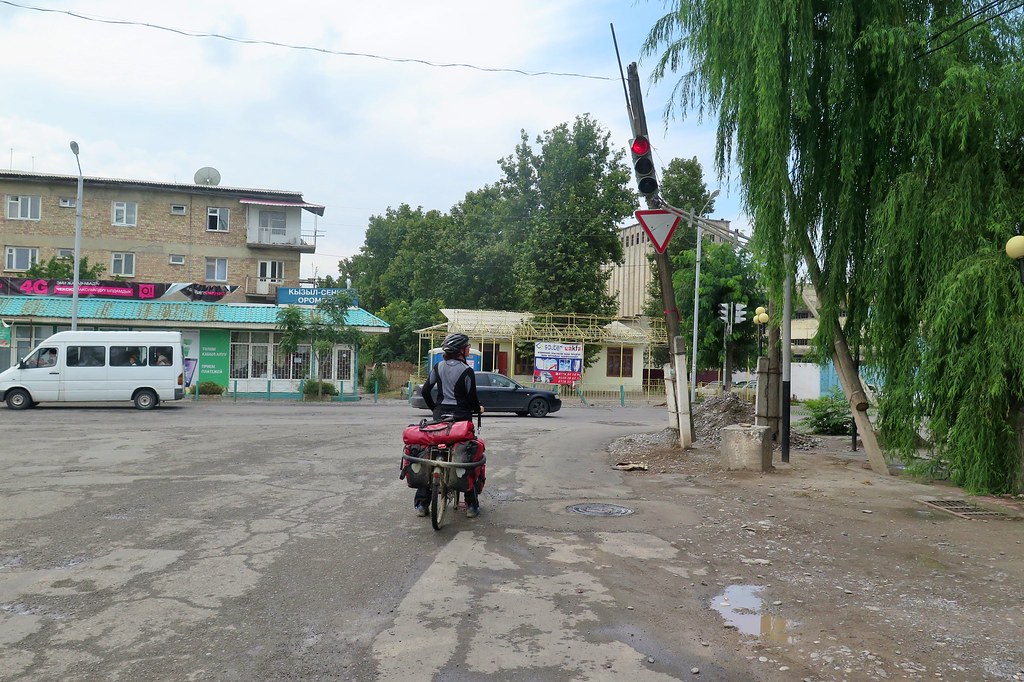 We had around 95 kilometres to cover, the longest we’ve ridden in quite some time. It looked like the road would be good the whole way and it seemed relatively flat so we were feeling confident. But we were faced with a climb almost immediately after leaving Jalalabad. Our bikes, still caked in mud were sounding awful, clicking and grinding through the gears as we rode uphill. The sun was really hot down in this more arid landscape, so the first couple of hours were much harder than expected. 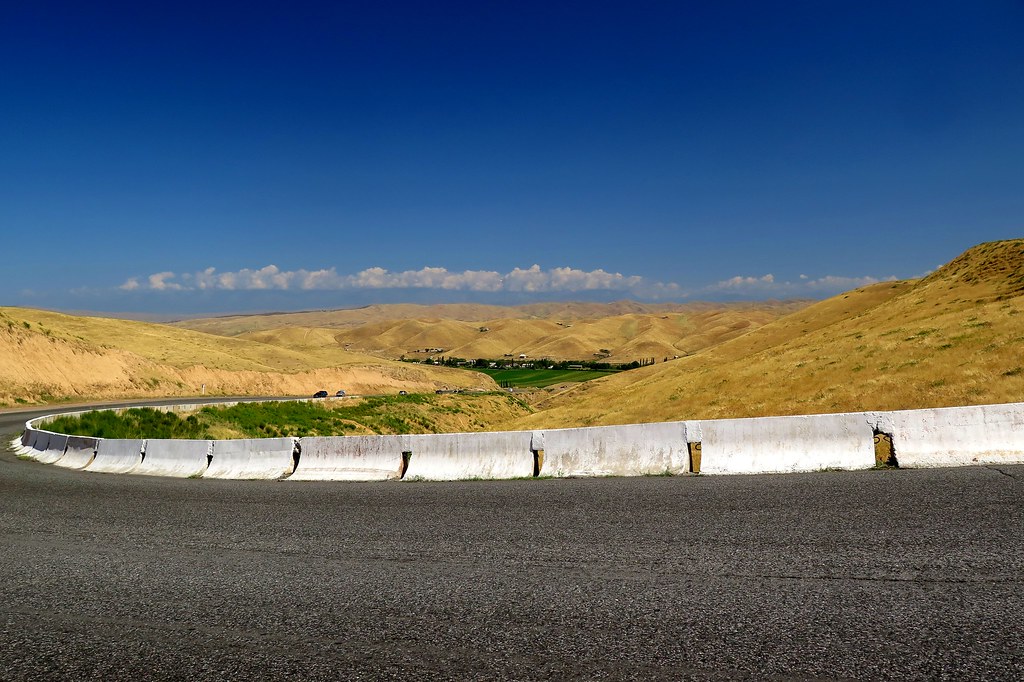 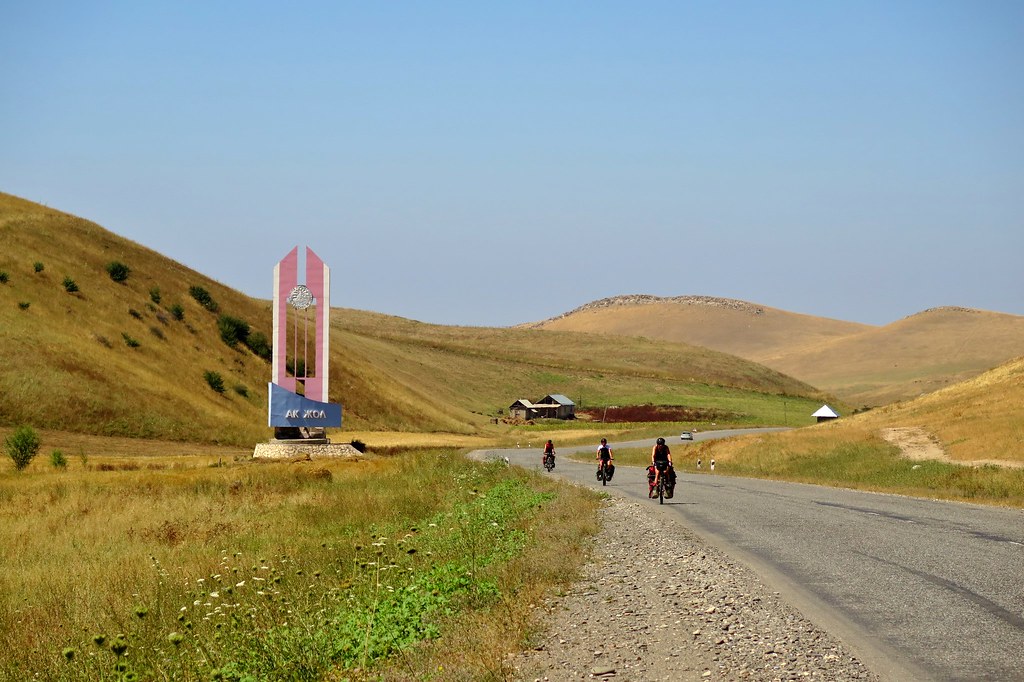 In a straight line, Jalalabad to Osh isn’t a long way. But the direct route would take us through a small area of Uzbekistan that sticks out into Kyrgyzstan, so we had to take the longer route around. We took a small detour to cut the corner, which also got us off the busy main road for a while. We came into the busy market town of Ozgon where we stopped for lunch at a bakery and I quickly cleaned off some of the grime from our chains and gave them some much needed oil. A temporary fix, but at least they were quieter for the last stretch into Osh. 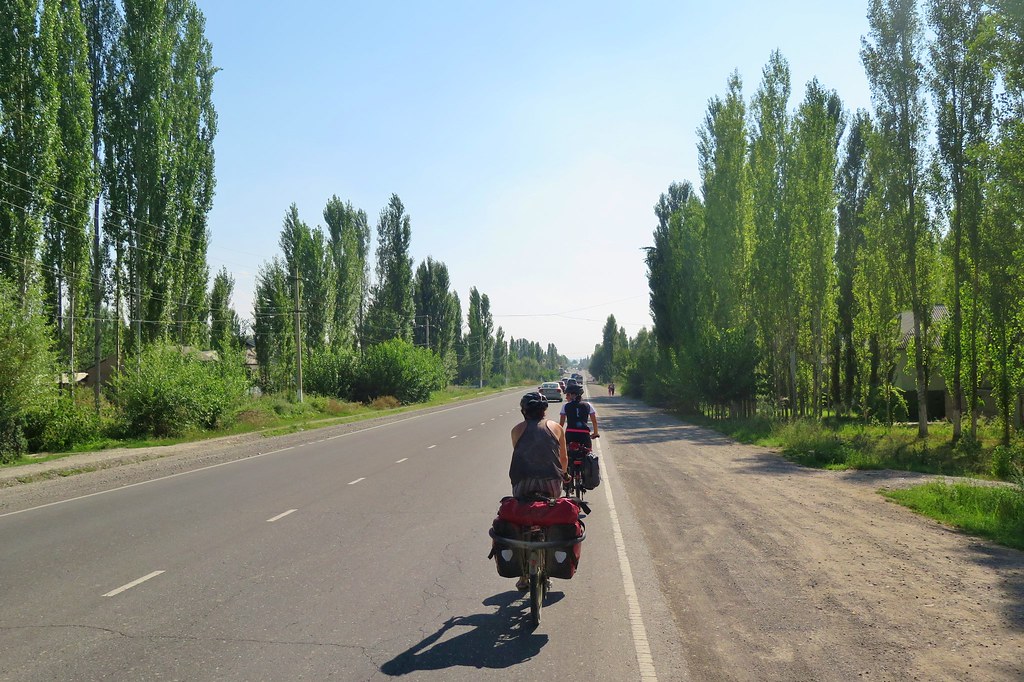 We had about 45 kilometres to cover after lunch. With the smoother roads and busier traffic, we just got our heads down and got it done. We rode quickly as a peloton of four averaging around 25 km/h on the flatter terrain. Before we knew it we were in the outskirts of Osh, Kyrgyzstan’s second largest city. We split off from Tim and Claire, to meet up with them later for pizza and beer, to celebrate their first 1,000km, and our first full year on the road. 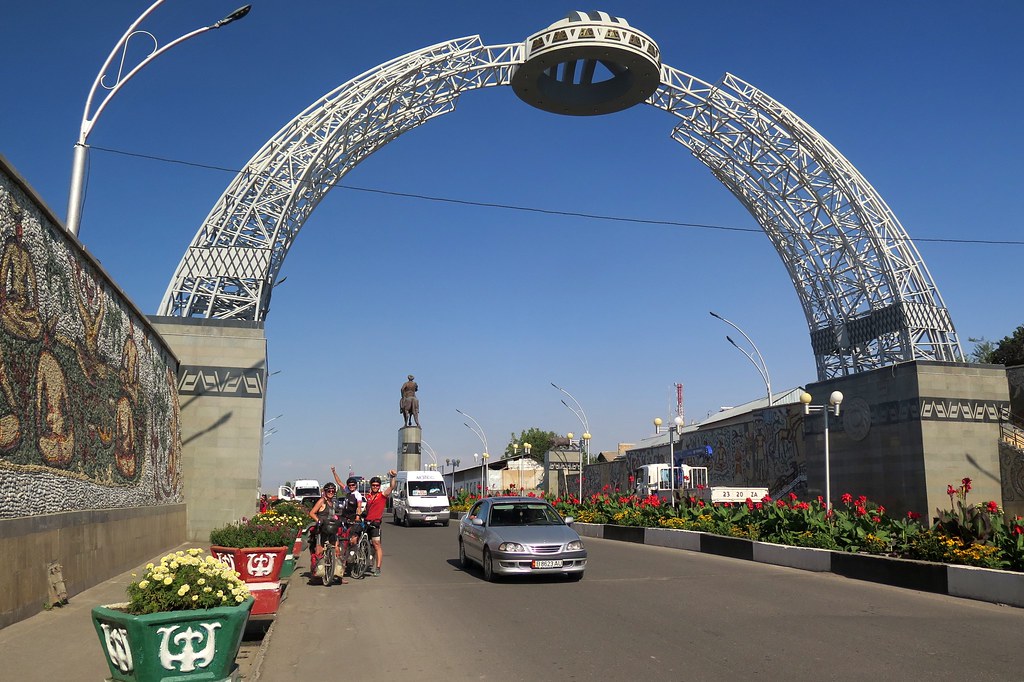 We’re staying in Osh for four days, making the most of some decent restaurants and shops. We’ll load up on food and search the bazaar for a few bike parts before we set off to the south, to take on the big one, the Pamir Highway. 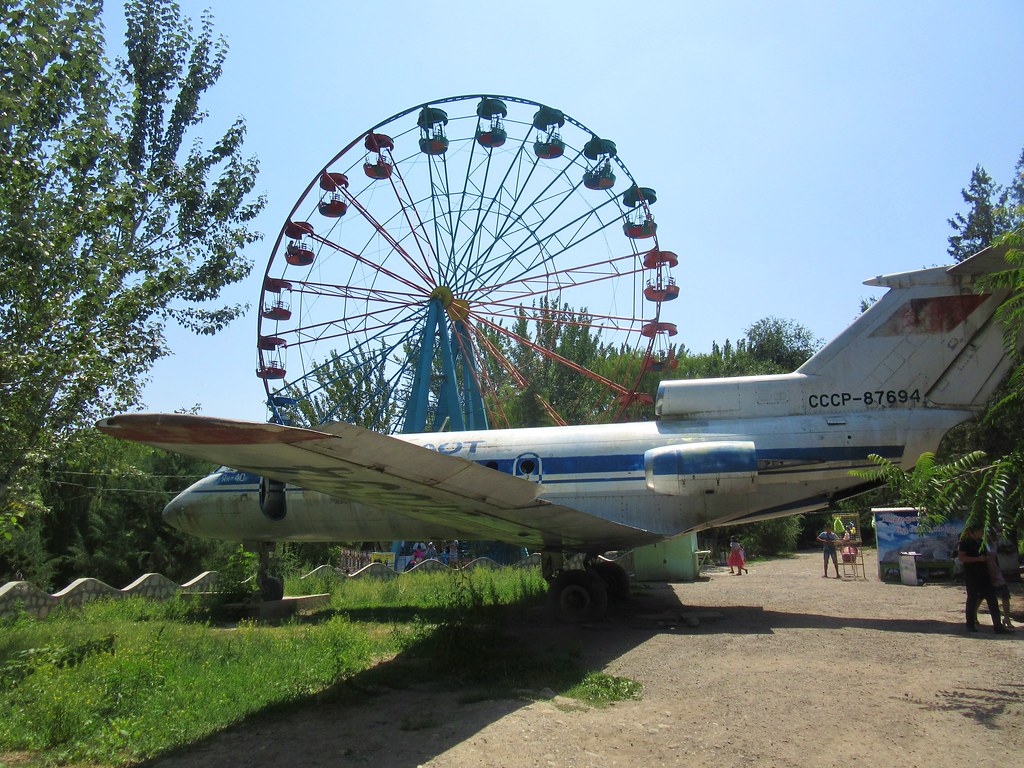 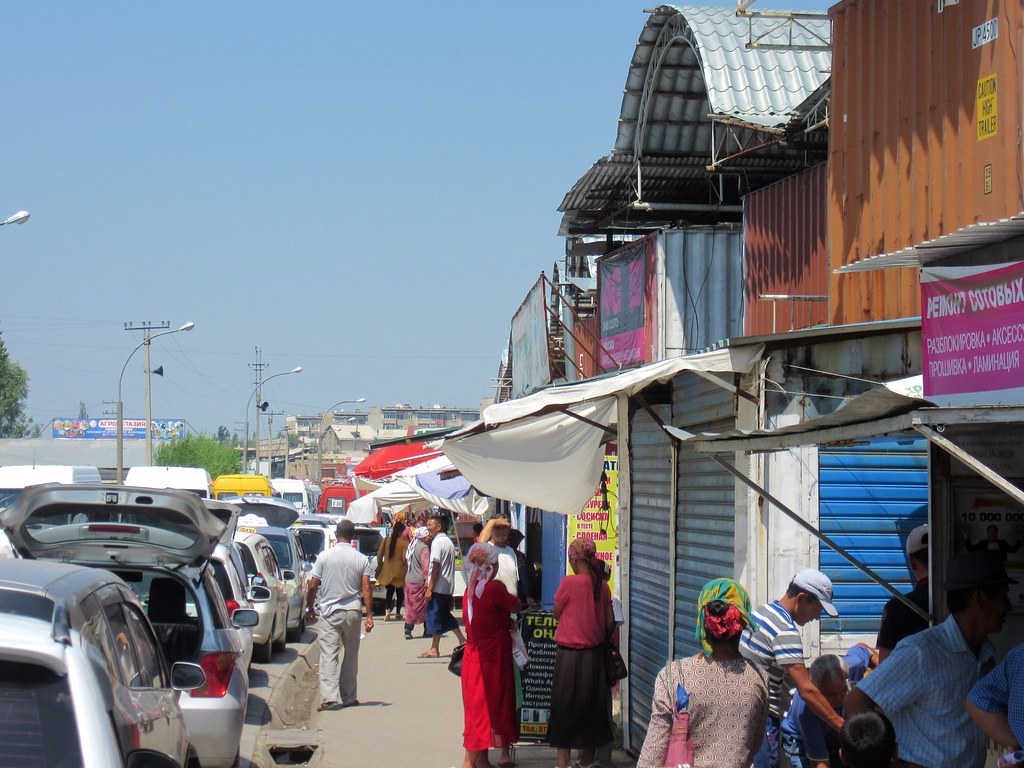 Here’s our route from Kazarman to Osh. 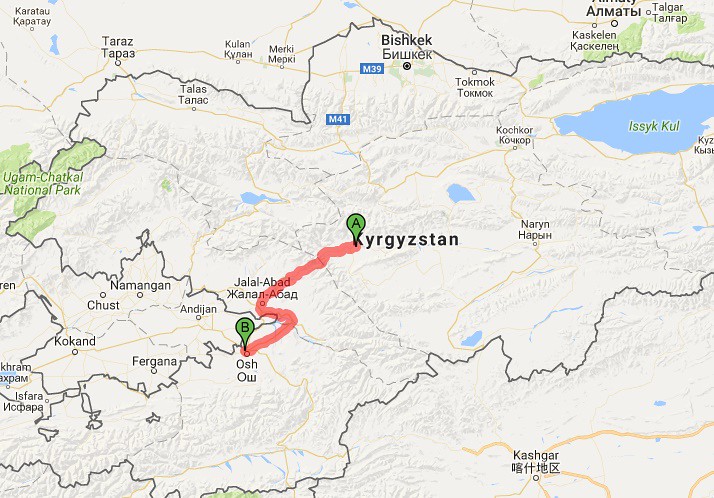